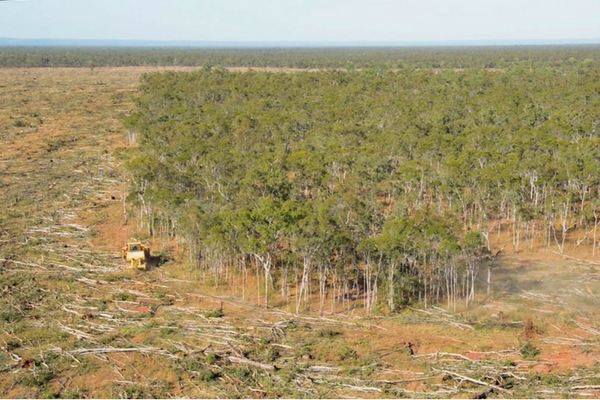 Land clearing (or deforestation) is out of control across Queensland – with latest figures released by the Queensland government showing a staggering 395,000 hectares was cleared in 2015-2016.1

This is a 33% increase on the previous year and places Australia up there with the world's worst countries for deforestation including Indonesia and Brazil.2

Much of this clearing is occurring in the Great Barrier Reef catchments, which only worsens soil erosion and the amount of sediment pouring onto reefs devastated by recent coral bleaching. Over 90% of the clearing is to convert forests and woodlands to pasture for beef cattle grazing, a highly unsustainable industry. It also adds millions of tonnes of carbon dioxide to the atmosphere, undermining claims that Australia can meet its international commitment to reduce emissions.

Land clearing rates have escalated in Queensland following the severe weakening of vegetation management laws by the former Liberal National Party (LNP) government in 2012. The Palaszczuk Labor government then failed to pass stronger laws because the crossbenchers in parliament refused to support the legislation. Now we are left with a situation where forests and habitat across Queensland can be bulldozed and destroyed for any number of reasons – and the government does little to stop it.

In the Far North of the state an estimated 47,835 hectares were cleared in 2015-2016, wiping out habitat and ecosystems in the Wet Tropics, Cape York, Gulf Plains and Einasleigh Uplands. These areas are highly sensitive, and support some of the richest biodiversity in Australia. When these forests and bushland areas are cleared and then burnt, millions of native animals also perish because their habitat is destroyed. They often cannot relocate elsewhere because those areas are not suitable, or are habitat for other wildlife populations.

It's a terrible image for visitors ‒ promoting Far North Queensland for its World Heritage listed coral reefs and rainforests and then allowing clearing which destroys these environments. The Great Barrier Reef and Wet Tropics Rainforests are worth billions to the regional economy every year and are the mainstay of the regional tourism industry.3 We should be protecting them at all costs.

Land clearing is again creating an environmental crisis in Queensland and the state government needs to fix it immediately. Vegetation management regulations need to be tightened and enforced so that broad-scale clearing is abolished across Queensland. All remnant vegetation needs to be fully protected, as well as regrowth in highly sensitive areas around the state. Loopholes that allow clearing for dubious practices such as 'thinning', need to be removed from any future legislation. Incentives should also be made available for landowners who want to reforest and protect habitat on their land.

Dr Henry Boer is a member of Friends of the Earth Far North Queensland.