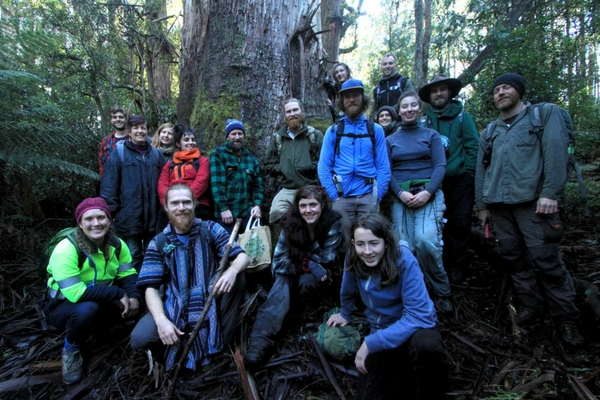 On Saturday a large group joined local GECO campaigners to walk to the "Big Tree" in the Gap scenic reserve. The walk passes through old growth forest that was scheduled for logging until GECO campaigners found one of Victoria's largest trees and lobbied the state government to protect the forest.

The area was saved from logging and is now one of the best old growth forest walks in Victoria, complete with a boardwalk made from recycled plastic that protects the rare rainforest and roots of the giant tree.

Surveys near Bendoc on Saturday explored montane woodland that is scheduled to be logged. Hollow bearing tress and potential greater glider habitat was marked in preparation for a nocturnal spotlighting survey the following night.

GECO campaigner Ed Hill gave an overview of GECO's work, local ecologist Rena Gaborov delivered a fascinating presentation about the ecology of the greater glider that examined reasons for the species decline.

Tom Crook from the East Gippsland Rainforest Conservation Management Network (EGCRMN) taught us about the evolution of  temperate rainforests and the work the EGRCMN are doing to restore and protect rare remnant rainforests in East Gippsland.

On Sunday a smaller group helped EGRCMN to search for rare yellow wood rainforest trees in the Martins Creek national rainforest site of significance. Another group walked through old growth forest on the Errinundra plateau that is earmarked for logging.

The group deployed a fauna camera to capture image of threatened wildlife that may be using the forest. The camera is targeting endangered and elusive Spot tailed quolls who have suffered declines in East Gippsland but may still be present in the Errinundra area.

Saturday night was a spotlighting marathon! Forty people split into four groups and conducted four spotlighting surveys in forest scheduled for logging near Bendoc. All groups recorded several greater gliders whose habitat is under imminent threat from planned logging. Two groups recorded high densities of greater gliders (more than 10) that will result in the preparation of a report to be submitted to the state government this week. This report should result in a new protection zone and prevent logging in some of the areas that were surveyed.

Greater gliders were also found in two other areas of forest where logging is planned, however not in high enough numbers to trigger protection. Unless GECO can find more gliders in these forests habitat will be logged due to out dated and weak protections.

The greater glider was common across south east Australia twenty years ago but has declined by 80% across its range. Last week the greater glider was officially declared a threatened species under Victorian law but logging is still occurring with outdated, weak protections in East Gippsland and no protection elsewhere in the state.