What is food irradiation?

Why are the Queensland government and Food Standards Australia New Zealand (FSANZ) fast-tracking a blanket approval for the irradiation of all fruit and vegetables?

Why does this matter?

What has been approved to date?

Why do we recommend that FSANZ reject A1193? 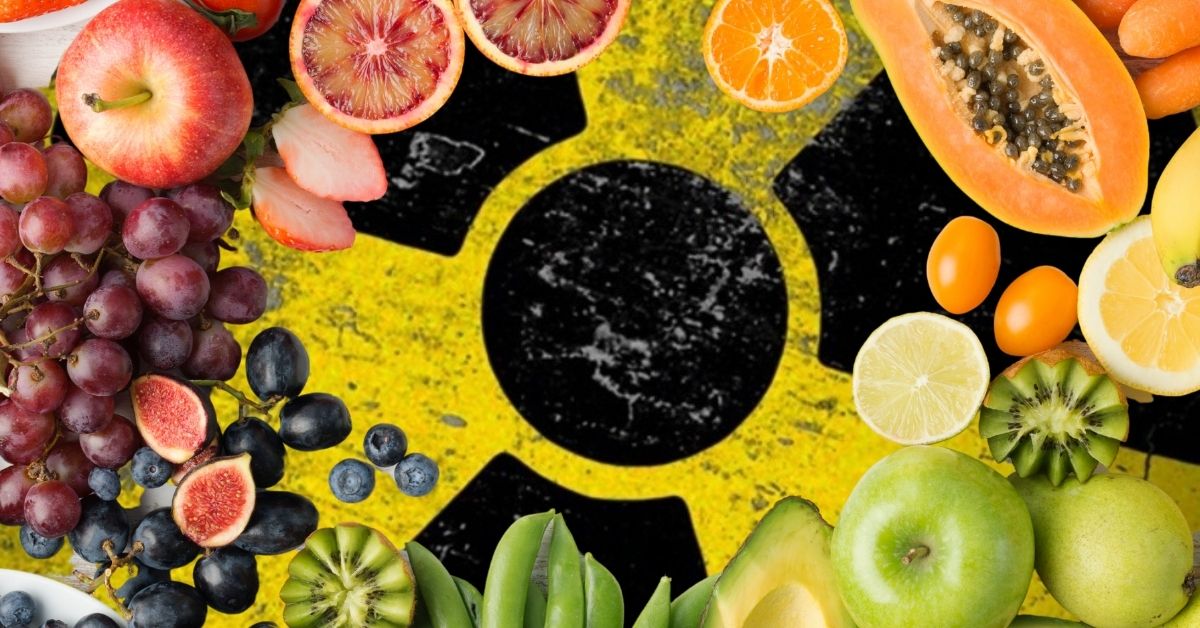 What is food irradiation?

Food Irradiation is the process of exposing food to ionising radiation from Cobalt-60, X-rays or electron beams. The food is mostly treated to neutralise pest insects or microbes, and to extend its shelf life.

The Australian government has allowed food irradiation since 2001 after a 10-year moratorium was  lifted. Since then, Australia and New Zealand government-supported industry campaigns have  promoted irradiation as an ’alternative’ to pesticides. Irradiated food is labelled, albeit inadequately.  There has been an ongoing push to remove mandatory labelling requirements.

Irradiation uses ionising radiation, which alters food’s molecular structure, but leaves it looking the  intact.  Substances produced by exposure to radiation are known as radiolytic products. Their presence indicates whether or not a product been irradiated (Chauwan, S. et al. (2008). Detection methods for irradiated food. Comprehensive Reviews in Food Science and Food  Safety, http://onlinelibrary.wiley.com/doi/10.1111/j.1541-4337.2008.00063.x/full).

Different foods react differently to  radiation. The changes in them mean that Irradiated produce is processed; it is no longer fresh.

Why are the Queensland government and Food Standards Australia New Zealand (FSANZ) fast-tracking a blanket approval for the irradiation of all fruit and vegetables?

In January this year, Food Standards Australia New Zealand (FSANZ) published an announcement  that it would assess and application by the Queensland Department of Agriculture and Fisheries to  allow the irradiation of all fresh fruit and vegetables.  The published proposed timeframe for the assessment of this application, known as A1193, would see work commencing in November 2020  and public consultation taking place next year- early April 2021.

On October 30, however, FSANZ notified the public of a 6-week timeframe to respond.  We now  know that in May, the Queensland government paid to fast-track the processing of the application.   This information was not published on the A1193 webpage, nor was it published in FSANZ  notification circulars.  In fact, while the application was re-announced in May, there was no reason  given for the re-announcement and no change to information previously provided.  The A1193  webpage continued to display only material that suggested the public consultation dates were April  next year.

As our food safety regulator, FSANZ is mandated to ensure an affective, transparent and  accountable regulatory framework, within which the food industry can work efficiently. Public notice  requirements are intended to promote accountability and transparency in the regulatory  framework.   In fact, the FSANZ Act 1991, states that FSANZ must provide the public with a  timeframe for its work and also update the public of a new timeframe for carrying out work if it  accepts funding for it. FSANZ has not done so.

Why does this matter?

The regulatory system requires citizen participation to function  democratically.  As it stands, a paying applicant (the Queensland government) has asked for  regulatory changes that it sees will benefit certain industries. It has then paid to alter the timeframe for processing and receiving feedback for the proposal. The public was not explicitly informed of  these changes. The applicant and irradiation proponents are aware of the application and able to  respond within a new timeframe – but their information channels do not reach out to the broader  public or those without a special or vested interest in the matter.  Nor do channels of FSANZ.  FSANZ  relies on consumer advocacy and grassroots organisation to publicise these issues with their  constituents and take the issues to the broader public.  To hinder our participation by altering the  timeframe means that YOUR voice, the voice of the general consumer, and the input of diverse  industries will not be represented in the so-called public consultation.

Friends of the Earth/Food Irradiation Watch have monitored and responded to every irradiation  application made in Australia and NZ since the moratorium on food irradiation was lifted in 1999.  With our colleagues in Gene Ethics, we have been monitoring A1193 as well and expecting to work  on it from Dec 2020 on.  There was no indication that we needed to otherwise. As volunteer-run  networks, timeframes and public information matters AND….

While food irradiation applications have been approved, without  community scrutiny, FSANZ and irradiation proponents would have been able to fast-track more  applications and use less discretion. They could have been less rigorous in their science and they  would have most likely removed all labelling requirements for irradiated food too. Labelling was  under threat after the federal government’s 2011 Labelling Logic recommended its “review,” with  proponents suggesting that it was not necessary and was an impediment to the uptake of the  technology. It took 6 years of lobbying and community engagement for food ministers in 2017 to  support the wishes of the overwhelming majority of Australians and New Zealanders and leave mandatory labelling in place. Citizen action, not the government or industry, has defended our right  to know!

What has been approved to date?

Now, they want to pass a blanket approval for the irradiation of all fruit and vegetables.

Why do we recommend that FSANZ reject A1193?

Nutrition: Irradiation depletes the vitamin and nutritional content of food. FSANZ generally says that the decrease is no more than with cooking – but who expects their fresh fruit to be pre-cooked or for their cooked veggies to lose double the amount of nutrients?

Radiation Exposure to radiation changes the composition of the food producing “radiolytic products” including free radicals, various hydrocarbons, formaldehyde, amines, furan and 2-alkylcyclobutanones  (2-ACBs) (FSANZ A1092).” (A1193, SD1 p 15) Some of these may be harmful. “Furan is carcinogenic to rats and mice, and is classified by IARC as possibly carcinogenic to human beings (Seok et al. 2013) (A1193, SD1 p 19). 2-ACBs have been linked to DNA damage in humans and cancer in rats. FSANZ does not deny that radiolytic products may be harmful; FSANZ (CFS A1193, p 2) states that:

“Radiolytic compounds generated through food irradiation are not  produced at levels that are likely to result in harm.”

But the levels can change.

There is no guarantee that FSANZ will not approve an increase in the permitted radiation exposure  levels. Already, some foods, herbs, spices and plants for herbal infusions are approved at much  higher levels. The CODEX general standard, which FSANZ refers to  expand permits, allows irradiation up to 10kGy, significantly more that the 1kGy requested in this application.

Irradiating of all fruit and vegetables would adversely affect the nutritional value and safety of  significant components of the Australian and New Zealand food supplies.

While irradiation uptake is currently low, it is clear that Australians are increasing the  amount of plant-based foods in their diets. A blanket approval for all fruit and vegetables could lead to the irradiation of a large part of certain communities’ diets. 2019 figures from research company Roy Morgan show that almost 2.5 million Australians or 12.1 per cent of  the population now have diets where almost all the food is vegetarian.

The nutritional and safety assessment fails to include research that questions the safety of irradiated foods and does not present evidence of the safety of a largely irradiated diet. Safety cannot be presumed.

In fact, there has been no systematic data collection or published research to support the claim of  safe consumption. Only relatively small amounts of a few foods have been irradiated and eaten, for  various lengths of time, and no long-term studies have been conducted on human consumption of  irradiated foods.  Indeed, FSANZ (A1069, SD1 p. 3) admits that:

"No consumption data are available, but the amounts sold into the retail trade are known  approximately. As the foods have been retailed for several years in a few thousand retail outlets  (Eustace & Bruhn 2006), it may be presumed that retailers are actually selling most of the  product."

FSANZ makes the fundamental error of asserting that a lack of evidence of harm is the same as evidence  of safety. Suggesting that food irradiation has been proven safe - without any kind of surveillance  system - is scientifically indefensible.

Irradiated pet food was responsible for the death and injury of a significant number of cats in Australia, leading to its ban. FSANZ has failed to even mention this or include relevant research in its assessment of A1193.

In 2008-9, 87 Australian cats died or were paralysed after consuming irradiated cat food (Child, G, Foster, DJ, Fougere, BJ, Milan, JM, Rozmanec, M. (2009). Ataxia and paralysis in cats in Australia associated with  exposure to an imported gamma-irradiated commercial dry pet food. Australian Veterinary Journal 87, 349-351.) FSANZ’s initial response (See for example FSANZ (2011) Application A1038 irradiation of persimmons approval report, p. 9) was to exclude the research from its assessments because it had already concluded that the illness was cat specific, despite a lack of solid scientific evidence for this claim.

Until the mechanisms of these adverse health impacts are fully explored and understood, and negative impacts on humans and other species are absolutely ruled out, no irradiated foods should be allowed to  enter the human food supply.

There is no technological need for irradiation as numerous alternatives exist, such as pest-free zones,  physical disinfestation and organic agriculture.

Delayed ripening: Many fruits such as bananas and papaya can be picked at a green stage  when they are not hosts for fruit flies. They will ripen at the market.

Whole of systems approach: This requires an orchard management system that involves  fruit fly baits, traps, removal of all fallen and over-ripe fruit, as well as having a harvest  maturity index from fruits.

Irradiation is a tool of large agribusiness and will be used on top of, not instead of, chemical treatments.  So far, there has been little research into the interaction of radiation on pesticides and GMOs. Australia  has a growing organics industry which thrives without the use of any of these technologies.

Labelling requirements are weak and there is no way to visually distinguish between irradiated and non irradiated foods. Thus, shoppers depend on the integrity and comprehensiveness of irradiation labelling.  bars, etc. As there is no simple, reliable and affordable test for irradiated foods, it is difficult for state  and local authorities to monitor them in the marketplace and to enforce the labelling requirements. It is  unclear whether or how FSANZ or state authorities will monitor the labelling of irradiated food as well  as the food purchased and then used in commercial kitchens, restaurants, juice bars, etc.

A1193 cannot be claimed to be a mechanism for aligning Australia with overseas regulations or  practices. The EU, for example, only permits the irradiation of herbs and spices.  Japan only permits the  irradiation of potatoes. Despite international agreements stating that they may, many other countries  do not have blanket approvals for all fruit and vegetables.

Finally, the applicant is the Queensland Government, which also participates in the health and safety  assessment of the application. This presents a clear conflict of interest which casts substantial doubt on,  and undermines consumer confidence in, the ability of FSANZ to protect the public health of all Australians.

We are gravely concerned that the Queensland government has attempted to fast-track A1193 and that  FSANZ has changed the dates of public consultation without clear notification to the public.  The  purpose of the Food Standards Act is to ensure public health protection via, amongst other things,  “an affective, transparent and accountable regulatory framework, within which the food industry  can work efficiently.”  Public notice requirements are intended to promote accountability and  transparency in the regulatory framework. We assume that their intention is also in promote  public engagement.

By changing the date of public consultation, unannounced, FSANZ has limited the scope of possible community engagement beyond FSANZ’s networks, disadvantaged the community it is meant to protect and represent and thus failed to provide opportunity for the robust community conversations required in a functioning democracy.