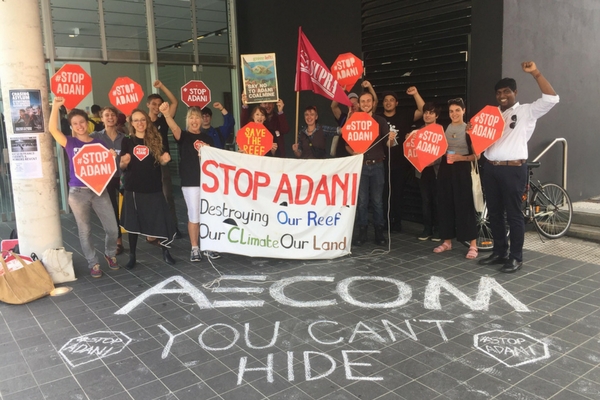 US-based engineering and design firm AECOM’s graduate outreach program has been thrown into disarray, with protests and cancellations impacting most events.

Of the 16 Graduate Career Information Sessions scheduled this month, eight have been cancelled and another five have faced protests, with questions on Adani and AECOM’s role in the coal industry dominating the question time.

AECOM also pulled out of the JCU career fair in Townsville on 13 March due to planned protests from students and the local #StopAdani group.

AECOM is contracted to carry out the surveying and design work for the Adani Carmichael coal project railway line in central Qld.

“AECOM markets itself to students as a workplace that creates a better world, but is actively helping Adani in their plans to open up the massive Galilee coal basin. The protests at universities have meant AECOM was unable to pull the wool over students’ eyes”, said Market Forces Campaigner Pablo Brait.

“Adani’s Carmichael mega mine is not just devastating for the environment, it has proven time and again to be brand kryoptonite for companies working with Adani on the project” said Brait.

“Any prospective employee of AECOM needs to know that they would be working with one of the few remaining companies in the world that thinks it’s ok to open up a massive new thermal coal basin while the clock rapidly ticks down on our chances to avoid catastrophic climate change.”

“AECOM was the 8th most popular graduate destination in 2017 according to an Australian Financial Review survey. It is likely this popularity will be short lived if the company remains linked to a project opposed by two thirds of Australians.”

This media release was published by Market Forces a Friends of the Earth Australia affiliate member.

Whilst you are here, please make a tax deductible donation. Friends of the Earth relies on donations from people like you to keep running campaigns for social and environmental justice.
Donate now
Media Release Stop Adani