Alliance of the Solwara Warriors: Our culture, our heritage, our future

The Solwara Warriors are fighting deep sea mining in the Pacific, Jonathan Mesulam and Nat Lowrey write for Chain Reaction #141. 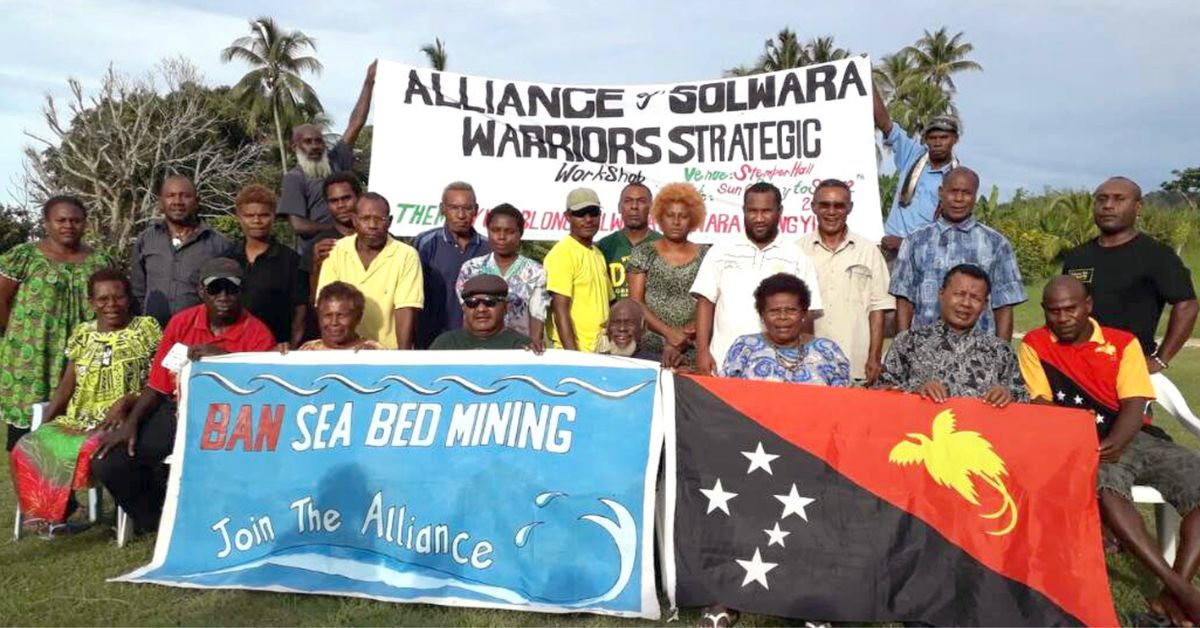 Over 1.5 million square kilometres of the Pacific Ocean is under deep sea mining exploration leasehold. Promoted by deep sea miners as an answer to the ‘green’ transition and climate action, it is poised to be the largest mining operation in history.1

The deep sea — usually defined as the realm below 200 metres — is a world of extremes. The deepest part is the Mariana Trench in the Pacific Ocean that gets to depths over 11,000 metres. Temperatures near the seabed in many places hover near 0 °C, there is next to no light, and great pressures - however life thrives here.

The deep sea contains a vast array of ecosystems that researchers have barely begun to study. Vast quantities of metal-rich mineral deposits have been found in areas of the deep sea which has catalysed companies and countries to develop technologies to exploit these mineral deposits from the deep seabed. Speculative miners have focused on three environment types to exploit for what they are calling “potential harvesting” for the ‘green’ transition:

We know very little about life in our deep seas, but what we do know is that any type of deep sea mining will have impacts in the Pacific Ocean that would be extensive, severe and last for generations, causing essentially irreversible species loss and ecosystem degradation.2

We also know that the presumed social and economic gains for Pacific economies are unsubstantiated and go against the scientific consensus; Pacific Islanders stand to lose livelihoods, food security, and cultural connections with the ocean.

The first Pacific Islanders to stand up against experimental seabed mining live in the Bismarck and Solomon Seas of Papua New Guinea. 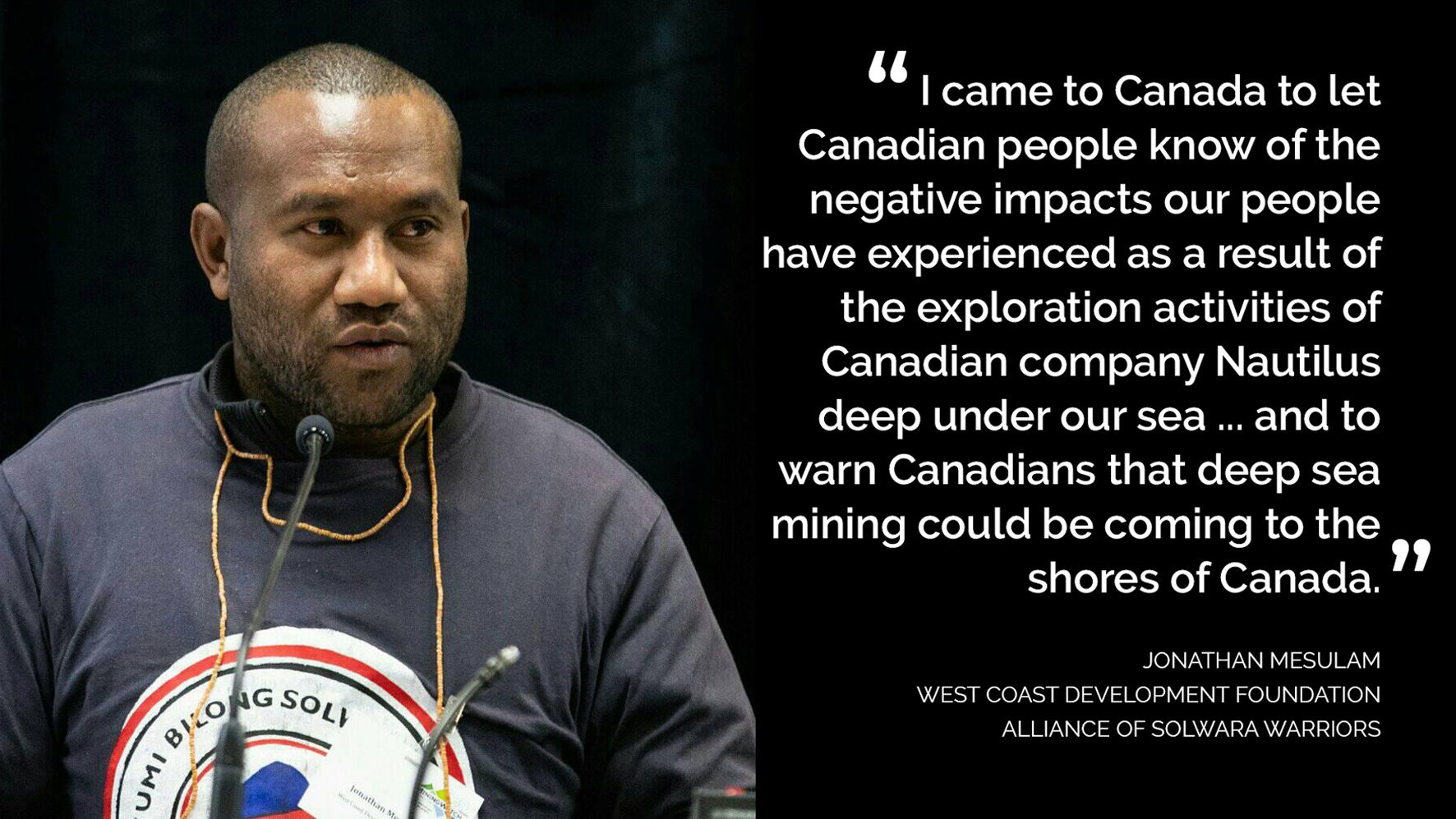 In 2008, Canadian-owned mining company Nautilus Minerals provided its ‘flawed’ Environmental Impact Assessment (EIA), to the Papua New Guinean Government.3 The deep sea-mining project, planning to mine sea-floor massive sulfides (SMS), the rich hydrothermal vents formed by plumes of hot,4 acidic, mineral-rich water on the floor of the Bismarck Sea covered an area of 0.112 km2. This is part of the mining lease which includes an area of 59 km2, 25 km off the west coast of New Ireland Province at a depth of 1,600 m. The project, projected to have a lifespan of 25 years, would have a focus on the extraction of copper, gold, silver, and zinc.

In 2012 Nautilus was granted the world’s first deep sea mining operating licence by the PNG government -5 the Solwara 1 project, situated in the traditional fishing grounds of communities from New Ireland Province, Duke of York Islands and East New Britain.

The Bismarck Sea is home to hundreds of thousands of Indigenous peoples whose lives have been dependent on the sea for thousands of years.6

In 2009 they claimed that Nautilus was ignoring the cultural and socio-economic value of their fishing grounds,7 that they had not given their free, prior and informed consent, and Nautilus had no social licence to operate.8 By 2012, community leaders alongside civil society organisations commenced a grassroots awareness program collecting 24,000 signatures opposing the project.9 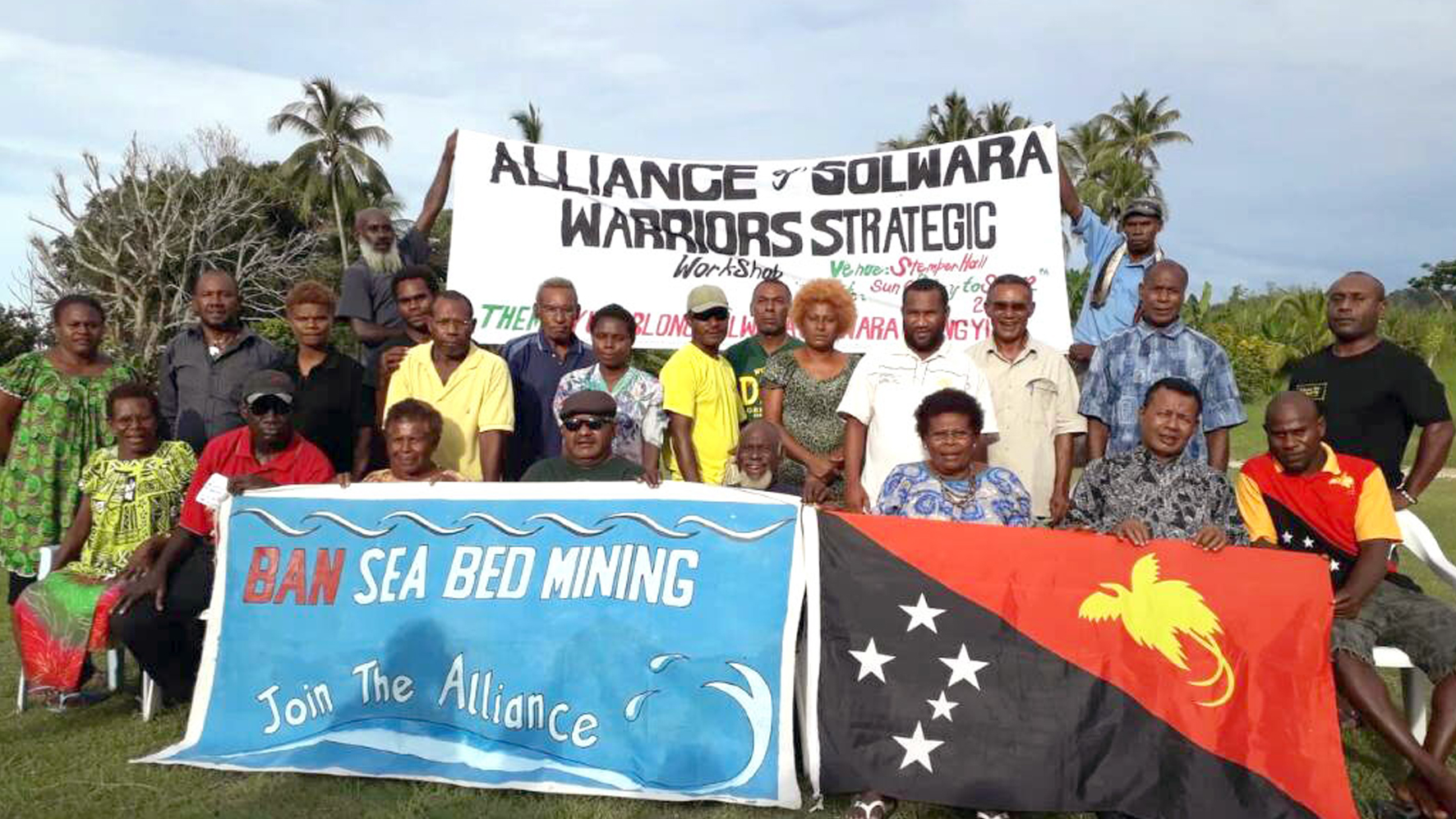 Many of these community leaders, including women and youth, engaged in education awareness, advocacy and action through cultural dance and story against deep sea mining. In early 2017 in Madang Province some of these community leaders gathered and formed the Alliance of Solwara (saltwater) Warriors which now has members in several provinces including New Ireland Province, East New Britain, West New Britain, Manus, Milne Bay, Madang and Bougainville.

In December 2017, coastal Communities launched legal proceedings against the PNG Government to obtain critical documents relating to the licensing and the environmental, health and economic impacts of the Solwara 1 deep-sea mining project.10 In early 2018 a key corporate investor AngloAmerican divested from Nautilus leaving it teetering on bankruptcy.11 Finally in 2019 the experiment eventually failed and Nautilus went into administration,12 leaving the PNG Government $USD120 million in debt.13

The demise of Nautilus and the halting of the Solwara 1 project wouldn’t have happened without the grassroot movement of the Alliance of Solwara Warriors.

However, they don’t see this as a full victory yet. They now lead the call, along with the PNG Conferences of Churches, the Centre of Environmental Law and Community Rights and civil society, for all licences in PNG to be cancelled and for a complete ban on seabed mining and have extended their collaboration across the Pacific14 and internationally.15

The Alliance of Solwara Warriors have built a powerful movement across Papua New Guinea over the past 5 years, not only against deep sea mining but on other issues that they are facing including the impacts of climate change, logging, oil palm developments and deep sea tailings disposal of mine waste into their rivers and seas. In November 2021 they were awarded the Bob Brown Foundation Community Environment Award.

Jonathan Mesulam is from New Ireland Province in Papua New Guinea. For over a decade Jonathan has been campaigning on issues relating to experimental deep sea mining, climate change and logging in New Ireland and across PNG with his organisation West Coast Development Foundation. He co-founded the Alliance of Solwara Warriors in 2017 to educate and advocate on the potential impacts of deep-sea mining on coastal communities in calling for a complete ban.

Nat Lowrey is Communications Coordinator for the Deep Sea Mining campaign (DSMC) who have been advocating and campaigning against the deep sea mining industry since 2011. Based in Naarm, Nat is passionate in the practice of allyship and collaborating with local communities and First Nations Peoples who are resisting large scale extractive developments that threaten their lands, oceans, lives and livelihoods.