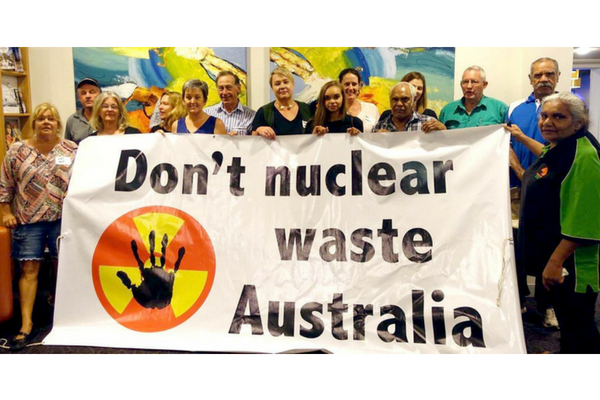 An update on nuclear debates in Australia.

Conservation groups and Tjiwarl Traditional Owners in Western Australia have vowed to continue the fight against uranium mining at Yeelirrie in the Northern Goldfields, despite the news on February 8 that their Supreme Court action to halt the mine had been unsuccessful. An appeal against the decision has been lodged.

If and when market conditions improve, Canadian mining company Cameco plans to construct a 9 km open mine pit, requiring clearing of 2,421 hectares of native vegetation and generating 36 million tonnes of mine waste that would remain radioactive for thousands of years. The mine would also threaten the extinction of multiple species of unique underground fauna.

The Conservation Council of WA and members of the Tjiwarl Native Titles group sought judicial review of the WA Government's approval of the project, which went against the advice of the state Environmental Protection Agency to reject the proposal because of unacceptable risks of microfauna species extinction. The Minister for the Environment initially upheld the position of the EPA on appeal, yet turned around and took a position to the contrary in letting the mine proceed. The court case has put a hold on the Commonwealth approval for the project which has not been granted.

Vicky Abdullah, Tjiwarl Native Title holder, said: "This is a very disappointing and sad day for our people, our land, and our future. We have fought long and hard to protect Yeelirrie and stop the uranium project. But the fight is not over ‒ this is only one part of our campaign, and we will not allow this decision to stop us now. It's a bad decision, but it's not the end decision."

Yeelirrie was approved by the former conservative Liberal Party state government. After the March 2017 state election, the incoming Labor Party government said that previously-approved mines, including Yeelirrie, could proceed but no others would be permitted.

Sites in South Australia ‒ in the Flinders Ranges and farming land near Kimba ‒ are being formally assessed by the federal government to host a national nuclear waste dump. Now, residents of Brewarrina, near Bourke in central-north NSW, are also being targeted for the nuclear dump ... by their own council. The mostly non-Aboriginal council is actively promoting the plan but has made little effort to consult the mostly Aboriginal community.

The Brewarrina Council claims broad community support on the basis of a questionnaire which described the facility as a 'medical and industrial waste facility' and did not mention the words radioactive or nuclear!

Brewarrina residents visited Sydney from March 23‒25 for a protest rally and for meetings with trade union representatives, the NSW ALP, the NSW Greens and the Nature Conservation Council. The campaign is being supported by Friends of the Earth, the Australian Students Environment Network, the Australian Conservation Foundation and the Beyond Nuclear Initiative.

Brewarrina is famous for the fish traps, the oldest man-made structures on earth. The traps are elaborate networks of rock weirs and pools built to catch fish swimming upstream.

Standing Strong is a new book (and e-book) celebrating the victory of South Australians in their 2015‒17 campaign to stop an international high-level nuclear waste dump being built in the state. The book is online at www.tinyurl.com/no-sa-dump and www.nodumpalliance.org.au/standing_strong

Published by the No Dump Alliance (NDA), Standing Strong covers the key issues championed by Aboriginal and civil society groups opposed to the plan including the lack of Traditional Owner consent, dubious economics, the risks to people and the environment and the impact on future generations.

"This book documents how our community said no to the threat of radioactive waste," said Yankunytjatjara woman and NDA spokesperson Karina Lester. "We know nuclear is not the answer for our lands and people, we have always said no. It is important that all politicians get the clear message that nuclear waste and nuclear risk is not wanted in SA."

South Australians are still battling a plan by the federal government to establish a national nuclear waste dump in the state.

Mirarr Traditional Owners in the Northern Territory and their many supporters are this year celebrating and commemorating the 20th anniversary of the mass movement that eventually defeated Energy Resources of Australia's plan to mine the Jabiluka uranium deposit. Hundreds of thousands of Australians took to the streets, thousands made the long trek to the Jabiluka blockade (which lasted for eight months), and hundreds were arrested at the mine-site including Mirarr Senior Traditional Owner Yvonne Margarula.

The first of a number of initiatives to mark the 20th anniversary is a 'Standing Strong' calendar featuring powerful and beautiful images to commemorate the historic victory. It includes pictures from Mirarr country as well as from Jabiluka actions and support rallies across Australia and around the world.

The Standing Strong calendar is online.

A new report was launched by the Nobel Peace Prize-winning International Campaign to Abolish Nuclear Weapons (ICAN) and PAX in March, detailing the financing of the nuclear weapons industry worldwide.

Don't Bank on the Bomb 2018 profiles the 20 companies that are most heavily involved in the production of nuclear weapons. Since 2014, US$525 billion has been made available to these companies by more than 300 investors.

At the United Nations last July, 122 countries negotiated and adopted the Treaty on the Prohibition of Nuclear Weapons. This Treaty is on the path to entry into force, becoming binding international law. The Treaty prohibits the financing of nuclear weapons under the Article 1(e) prohibition on assisting, encouraging or inducing anyone to engage in the development, production or manufacture of nuclear weapons.

Since the Treaty's adoption, two of the five largest pension funds worldwide are taking action to avoid investing in nuclear weapons; Dutch fund ABP and Norwegian Government Pension Fund. They will ensure their combined assets of US$1537 billion will not be available to nuclear weapons producers.

Two superannuation funds have made it into the report's "Hall of Fame" for banning nuclear weapons investments. Future Super and Australian Ethical Superannuation have published policies committing not to invest in companies involved in the production of nuclear arms.

"Nine countries are investing billions in maintaining and upgrading weapons that are now banned by the UN Treaty on the Prohibition of Nuclear Weapons. Financial institutions must now dry up the resources available to producers of these weapons of mass destruction." said Gem Romuld, Australian Director of ICAN.

"Our government has not yet joined the nuclear ban treaty, signifying its support for these weapons. The public can reject the industry that fuels WMDs by demanding your bank and super fund divest from nuclear weapons producers. If they don't, then choose a bank that prioritises nuclear disarmament, over nuclear war."

Last year, the Aboriginal-led Australian Nuclear Free Alliance (ANFA) celebrated its 20th birthday. ANFA has fought countless nuclear battle over the past two decades, many of them successfully.