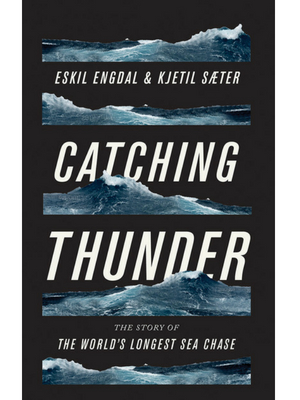 Catching Thunder brings to life the treacherous voyage led by Captain Peter Hammarstedt of the Sea Shepherd ship Bob Barker as he and his crew relentlessly pursue the Thunder for what will become the longest chase in maritime history.

Written by two award-winning investigative journalists, the book is the product of over three years of research across 12 countries and five continents and reveals the true criminals behind the illegal fishing of Patagonian Toothfish (known as "white gold") in Antarctic waters.

The authors follow this incredible expedition from its very beginning. Yet even as seasoned journalists, they cannot anticipate what the chase will uncover, as the wake of the Thunder leads them to the trail of criminal kingpins, rampant corruption, modern slavery, and an international community content to turn a blind eye. Soon, catching Thunder becomes not only a chase but a pursuit of the truth itself and a symbolic race to preserve the well-being of our planet.

The authors view illegal fishing as serious organised criminal activity and a failure of international governments to proportionally punish offenders.