The significance of climate forces migration for pacific culture and spirituality 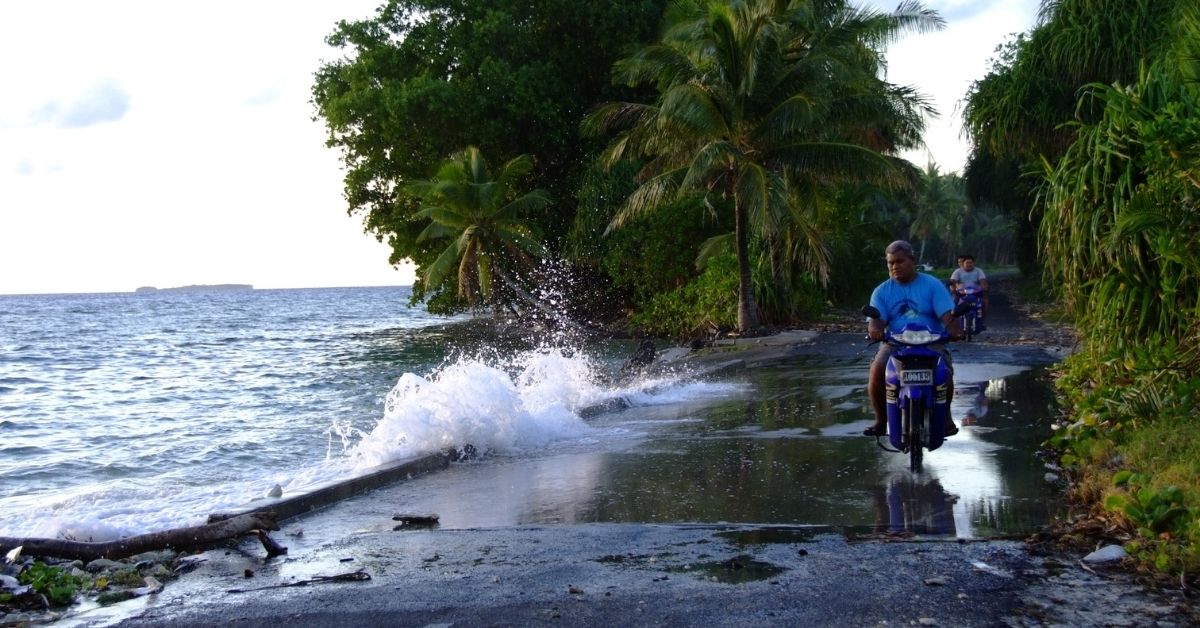 On behalf of Climate Frontlines of Friends of the Earth Australia AND the Pacific Islands Council of Qld’s (PICQ) Climate Change Network, may I first thank our Friends in Friends of the Earth Japan for the opportunity to be here today to talk on something so importantly close to my heart and the heart of the Pacific. Arigato Ayumi!!

As you can imagine with COP26 on the horizon, many of our Pacific Communities and agencies have been gathering/meeting to prepare for this event in Glasgow. Those of us in FoE Climate Frontlines and the PICQ acknowledge the many, many organisations and agencies in Australia and the Pacific promoting awareness around the Pacific’s agenda on climate change and the vulnerabilities of our peoples.  In the midst of the dialogue, we decided to highlight or place a spotlight on the Impact of Climate Change Challenges on the Cultural Identity and Sovereignty of our Pacific Atoll Nations. In our series of webinars on this topic, the main focus nations were Kiribati, Tuvalu and the Marshall Islands, that is, nations sitting on the edge of the climate frontline.

In the webinars we were fortunate to hear the voices of political representatives, community leaders, regional climate activists and academics, all contributing to a picture of the impacts of climate change and how people are responding.  It is mainly from these forums that I want to share information related to impacts on Culture and Spirituality of our Pasifika Peoples brought on by climate change and possible forced migration.

For all Indigenous Peoples of the world, land, and the entire ecosystem – sea, sky, plants, animals, ocean, sea creatures, fresh water – is part of our identity.  Pacific Islanders are no different.

We are our lands and seas as they are us and who we are.

Our cultures, traditions, languages, physical and mental health, place, related wisdom, relationships in our families and communities and spiritual wellbeing, are all integrated in that environment, and central to our identity and existence.

So, take away our land and the parts of the ocean from which we come, and the loss becomes enormous, especially when our values and beliefs are tied to the land from which we, our ancestors and pioneers came from, found, fought and cared for, for generations. Time and again in our Pacific stories on climate change you will hear that our connection to the places of our birth are strong and that having a place to identify with demands that we commit to its protection.

Loss of our Pacific lands and island homes to climate change is of no significance to the powerful and dominant nations of the world who influence the climate change conversation.  We believe that this is because they themselves have become so disconnected and far removed from the environment and natural world that their understanding of our situation is restricted to their own worldviews, based only on the market economy and wealth creation, regardless of the impact on others of our world. They have no understanding of how our cultures, languages, traditional ways of life and livelihoods identify us with our lands, oceans and all of nature.

We need to be heard and understood as Pacific Peoples through all the platforms and opportunities available to us so that the rest of the world can develop a deep understanding of what our story on climate change is. We are no longer colonies of some distant nation that speaks patronisingly or benignly on our behalf!

We have a Voice as Pacific Peoples who know our island homes and are experts in our own lives!!

Our perspective as Pacific Peoples needs to be integral to every conversation that affects us. We and our leaders recognise that for us in the Blue Pacific, climate change is the single greatest threat facing our region. It is no longer an issue of politics but one of survival!

Our myths, legends and stories of Creation also hold prominent places in our cultures as some are related to our histories of navigation and journeying, as well as our roles as guardians of nature and our environment. These are our Peoples’ stories that give us identity and explain the origins of specific cultural practices and why they must be observed – there is always sound reasoning on which the wisdom is based. Landmarks carry stories and, in some cases, house our spirits. How can we leave?

Of course, Pacific cultures are not static, and individuals have been impacted by outside forces.  According to Maina Talia from Tuvalu, one outcome has been a challenge to the concept of community, which traditionally involved voluntary work by community members for the common good. (This include)… sharing instead of buying and selling in a market economy, i.e. sharing fish catches and garden food, excess clothes, building of new homes etc. Not only have environmental changes affected Pasifika People but the raised awareness around human rights and the concept of individualism it brings can run counter to the communal approach to traditional life, wherein voluntary communal work and concepts of sharing have been impacted.  There needs to be more attention given to communal rights to address the challenges of climate change.

Gardening and cultural activities conducted around clearly defined seasons have been disrupted as seasonal rain is now unpredictable.  The season for the running of a specific type of fish, signified by the flowering of a particular tree or plant, cannot be relied on. Once clean water which previously enabled us to drink, cook our food, wash our clothes and clean our houses has now been compromised with the invasion of sea water making it unusable.  Our traditional fishing grounds have become empty of fish as fish stocks have migrated to deeper seas and new breeding grounds.  The loss of arable land due to rising sea levels has meant a normal and natural subsistence way of life has been severely eroded.

In such a setting, the western view would be, “it’s just land” but for our Pasifika Peoples the loss of their island homes, the bedrock of their cultures and spirituality will be profound and force migration as a consequence of climate change (will be) …a huge challenge. But for many of our People and especially our Atoll Nations, migration is premature.

Migration – whether internal, regional, or further afield – is a last resort and an option if all else has failed.

Before reaching that point our People of the Pacific are still fighting. There needs however to be attention paid to Pasifika Peoples who may CHOOSE to migrate, and their wishes too need to be respected through measures that allow them to celebrate and maintain their cultural identity and honour their hope to return to their island homes if climate change impacts are reduced.

Regardless of whether migration is internal within a nation, to another Pacific Nation or beyond the region, notable impacts will still be felt. Receiving communities’ land ownership, fishing and hunting grounds, kinship ties, cultures, traditions and customs will be affected. Migrating communities stand to lose their identities over time as Elders and recognised keepers of the lore, history, ancestral and origin stories etc, pass and continuity of cultural practices, values and beliefs are in jeopardy. Migration internally or to other Pacific Island nations appears to be a better option than migration to a totally different culture unrelated to the Pacific.

There are still strategies offering protective or mitigative actions that can slow down or positively change the climate migration option.

I’d like to end by encouraging members of Friends of the Earth Japan and our listening audience to take what I have shared with you today as a serious plea for you, your friends and various networks; to pay attention and support our efforts to raise the awareness of the global community around the impact of climate change on our Pacific Peoples. We are the smallest contributors to the world’s greenhouse gas emissions yet we are the People who stand to lose our homes if the madness does not stop.

Stella met Ayumi Fukakusa from FoE Japan when she joined the FoE International team at COP23 in Bonn, Germany.  In September 2021 Ayumi invited Stella to make an online presentation at an event FoE Japan held in preparation for COP26.