There is no climate justice without LGBTIQA+ liberation

This article was written for Chain Reaction magazine by queer, enviro and social justice activists, Zianna Fuad (they/them) and Phil Evans (he/him or they/them), who are part of the Friends of the Earth community. 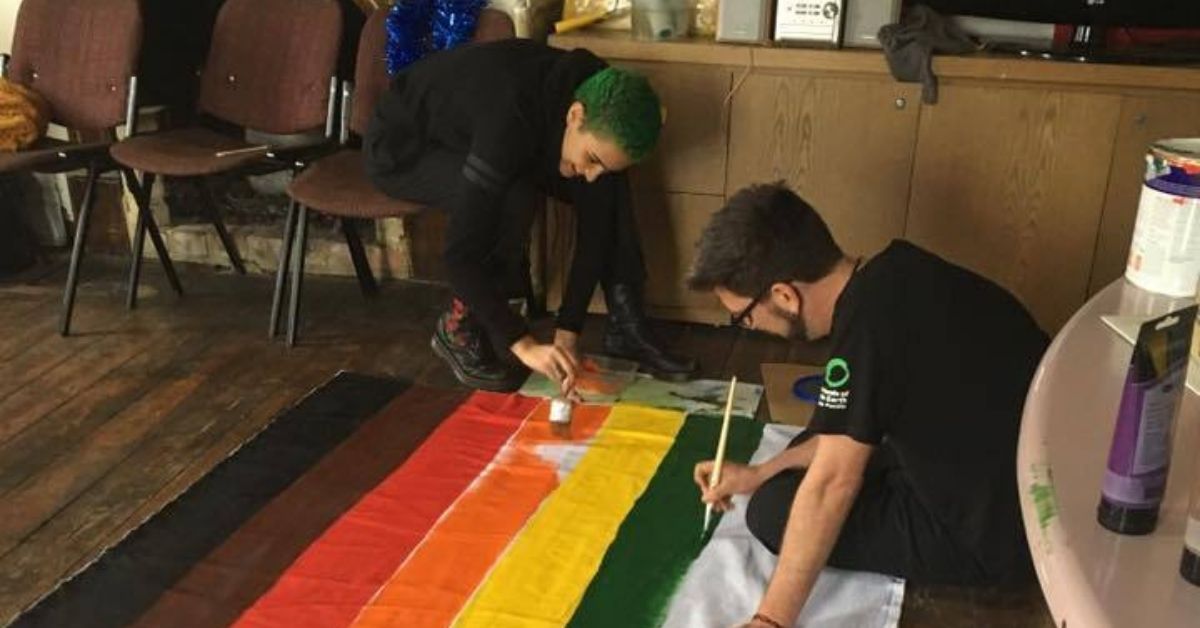 The green on the rainbow flag was originally there to represent nature and the environment. When Gilbert Baker - an American artist - originally designed the flag at the request of Harvey Milk back in 1978 each of the colours were symbolic: hot pink for sex, red for life, orange for healing, yellow for sunlight, turquoise for magic/art, indigo for harmony, and violet for spirit. That flag has evolved over time to better represent our diverse community, including making more visible the struggle of First Nations and people of colour. And that is a good thing. The climate movement needs to do the same, and work already is underway by First Nations and people of colour activists, and by groups like Original Power, Seed Mob, Democracy in Colour, and others in the space - but there is much more to do.

The idea of climate justice has become almost ubiquitous with any protest or action that promotes action on climate change.

But climate justice is more than a hashtag - it is a praxis.

It is a way of operating, and point of view that informs all aspects of activist work. Does simply using a hashtag really do justice to people of colour working to dismantle systemic racism? Does simply including a slogan on a banner work to dismantle patriarchy and other interlinked forms of oppression?

The same colonising forces that have dispossessed lands here and abroad, and promoted extractivism at all costs are the same forces that spread homophobic and transphobic laws and attitudes around the globe. Anti-capitalism has long been important to many in the fight for LGBTIQA+ liberation. It is recognised that capitalism rewards conformity and abhors diversity. Capitalism and colonialism can thus be seen as  twin threats to diversity in gender and sexuality in a similar way that it threatens country and culture in its quest for profit.

Building safer space for LGBTIQA+ people involves dismantling all the oppressions that are maintained by patriarchal power structures.

The Intergovernmental Panel on Climate Change has repeatedly stated that marginalised people will bear the brunt of climate impacts. People who are part of the LGBTIQA+ community are more likely to experience financial hardship or homelessness. Increasing extreme weather events will be felt hard by those with less economic security.

According to LGBTIQ+ Health Australia, 22% of LGBTIQA+ people aged 18 and over reported having experienced homelessness. Trans and gender diverse people reported higher rates of ever experiencing homelessness: 34% of trans-men, 33.8% of non-binary participants and 31.9% of trans-women. This economic situation is one the reasons that LGBTIQA+ people are on the frontline of climate impacts.

Every flood, fire, heatwave, storm, or other extreme weather event - that is only increasing with climate change - agricultural systems and food prices are impacted, people sleeping rough are hit hard, and often any assistance packages set out require stable addresses or access to government portals. Sometimes those same government and charity systems that provide assistance exclude people and their identity, and can be traumatic to deal with.

Societal circumstances make us resilient and survivors - this makes us good organisers and activists. Building community spaces that welcome us, make us feel safe, not only will help drag down the horrific mental health, and suicide crisis in our community, but enrich change making communities with creative, vibrant activists who are well equipped to understand intersectional struggles - and this is fundamental for real action for climate justice.

Educate yourself about LGBTIQA+ struggles and share knowledge and resources.

There is a rich history in the struggles we have faced, and many lessons to learn about what strategies and tactics have been used. It is also helpful to understand current struggles or threats to people’s rights. It’s respectful to not rely on LGBTIQA+ people in your life to educate you, rather you can find great sources written by LGBTQIA+ people sharing their experiences and politics online.

Everyone must play an active role in creating safer spaces, especially if you’re cis and straight and have benefitted from freedom in these systems. Be a better ally by calling-out negative or uninformed comments about the LGBTIQA+ community and explain that you find them offensive. Then if you feel comfortable, call-in the person by sharing some resources that could be explored more deeply.

Never assume identity - invite people to share if they feel safe to do so.

When organising in spaces (digital and real world), don’t assume people’s gender identity with pronouns - invite people to let people know their pronouns, if they feel safe to, in any introductions. Lead by example - even if you are cis-gendered. This goes for sexuality too. If you make a mistake, correct yourself and move on.

Use inclusive language - in meetings, and in your campaigning, and organising materials.

Look at any documents or policies you have and remove any gender binary references - like he/she - so people feel included when entering and learning about a space.  Avoid using heteronormative terms or analysis, like “mum and dad investors”, or ordinary families, that often invoke a heteronormative image.

Organisers need to stop pushing people who ‘don’t look straight enough’, or different, to the back of photos, or out of public facing roles. No more “fezzas to the back” or just cis-gendered (often cis-male) spokes people. Aesthetic freedom is often vital for people’s gender expression and safety - be proud of your crew’s diversity.

Turn up and be good comrades.

It was awesome to see so many environmental groups turn up for marriage equality. But, just as only stopping coal will not end the climate crisis, marriage equality was not the fait accompli of LGBTIQA+ liberation. Both the struggles continue, and they are inextricably linked. Always look for new ways to listen, show up and act in solidarity with your LGBTQIA+ comrades!