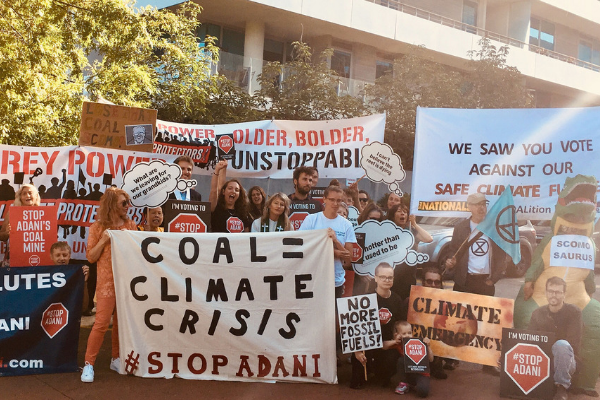 The Federal Coalition’s last-ditch attempt to hit the reset button on climate change has been a flop with several dozen community members appearing at a snap rally at the Prime Minister’s press conference in Melbourne this morning.

“The Coalition has failed to review the science and adopt measures that are commensurate with the scale and urgency of the climate crisis,” said Leigh Ewbank, FoE climate spokesperson.

“An Emissions Reduction Fund that fails to keep coal, oil, and gas in the ground is a hoax.”

Friends of the Earth says the Coalition’s record of undermining action on climate change is not easily forgotten by the community.

“If the Coalition wants to be taken seriously on climate change it would apologise to the Australian people for actively undermining action since it formed government in 2013,” said Leigh Ewbank.

“Scrapping the price on pollution and slashing the Renewable Energy Target are still fresh in people’s mind.”

“PM Scott Morrison and Treasurer Josh Frydenberg brandishing a lump of coal on the floor of the Parliament is not easily forgotten.”

Friends of the Earth says investing in climate solutions makes sense only once governments have a grip on the climate science and have set bold and ambitious targets with policies to achieve them.

“The federal government should be looking to states like Victoria where the policy architecture is in place,” said Leigh Ewbank.

At the weekend, Victoria celebrated the second anniversary of the state’s Climate Change Act which legislates a target of zero-net emissions by 2050 and establishes a process for accounting for the latest science and setting interim emissions targets every five years.