COP 26: ‘Rich nations have kicked the can down the road’

The Conference of Parties (COP) climate negotiations in Glasgow has just ended. Climate science makes it clear that we are running out of time to avoid climate catastrophe and this COP was vital in terms of achieving global agreement to act to limit overall climate heating.

Sadly, it didn't deliver what was needed.

Here is a very quick response from Friends of the Earth.

It's been an emotional roller coaster: normally leaders appear in the second week of negotiations, but this time, sensing the urgency, many leaders were on stage in the first few days, making a series of pledges, including:

After huge community pressure, the PM finally caved to public opinion and announced a commitment to net zero emissions by 2050 shortly before the COP.

At this COP, countries were expected to announce their emission targets for 2030. While it is widely agreed that emissions must plummet this decade if we are to even have a chance of staying close to the agreed goal of holding overall warming between 1.5°C and 2°C, Australia failed from the first day by refusing to promise more ambition than the paltry targets for 2030 announced years ago by Tony Abbott while he was PM (26-28 percent below 2005 levels). Nations with similar economies went much further – for instance the USA committed to 50-52 percent below 2005 levels by 2030, while the UK promised 68 percent below 1990 levels. 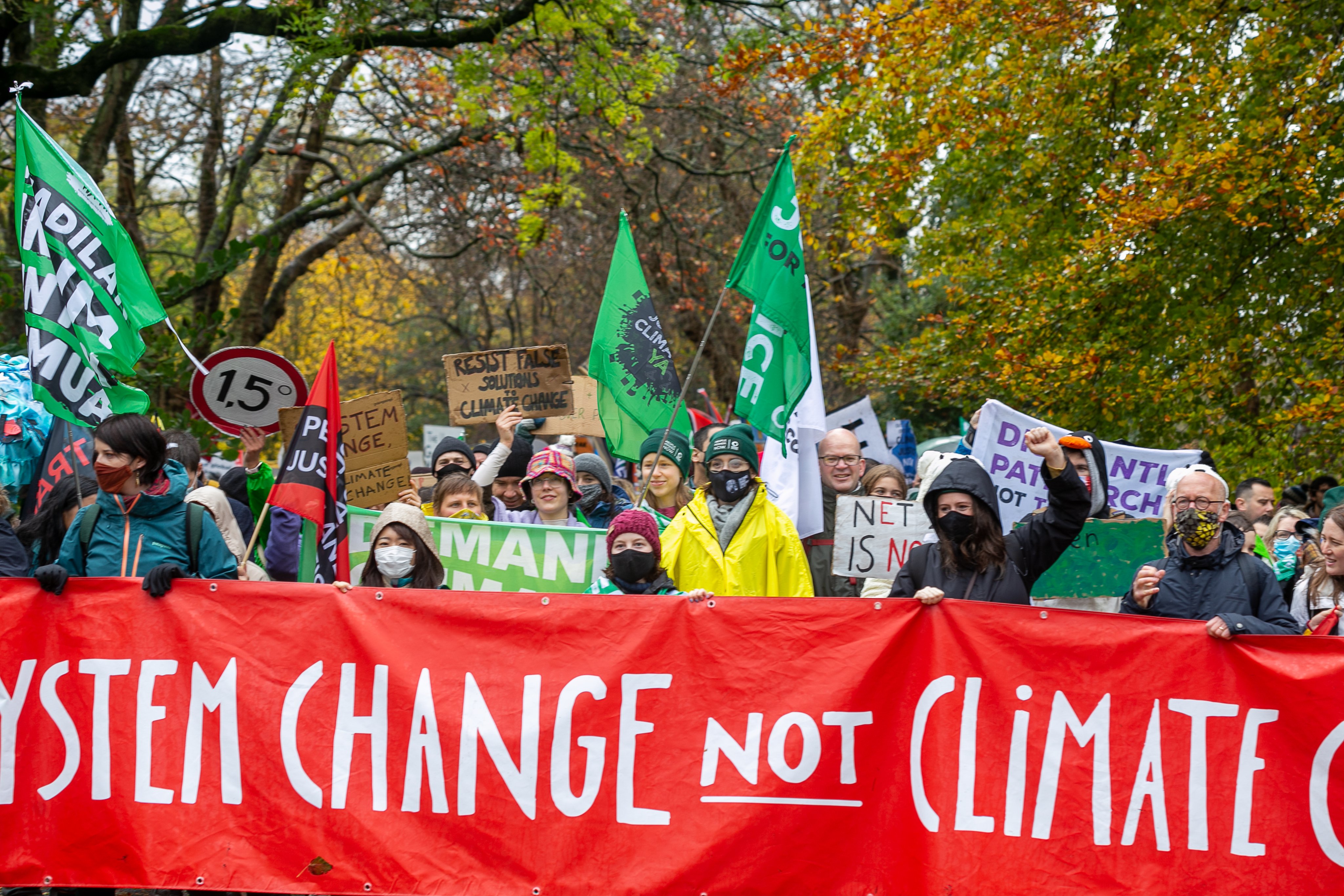 Instead, Australia offered a plan to achieve net zero through "technology not taxes," using the catchphrase "The Australian Way," with a lot of vague claims and promises that we would rely on technology that doesn’t even work yet. When the government finally released its modelling showing how it had developed its plan, it was clear that it included no new policies, and instead relied on voluntary actions and government backing of technology to cut emissions. In response, Tim Baxter, a senior researcher at the Climate Council, said the report "may as well have been written in crayon" for it's lack of substance.

Then the leaders mostly went home. Big emitters like China and Russia were criticised for not even showing up, and large oil producers like Saudi Arabia were accused of seeking to sabotage the talks. The presence of a huge number of fossil fuel company reps and difficulties of many civil society representatives in gaining access to negotiations highlighted the difficulty of getting this global meeting to agree to targets based on the best available science.

A pleasing development was the announcement of the Beyond Oil and Gas Alliance, an initiative founded by Denmark and Costa Rica, which is aimed at phasing out oil and gas production. While countries like France, Greenland, Ireland, Sweden and New Zealand joined the alliance, Australia did not.

The second week of the talks were dominated by discussion about financing – the 'loss and damage' caused by the over consumption of resources by rich (Northern nations) like Australia. One of the heartening developments was the Just Energy Transition announcement which will see South Africa supported to transition away from its current reliance on coal. However, Southern nations have strongly criticised the lack of serious commitment to deal with Loss and Damage. In its final form, the pact does not hold wealthy countries to specific financial commitments to help Southern countries. 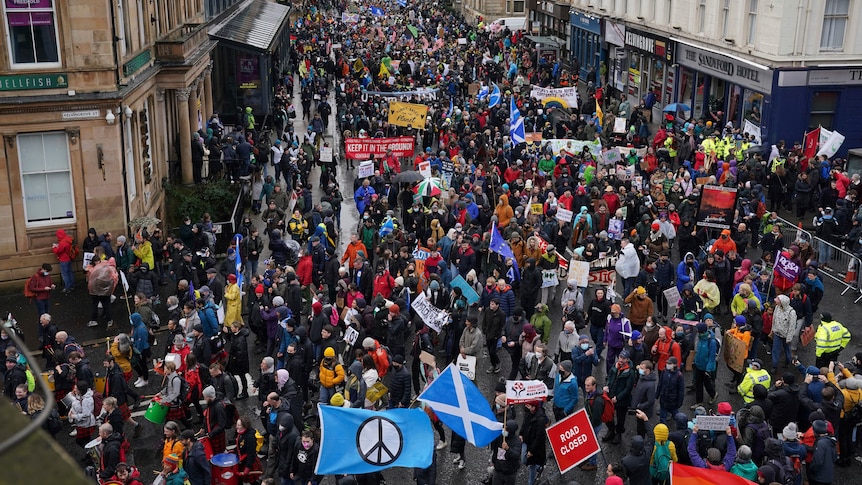 The U.S. and China's surprise agreement on cutting carbon emissions was a last minute boost to the talks.

Sadly, the summit has closed with members failing to agree on a call to "phase-out" coal use, after a last-minute intervention by India which succeeded in watering down the language to "phase down." Commitments made at the conference failed to set the world on a path to reducing emissions by 45 percent by 2030 in order to stabilise the climate close to 1.5°C, but did close the gap to that trajectory. In the final hours of the talks, in a powerful show of unity, civil society delegates then walked out of the COP venue, to join with hundreds of activists from the movements that have been organising together on the outside.

The so-called Glasgow Climate Pact calls upon nations to phase out "inefficient fossil fuel subsidies" and recognises the need for "a just transition" from fossil fuels. This sets a direction for our campaigning in coming months.

Friends of the Earth International has had a large team at the talks. FoEI described the failure of the meeting as scandalous and said "the outcome of COP26 leaves developed countries free to keep polluting whilst giving the green light for massive land grabs for offsets in developing countries."

"Just saying the words 1.5 degrees is meaningless if there is nothing in the agreement to deliver it."

Check this story from The Guardian, which includes responses from a range of civil society groups.

1/ Forum: COPping Out on Climate Action 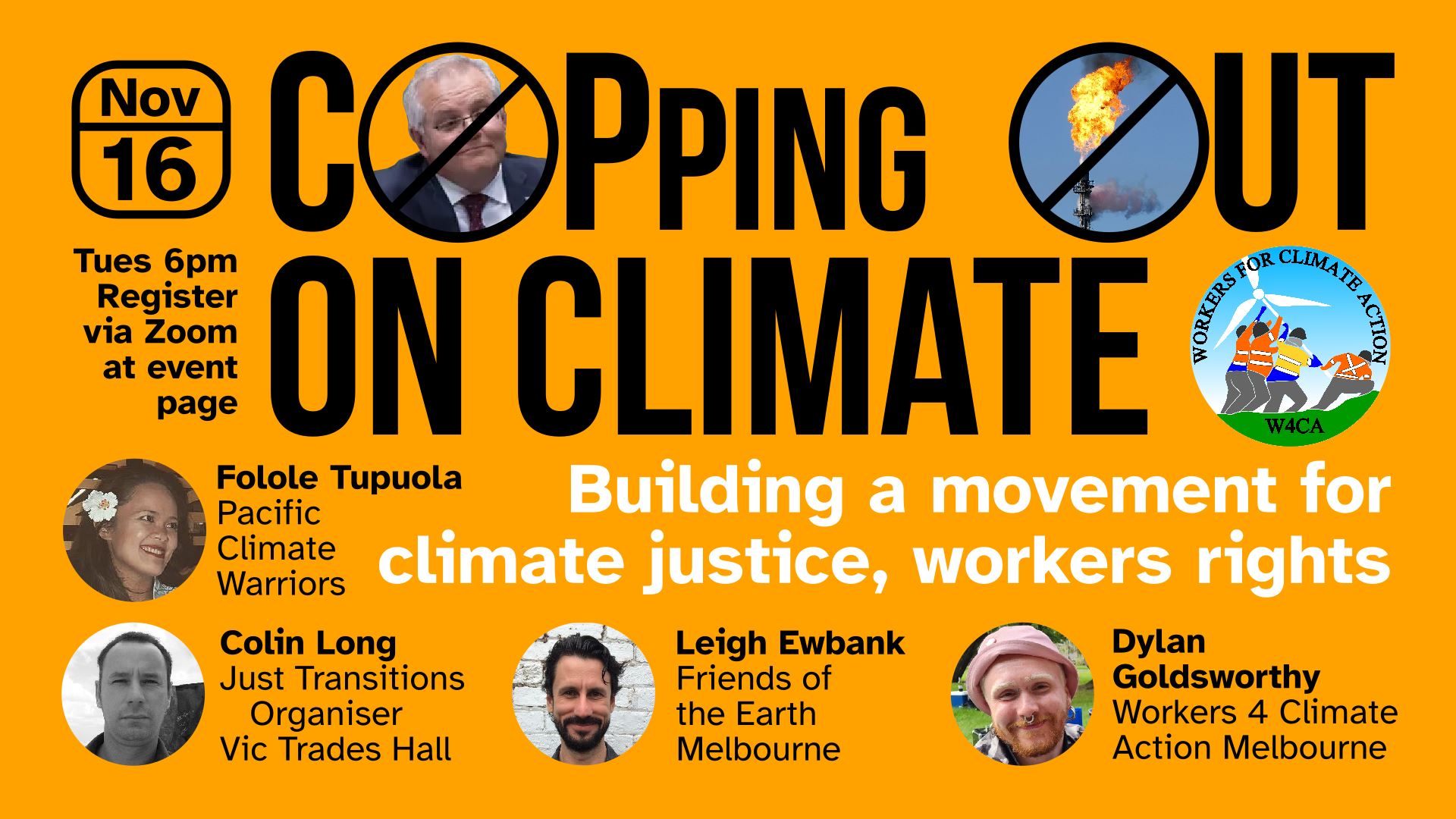 We will be joining Workers for Climate Action to consider how we can organise together to oppose new fossil fuel projects, force our governments to build public renewables, and ensure that the transition creates good union jobs for all.

Tuesday 16 November at 6pm by zoom. All welcome.

2/ Build pressure on the federal government

We now have good reason to increase pressure on the federal government. The Glasgow pact speeds up the so-called "ratchet mechanism" of the Paris Agreement by calling on countries like Australia that have not increased their 2030 targets to do so as soon as possible before next November's summit in Egypt.

That must be a key focus of our work over the coming year. We will update you on this in coming weeks.

3/ Action is always the antidote to despair

As we prepare for post COP climate campaigning, there is lots to do:

Tackling the climate crisis in a socially just way means putting workers’ rights at the core of solutions.

On October 27, Friends of the Earth came together with comrades from the union movement for the launch of the Climate Impacts @ Work Survey: a new project coordinated by FoE with six Victorian unions and RMIT university. The project will conduct pioneering research into the ways that workers in a diversity of industries are already experiencing climate impacts on the ground in their workplaces, and ask them about the responses they want to see from governments and employers. If you’re a union member, keep an eye out for the survey in coming weeks.

Contact project coordinator Anna Langford at [email protected] if you’d like to be more actively involved or to find out more. 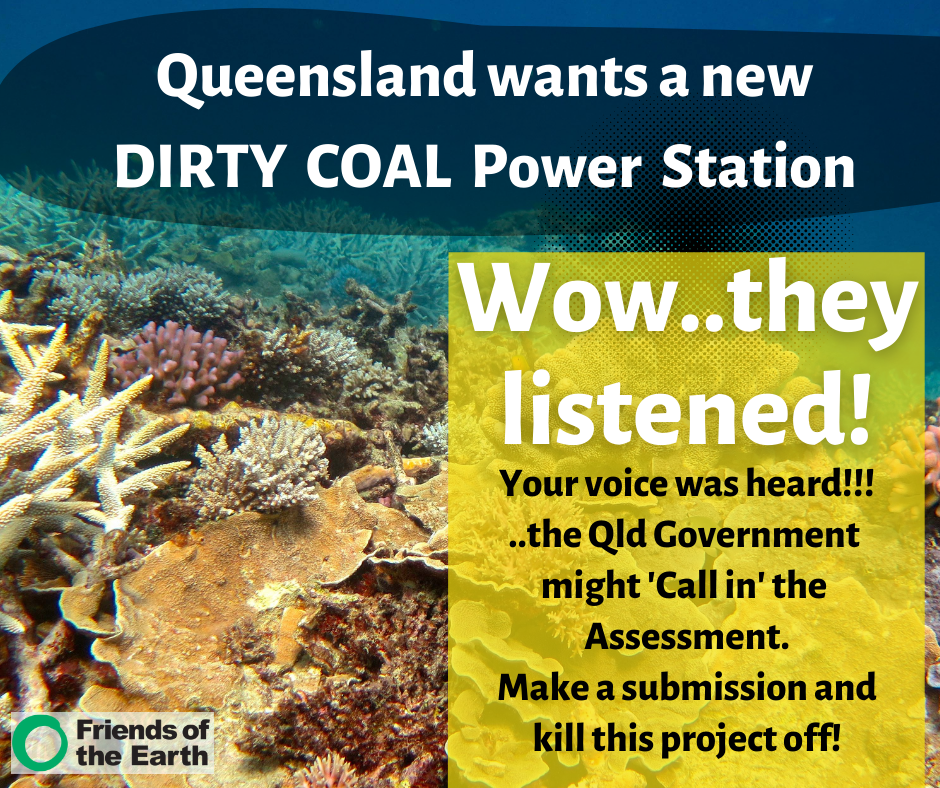 Billionaire Clive Palmer wants to build a dirty new coal power station in Queensland. After a huge community response, the Queensland government has now announced it will 'call in' the project, which gives us all a chance to comment.

Say No to Nukes

In the lead up to COP26, the nuclear industry, with the help of the Murdoch media, has actively been spreading propaganda and misinformation about nuclear energy as a 'green' solution to combat the climate crisis. The pro-nuclear lobby has been very active at COP26 and we are expecting this to fuel the propaganda in Australia even more after the summit finishes.

We will be organising a range of actions post COP26. We need people to help us with letter writing to politicians and media platforms, spreading the facts on social media and join us at protests. Please sign up to our mailing list to hear how and when you can help out.

If you are part of an organisation, please sign the International 'COP26 civil society statement' to demand an urgent global shift from reliance on fossil fuels and nuclear to renewable energy: dont-nuke-the-climate.org/cop-26-statement.

"The 150,000 people out on the streets for climate justice in Glasgow know the solutions to the climate crisis: a just transition to a world without fossil fuels and climate finance flowing from developed to developing countries."

"No matter how bad the outcome, without activists being here lobbying, marching, disrupting their COP & targeting their spin this outcome would have been much much worse."

"Despite this, we leave COP26 with real hope in our hearts, because it's also clear that people all over the world are rising up to demand climate justice in greater strength and unity than ever before."

There is no 'Planet B.' In coming months we will be working harder than ever to achieve meaningful outcomes for people and planet.

Thanks for your efforts and your support.