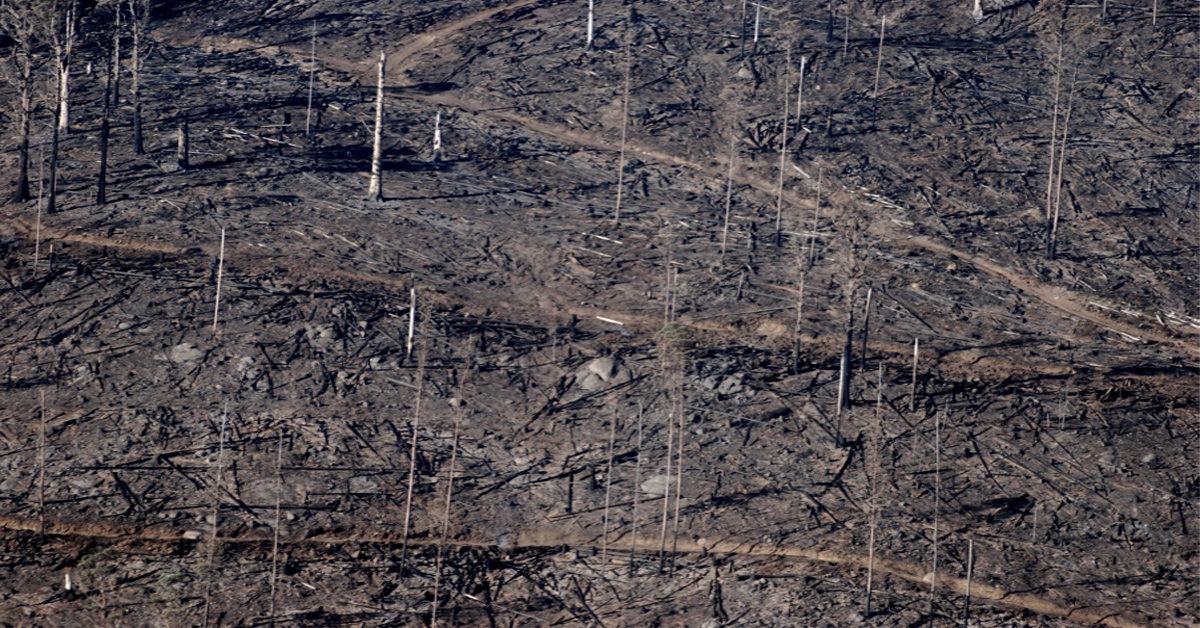 Friends of the Earth Melbourne, has a long history of monitoring plantation operations in Victoria, particularly in the Strzelecki Ranges and Central Gippsland regions. This history, going back 25 years, grants FoE a unique perspective and insight into understanding the plantation industry. This “new” strategy is the third plantation expansion strategy that has occurred in Victoria since the mid 1990’s and the second for Gippsland. The previous Gippsland strategy in the mid 2000’s failed dramatically. Have lessons been learnt? It would appear not.

The Andrews Government has copped a mountain of criticism from the media, academics and green groups over the clearly unsustainable logging of native forests, particularly in the Central Highlands, where logging has intensified since the disastrous fires of 2009. The problems have been decades in the making and the finger should be pointed at successive Victorian Government’s who have allowed the problem to continue to fester. Barely a week goes by where the issue is not highlighted in the media. A number of ground breaking legal cases and boycotts have also placed pressure on the State logging agency, VicForests, particularly in relation to logging Leadbeater's Possum habitat.

The elephant in the room however, in dealing with native forest logging in Victoria, remains the Maryvale Pulp Mill. Much of the mill's legislated concession zone is in the Central Highlands. The mill, located 7km north east of Morwell, in the Latrobe Valley, is the largest in Australia. ~90% of investment in the entire Australian pulp and paper industry is tied up in Maryvale. The mill was purchased by Japanese company Nippon Paper in 2009. It produces 600,000 tonnes of paper a year under the Opal brand name and employees 1000 workers. It is the largest private sector employer in Gippsland and is clearly the main “jewel in the crown” of the Australian paper industry. It has been the bane of environmentalists for decades, with green groups as early as the 1991-2 claiming that there was enough plantations for the entire industry, including Maryvale to move entirely into plantations.

When Premier Andrews recently went public with the plan to shut down native forest logging by 2030, he announced at Maryvale that 50,000 ha of new plantations would be needed by 2030. Clearly then, the new plantation strategy is aimed directly as dealing with the Maryvale issue.

Maryvale gets its raw material from a number of sources. Native forests, pine plantations, eucalypt plantations and recycled paper sources. Exact figures are difficult to locate, but FoE estimates that the mill would consume about 1.8 million cubic metres of woodchips per year. Of this, between 850,000 to 900,000m3/yr would be plantation pine grown in Gippsland, approximately 300,000m3/yr “plantation hardwood” (sourced mainly from the Strzelecki Ranges), with approximately 600,000m3/yr* sourced from native forests. (*Many people assume that Maryvale only receive 350,000m3/yr of woodchips, which was guaranteed under the Wood Pulp Agreement Act 1996. However, this amount was increased by around 200,000m3/yr in around 2005 for an expansion carried out at Maryvale. The mill also receives woodchips from sawmills, pushing the exact native forest volume closer to 650,000m3/yr). The Wood Pulp Agreement Act also ends in 2030, the same year that the plantation strategy will take effect. 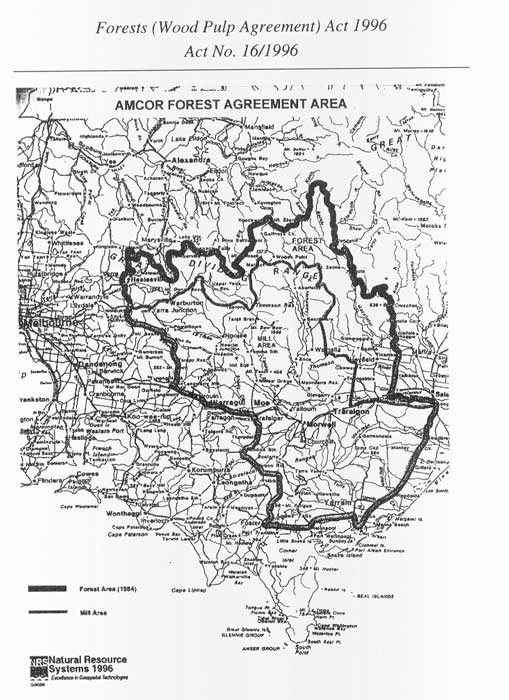 The additional 200,000m3/yr of native forest guaranteed to Maryvale in 2005 was supposed to be gradually met by growing new plantations. FoE watched this expansion carefully.  It was planned that 2000ha of bluegum plantations would be established in Gippsland, mainly near Stratford per year, for a decade. The 20,000ha of new bluegums would then be logged indefinitely (2000ha/yr) providing plantation fibre to Maryvale. But then reality hit. FoE estimates that instead of 20,000ha of new hardwood plantations grown in Gippsland between 2006-16, only 7000ha (35% of what was promised) were planted with the last being planted in 2009 just before plantation based Managed Investment Schemes collapsed. Almost all of these new plantations have now been logged with many being replanted with pine or converted back to farmland. The 200,000m3/yr of native forest fibre, therefore was not a short term increase, but rather an indefinite increase with no end date. The new Gippsland plantation experiment failed. 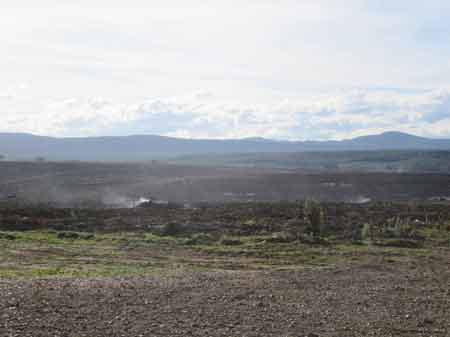 2017 May: Providence Ponds Catchment/Perry River Catchment. Recently clearfelled bluegum plantations. Replanted back to pine soon after this photo was taken.

In addition, to replace the amount of native forest timber guaranteed under the 1996 Wood Pulp Agreement,(350,000m3/yr), it would require the planting of approximately 35,000ha of new hardwood plantations. With 20,000ha of promised plantations required to meet the needs of the 2005 expansion, that would mean that for Maryvale to become plantation driven, 55,000ha of new hardwood plantations would need to be established by 2030. Planting rates would have to reach about 5500ha/year to meet the promise of Dan Andrews to phase out all native forest logging by 2030. 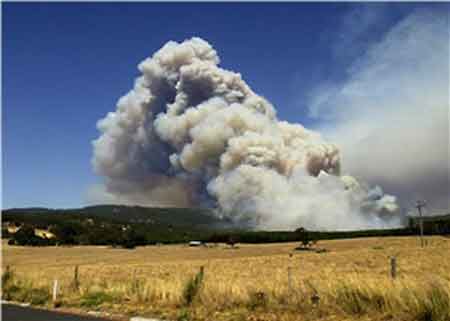 The majority of Maryvale’s plantation pine and “plantation” hardwood is sourced from Hancock Victorian Plantations. Hancock was providing about 300,000m3 of hardwood per year up to 2009, but several thousand hectares of their hardwoods were destroyed by the 2009 Strzelecki fires. FoE estimates that Hancock’s annual amount of hardwood being sent to Maryvale has probably been reduced to around 200,000m3/yr because of the impacts of the fires. To complicate matters even further, Hancock have stopped planting hardwood entirely.

Since the 1990’s, it was discovered that bluegum plantations grow poorly in Gippsland. For this reason, Hancock gave up planting bluegums and started planting shining gum, in the higher elevations of the Strzelecki Ranges. FoE has noticed however that almost all of Hancock’s logged hardwood plantations are now being replanted as radiata pine. Probably because like bluegum, shining gum has also been growing poorly in many locations. Hancock’s hardwood contracts with the Maryvale mill also run out in 2030, meaning that if Hancock cannot supply the mill with 200,000 - 300,000m3/yr of plantation timber after 2030, where will that additional volume come from?

If one factors in the 600,000m3/yr ha of hardwood required to get Maryvale out of native forests and then an additional volume that Hancock will not be providing after 2030, then one could estimate that the amount of new plantation required would be closer to 70-80,000ha of hardwood needed to be planted within a decade.

Noone is exactly sure why hardwood plantations have not been able to grow to expectations in Gippsland. Some have claimed that climate change and drought are a major reason. Others have blamed it on saline groundwater and poor soil nutrients. The problem has been known since the 1990’s and FoE first became aware of it in 2007, when hundreds of hectares of failed bluegums were bulldozed near Briagalong. Whatever the reason, there is not a good track record in the region for planting hardwood plantations. 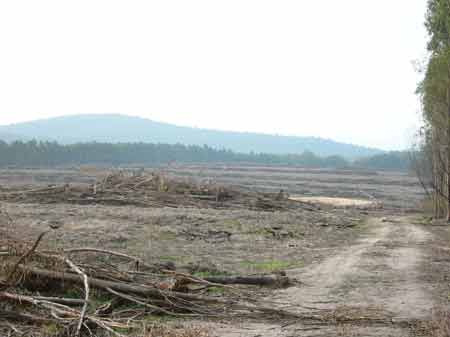 Even if 80,000ha of plantations were established, would they grow to predicted yields, when many grown previously have not? Some bluegum plantations that FoE have observed have yielded only 30% of predicted volumes. Will the plantations survive impacts of climate change and fire?

The State Government began planting new bluegum plantations in late 2019. The irony is that the new plantations weren’t really new at all. They were planted on ex Hancock bluegum sites near Yallourn North. A couple of hundred hectares were planted in 2019 and a couple hundred more have been planted this year, on an ex radiata pine plantation site near Maryvale. Perhaps 500-600 ha have been planted in total, far below the 5500ha/yr (or is it 8000 ha/yr) required to move the industry entirely into plantations by 2030.

Make no mistake, to get access to tens of thousands of hectares of land to establish plantations in Gippsland is no easy task. How viable is the land to grow trees. What price will land be purchased for? What will communities say? Why has the existing plantation industry in the region given up planting hardwood entirely, but the State Government has just started?

The scenario facing Maryvale is intense. Crunch time is near at hand. It is clear that the native forest of the Central Highlands cannot sustain the industry in any shape or form, yet it is also obvious that the mantra of growing hardwood plantations in Gippsland has also hit a wall. Unable to survive on either hardwood from native forest or hardwood from plantations, just how does Maryvale intend to keep operating?

Bluegum plantations growing in the Western Districts are already contracted for the international market and possibly up to 40% of bluegum plantations in that region are reverting back to farmland. How feasible is it to truck in bluegum from 500 km away to keep Maryvale operating? Hundreds of trucks per day would be required. A report in 2011 outlined some of the difficulties. Will Maryvale end up importing hardwood from Tasmania or even overseas in a desperate attempt to survive?

Recycled paper is also unlikely to save the day. In 2015, the company opened a $90m new recycled paper mill at Maryvale. The new mill could increase the amount of recycled fibre produced by the company from 15,000 tonnes to 50,000 tonnes, mainly for office papers. Whilst this development is encouraged it cannot meet the demand for the looming hardwood shortfall.

Does 2030 actually signify the date that Maryvale Pulp Mill will close down, taking most of Australia’s paper industry with it?