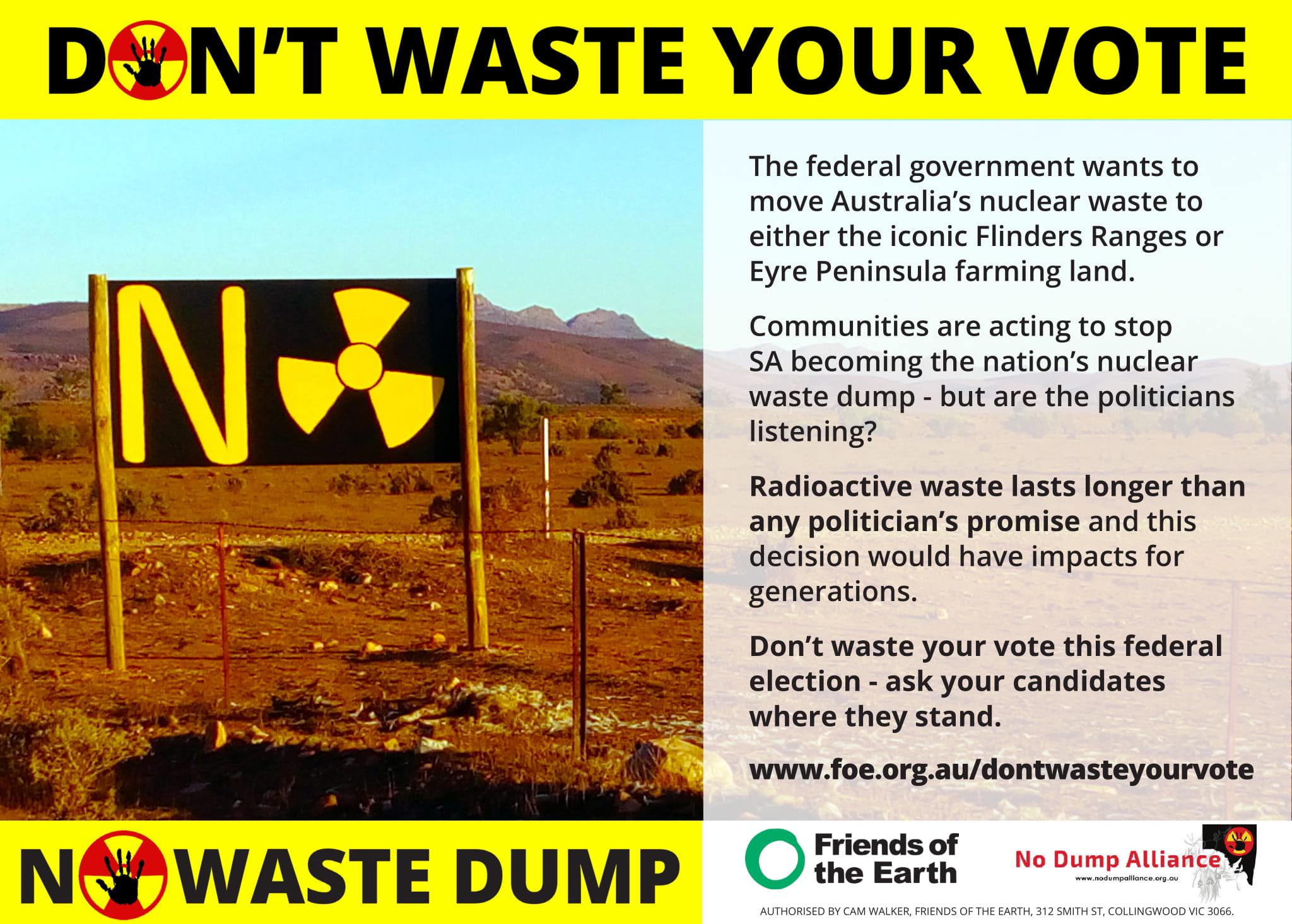 Don’t waste your vote this federal election ‒ ask your candidates where they stand and ask them to oppose the plan to turn SA into Australia’s nuclear waste dump.

For over two decades, successive Australian governments have tried and failed to find a site to dispose of Australia’s radioactive waste. The current federal government wants to establish a National Radioactive Waste Management Facility (NRWMF) in either the iconic Flinders Ranges or on Eyre Peninsula farming land. Labor are yet to detail their approach if they form government.

It is widely accepted that the site selection process is flawed and divisive. Current Minister for Resources Matt Canavan hoped to select a site last year. Community opposition and  legal challenges by the Native Title holders of the two affected sites have stalled the process. The plan remains strongly contested.

Australia’s radioactive waste needs to be  managed in the most responsible way. Rather than ask “Where can we put it?” we instead need to ask “How do we best manage this waste?” There is no  urgent need for this facility. Civil society groups across Australia are calling for an independent inquiry into the full range of future management options to ensure the best possible approach. It is astonishing that such a commonsense inquiry has never happened. Instead, governments have continually tried and failed to impose a facility on remote and regional communities.

This imposition has come with promises of economic and employment benefits, both of which have been exaggerated, according to a 2018 report by The Australia Institute. Many community members are concerned that any benefits will be far outweighed by negative impacts on existing industries such as agriculture and tourism.

The push for a waste facility  in regional SA has been accompanied by the alarming but incorrect assertions that without a national facility, Australians will miss out on access to nuclear medicine. The Medical Association for the Prevention of War (MAPW), many of whose members are medical professionals who routinely use nuclear medicine, disagree and make the case that nuclear medicine in Australia will continue, regardless of the timing or location of any waste facility.

Communities on the potential transport routes for the radioactive waste have also been excluded.  The site selection consultation process has been narrow in scope and detail. Whyalla, Port Pirie and Port Lincoln were named in a government report in 2018 as ports through which the waste might be transported, yet local Councils, port workers and the wider  community were not alerted to this by the project proponent, the federal government.

This material is best managed where it currently is until there is an agreed longer term solution. There are no barriers to extending the waste storage at Lucas Heights until a permanent disposal option is found. It makes no sense to double-handle this risk by moving this material without a credible disposal plan.

Radioactive waste management is a national issue.  The burden of responsibility should not be placed on small, regional and remote communities.

Radioactive waste lasts longer than any politician’s promise and this decision will have impacts for generations.

Support the call for a full, independent inquiry into the best way to manage our worst waste. Don’t waste your vote this federal election ‒ ask your candidates where they stand and ask them to oppose the plan to turn SA into Australia’s nuclear waste dump.

This decision will have implications for generations to come and should not be rushed.

So where do the parties stand?

If re-elected, it is expected that a coalition government would pursue the siting of a NRWMF in South Australia. This, however, is dependent on the outcomes of current court proceedings and on regulatory processes under the EPBC Act and the ARPANS Act.

If elected, it seems likely that current Shadow Minister Senator Kim Carr will be responsible for the National Radioactive Waste Management Project. It is unclear how the ALP will progress this issue. They have stated that “As this is a matter before the courts, we do not propose to pre-empt any decision until the Federal Court has made its ruling.”

The Labor Party held their national conference in Adelaide in mid December 2018. The policy they adopted regarding radioactive waste reads:

"Labor acknowledges that radioactive waste management is a complex policy challenge that requires the highest levels of transparency and evidence, while balancing the need of the community to benefit from treatments for diseases like cancer. Accordingly, Labor will act in accordance with scientific evidence, and with full transparency, broad public input and best practice technical and consultative standards, taking into account the views of traditional owners, to progress responsible radioactive waste management."

There is no mention of radioactive waste in the Greens election policy platform, however Senator Sarah Hanson-Young, who is responsible for the nuclear portfolio, has a webpage dedicated to the issue and is against the current proposal.

Senator Rex Patrick initiated a senate inquiry into the current process, and has said “The site selection process needs to be fair, not the sham that it currently is".

Henry Cox lives just north of Hawker and is running for the Senate due to his opposition to the waste dump.

HERE’S WHAT YOU CAN DO

Please send in a submission to the federal Department to register your opposition to the plan to dump on SA. This submission process is important ‒ the government will use it to claim 'broad community support' for the dump if it does not receive lots of opposing submissions. Please write your own submission or simply add your name to the submission drafted by the SA Conservation Council ‒ it will only take a minute of your time!

Please donate to raise funds to stop the nuclear dump.

Some Key Points to Consider