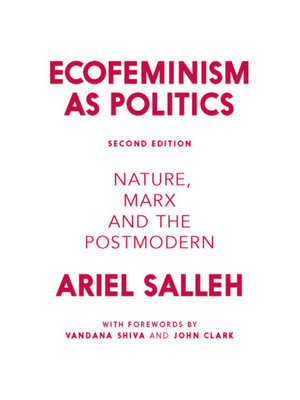 Ecofeminism as Politics: Nature, Marx and the Postmodern

An updated edition of Ariel Salleh's landmark exploration of the relationship between feminism and ecology, Ecofeminism as Politics is now a classic, being the first work to oﬀer a joined-up framework for green, socialist, feminist and postcolonial thinking, showing how these have been held back by conceptual confusions over gender.

Originally published in 1997, it argues that ecofeminism reaches beyond contemporary social movement ideologies and practices, by prefiguring a political synthesis of four-revolutions-in-one: ecology is feminism is socialism is postcolonial struggle.

Ariel Salleh addresses discourses on class, science, the body, culture and nature, and her innovative reading of Marx converges the philosophy of internal relations with the organic materiality of everyday life.

This new edition features forewords by Indian ecofeminist Vandana Shiva and US philosopher John Clark, a new introduction, and a recent conversation between Salleh and younger scholar activists.

"The combination of eco-socialist, feminist and decolonial perspectives is analytically and politically thrilling", writes Ulrich Brand, University of Vienna, co-author of Theorizing the Imperial Mode of Living. Maria Mies, ecofeminist activist and author of Patriarchy and Accumulation on a World Scale, writes: "Neoliberalism has not eliminated poverty, nor discrimination of women, nor exploitation of the Earth; neither economists, politicians, nor theoreticians know a way out. Marxists ignore both nature's and women's contribution to the production of wealth, but as ecofeminists show, this is the lost key to building another world.

Ariel Salleh is a founding member of the Global University for Sustainability, Hong Kong; a visiting professor of culture, philosophy and environment at Nelson Mandela University; and a research associate in political economy at the University of Sydney. She also co-founded the Movement Against Uranium Mining in Australia. Her other works include Eco-Sufficiency & Global Justice: Women Write Political Ecology (2009).

The body of Ecofeminism as Politics covers these topics:

Part I: Women and Ecopolitics

Body Logic: 1/0 Culture. Man/Woman=Nature. For and Against Marx. The Deepest Contradiction