The failure of a forestry giant's carbon offset project in Uganda 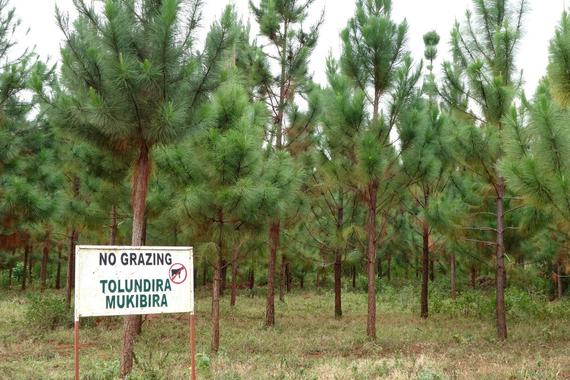 It has been two years since the landmark Paris Climate Accord, committing signatory countries to reduce their carbon emissions in an effort to stabilise the world's climate and ensure a fair and livable future. Marking this anniversary, the One Climate Summit was recently held in Paris, drawing world leaders and celebrities together from around the world to hatch plans to promote climate solutions.1 Given it is the world's poorest people – who are also the lowest carbon emitters – that are the most vulnerable in a climate changing world2, rich industrial polluting nations carry a significant responsibility in reducing global emissions. So what's their plan?

Building upon outcomes from the 2015 Paris Agreement, the One Climate Summit has emphasised the central role of green investments in combatting global climate change. The so-called green economy touts private sector companies and financiers as central actors in driving responses to the climate crisis.

But what if companies, financiers and others invest in climate solutions that do more harm than good? And what do we expect from investors when the failings of the green economy are exposed?

This project illustrates how climate change is increasingly misused as a pretext to impose new forms of colonialism in Africa.5 The significance of these findings is amplified given Green Resources is one of the largest industrial forestry operators on the African continent, with activities that spread across a number of countries.

Green Resources' Kachung project is supported by a number of international financial institutions – including Norfund, the Netherlands Development Finance Company FMO and Finnfund – who are implicated in Green Resources' poor conduct.

On the basis of an earlier expose6 of Green Resources, revealing mistreatment and violence perpetrated by the company in Uganda – through a campaign supported by Friends of the Earth Uganda – Green Resources' only carbon credit buyer, the state-owned Swedish Energy Agency, suspended funding in 2015. It has outlined ten actions for the company to undertake to reinstate payments. The following year, Green Resources' major shareholder, global forestry investment firm Phaunos Timber Fund, also divested from the company.

In the most up-to-date study of Green Resources in Uganda, this latest report shows that the company has failed to respond to the Swedish Energy Agency's requirements for reinstatement of carbon credit payments.7

The report finds that Green Resources over-inflates the employment opportunities it provides, as well as sidestepping responsibilities related to the health and safety conditions for its workers. Local villagers also continue to struggle to secure access to firewood and water, challenges Green Resources has done little to address. Most profoundly, villagers continue to struggle to access land to grow food and graze animals, driving food insecurity in the region.

Overall, the industrial monoculture plantation forestry and carbon offset project run by Green Resources at its Kachung site is simply incompatible with the presence and needs of local people who rely upon the same land for their livelihoods. The outcomes of this project directly undermine local livelihoods and threaten local villagers' very survival.

The failings of Green Resources' industrial plantation forestry and carbon offset project exposes, more broadly, the limits of carbon markets. While local villagers carry the social, environmental and other costs of this project, Uganda is unable to claim any of these carbon offsets as part of its own emission reduction targets.

This system is carbon colonialism at work, with the natural resources of an African country exploited by foreign interests under the guise of sustainable development, and at a high cost for the people and the environment.8

Such circumstances should be a matter of serious concern to Green Resources' shareholders and financers, who share responsibility with the company in supporting a project that has such a detrimental impact on local populations.

As the Swedish Energy Agency reassesses whether to resume payments to Green Resources in early 2018, Carbon Colonialism is an irrefutable indictment on the failure of Green Resources to address the harmful impacts on local communities that derive from its' project activities.4

The disconnection between the aspirations for market-based solutions to the climate crisis, as championed at the One Climate Summit, and the reality on the ground for villagers affected by poor carbon offset projects, is palpable in the case of Green Resources' Kachung project. The social and environmental costs of carbon offset projects must be included in assessing the viability of such market-based solutions. On the basis of the expose of these projects shortcomings, companies and financiers have a responsibility to act. If they fail to do so, they may bare the economic consequences and an eroded social license.