Friends of the Earth Australia News

Friends of the Earth Australia News digest from our national magazine, Chain Reaction #139, May 2021. 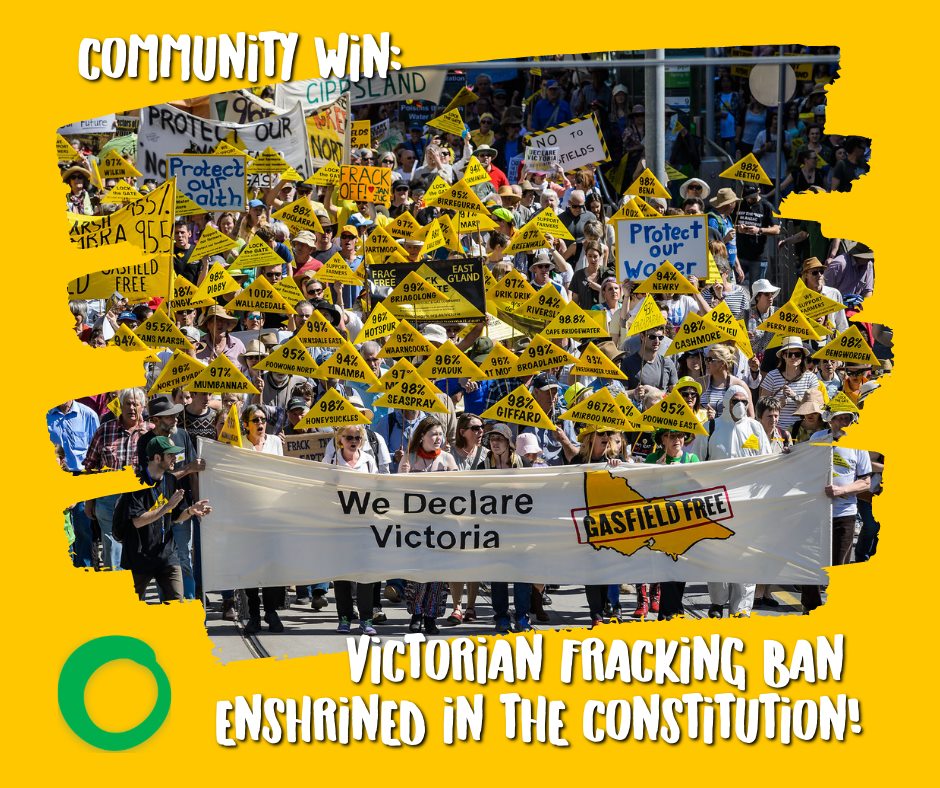 Testament to the strength of the community campaign to protect Victoria from fracking and unconventional gas, the Andrews government passed a bill to enshrine existing legislated bans on fracking and coal seam gas drilling into Victoria's Constitution.

Friends of the Earth (FoE) campaigned from 2011 until 2016 to help win the ban on fracking and unconventional gas drilling. FoE is delighted to see the ban enshrined in the state's constitution and believe that the outcome is an acknowledgment of the powerful community campaign against gas.

"This was a campaign that was driven – and won – by regional communities. It is a reminder that strategic and determined community campaigning gets results," said Cam Walker, campaign coordinator at FoE Melbourne.

"This is the first permanent ban on fracking in the country and has provided inspiration to countless people around Australia and the world. It has protected our land and water, farms and landscapes, and stopped greenhouse gases from being released into the atmosphere."

During the campaign, 75 regional communities declared themselves coal and gasfield free. Some 26 local councils expressed concerns about drilling. Tens of thousands of people across the state built political power that couldn't be ignored in the lead-up to the 2014 state election.

Read more about the historic campaign

Friends of the Earth welcome the decision to implement a cash for containers scheme in Victoria. FoE is a member of the Boomerang Alliance of groups who have been working nationwide on the issue for many years.

Whilst key design elements and collection arrangements are still to be worked out, the announced scheme means that:

Permission was granted by the South Australian Premier to "damage, disturb or interfere" with a sacred site risks destroying its cultural heritage and puts at risk the unique salt-lake ecosystem. The full extent of Lake Torrens has been protected as a National Park under the National Parks and Wildlife Act 1972 since 1991, and is recognised as an 'Important Biodiversity Area'.

Despite the dire state of the climate crisis, the Morrison Government continues to pursue both a 'gas-led' recovery and the expansion of fossil fuels. This includes opening up the pristine waters of the iconic Bass Strait to polluting fossil fuels companies that are intent on drilling for oil and gas.

The Bass Strait supports thriving tourism and commercial fishing industries. Southern rock lobster fishers have already expressed their fear that plans to use seismic testing could threaten crayfish populations, and hence their industry.

The best available science tells us that governments must rule out new fossil fuel developments if we're to avoid catastrophic climate impacts such as the horrific Black Summer bushfires of 2019-20. Allowing commercial drilling is just too risky for marine environments, local communities and businesses, and the climate.

Friends of the Earth are calling on Scott Morrison to protect Bass Strait and ban all new fossil fuel exploration and production and provide permanent protection for the Strait from risky oil and gas drilling.

Next Climate Strike declared by students: May 21 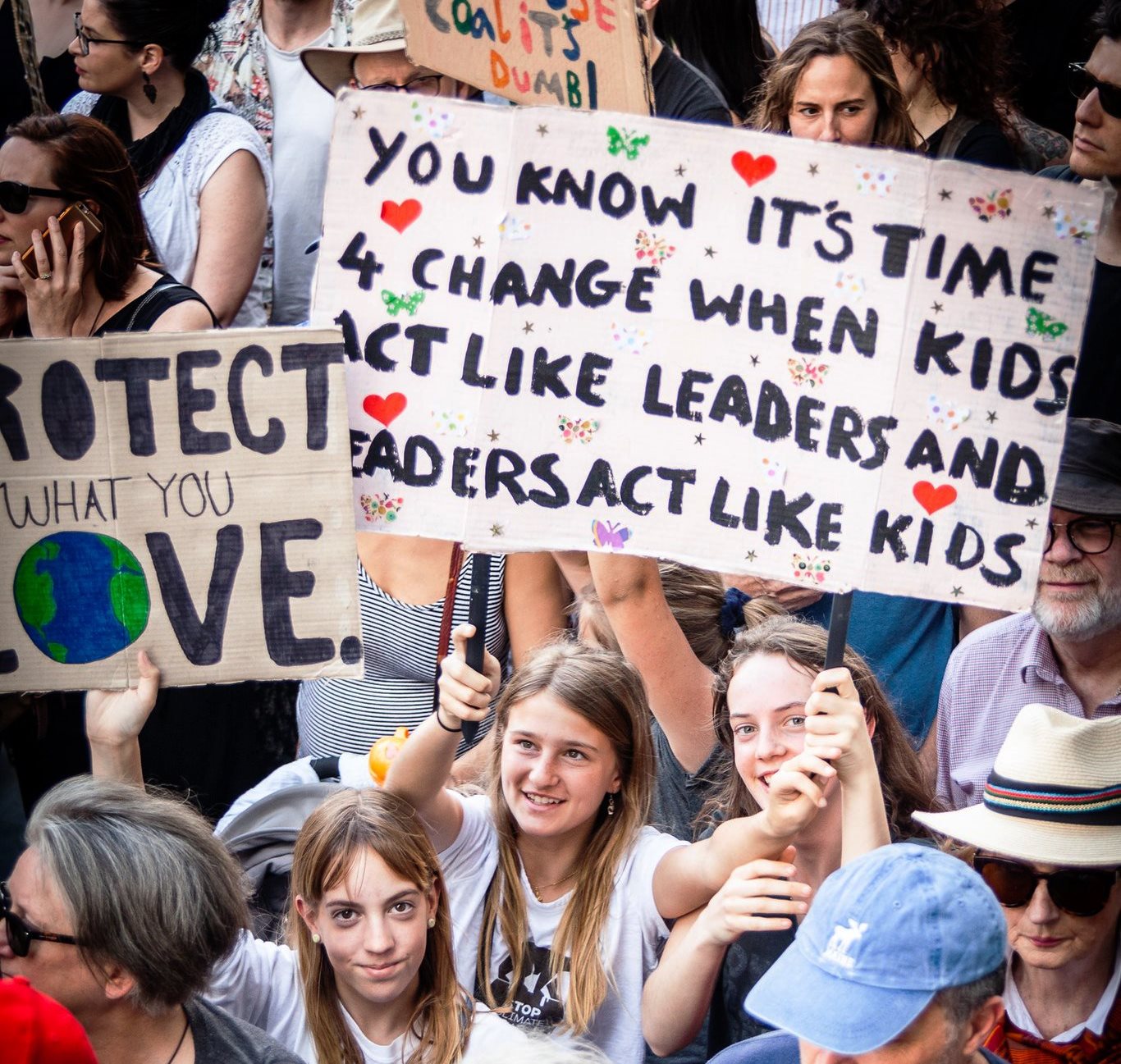 With large parts of NSW and south-east Queensland experiencing a flooding emergency, and a devastating cyclone in WA this year already, School Strike for Climate have called for another strike on 21 May 2021 to stand with all the people who have been impacted- particularly those who have lost homes and livelihoods, been evacuated or stranded..

"We saw just over a year ago extreme bushfires in our local area," said Will Potter, Gundungurra man and co-founder of SS4C in the Hawkesbury and Blue Mountains area. "This is what climate disruption looks like. This is the climate crisis in our daily lives. It's already costing us. Our government is not taking action, and so these impacts will worsen into the future."

The Morrison government could be protecting our climate, land and water, and creating thousands of new jobs by growing Australia's renewable energy sector and backing First Nations solutions to protect Country. Instead, they are planning to line the pockets of multinational gas companies, which are fuelling the climate crisis.

Find your nearest May 21 Strike

Protests have continued to halt logging in East Gippsland in a contentious area of forest near the Errinundra Plateau. The area has been identified by the government and conservationists as a critical area for threatened species impacted by the fires, plans to log have been thwarted by community actions which have prevented logging from going ahead.

Goongerah Environment Centre (GECO) worked on a new report with East Gippsland environment groups and Victorian National Parks Association which shows that the Errinundra Plateau is a critical refuge for species like the Greater Glider, which are still threatened by logging where they're found. Almost 60 coupes are scheduled around Errinundra, and 90,000 ha are scheduled in forest refuges across Eastern Victoria.

Friends of the Earth were devastated to hear of the loss of Chris Fowell who was found deceased by community members from Camp Errinundra, who together with search and rescue and SES volunteers exhaustively searched for Chris since he went missing from the camp in April.

Chris was a veteran of the Errinundra campaign and Daintree forest blockades of the 1980s.

Our deepest condolences to Chris' family, friends, those who knew Chris, people at camp, and those who helped with the search.

These animals were severely impacted by 2019–20 bushfires and all found to be among the 'fauna species of most immediate concern' by the Victorian government's own preliminary response to the bushfires.

WOTCH needs help to raise $55,000 for expert scientific witnesses to put the best case forward to protect native habitat. These experts are some of the best in the field and the evidence they provide regarding the focus species is critical.

Australia has traditionally relied on coal fired power stations to meet its energy needs. This is now rapidly changing, yet the federal government refuses to accept reality.

Up to five of Australia's remaining 16 coal power plants could be financially unviable by 2025 due to a flood of cheap solar and wind energy entering the electricity grid.

Will the federal government accept the fact and intervene to support affected communities through the transition, or will it continue to pretend there is a role for coal in a climate change future? Choosing to do so will mean they fail coal reliant communities.

Please email our PM to urge him to establish a Just Transition Authority.

Friends of the Earth were alarmed to learn that a koala was horrifically burnt at Alcoa's Portland Aluminium smelter, in south-west Victoria in late January. The animal apparently entered the facility and ended up climbing some type of attachment in the smelter's anode room. The burnt koala was removed, put in a bag and then released at a nearby golf course 3.6 km away. Apparently, this is not the first time that koalas have been released at the golf course from the smelter.

The issue forced a response from Alcoa stating that they will:

Whilst Friends of the Earth supports initiatives that will improve koala welfare, we are disappointed that most of these steps were taken only after media attention was brought about by local residents.

Friends of the Earth Melbourne have launched a new collective to work to protect koalas in VIC.

All major projects require underwriting insurance for public liability, plant and equipment damage and workers compensation, among other things. It is very likely that Adani still hasn't secured the insurance deals it needs to build the mine and rail line, and without insurance it can't carry out the work.

In June 2020, Lloyd's of London, the world's leading insurance market, confirmed that some of its members are insuring Adani. Lloyd's current policy allows its members to continue insurance of existing coal projects until 2030, despite the climate science.

The Stop Adani campaign has been contacting Lloyd's members one by one to rule them out. In total, 34 major insurance companies have publicly ruled out insuring Adani's coal project, including 25 Lloyd's of London insurance syndicates.

With the federal government refusing to act, we need to see greater leadership from states like Victoria when it comes to tackling the climate crisis. Strong emission reduction targets will require more renewable energy, improved public transport, greater protection for forests, create jobs, and more.

Friends of the Earth and University of Melbourne released a reports with modelling that shows the Victorian Labor government could create over 50,000 jobs by setting science-based Emissions Reduction Targets.