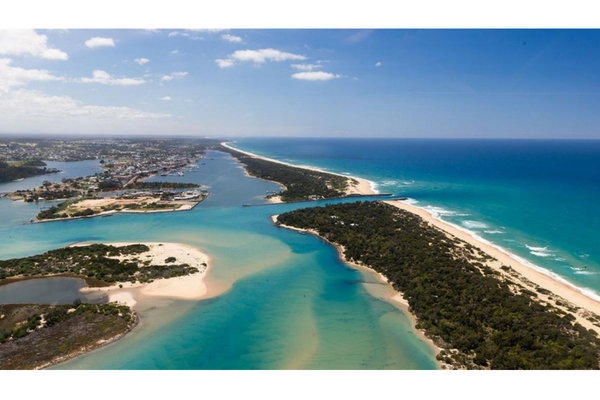 Ross Scott was the subject of an article that I wrote for Chain Reaction in 2010, in which I described his fight to save the Gippsland Lakes and quoted him describing the Lakes system as a "marine morgue".

Ross has an engineering background and has extensive experience in river management, civil engineering project management in Australia, and aid projects in PNG, Fiji and Cambodia.

This experience combined with visiting, and later living, at the family property on Duck Arm for over 58 years has given him a range of skills and experience that has motivated him to address the current and rapid degradation of the Gippsland Lakes' ecology.

The Gippsland Lakes are the largest inland network of waterways in Australia. Historically, the Lakes were a barrier estuary system that was closed to the sea on most occasions. They are a complex and unique set of diverse environments driven by river discharges; and its unique geomorphology and wetland system that attracted Ramsar status. (The Ramsar Convention is an intergovernmental treaty that provides the framework for national action and international cooperation for the conservation and wise use of wetlands and their resources.) The Lakes are further protected under Treaties with China, Japan and South Korea.

In theory all should be well, but in 2015 the Victorian Auditor-General delivered a damning report on the mismanagement of Victoria's 10 Ramsar-listed wetlands. In short, it stated that Parks Victoria and the state Department of Environment, Land, Water and Planning had not been monitoring and testing, yet had been advising the federal government that there had been no change in the Lakes' ecological character since the 1982 Ramsar listing.

The Auditor-General's report now has departments both state and federal in denial and defence mode. They are not prepared to address the reasons for the Lakes' ecological demise, and state that there is no evidence to suggest that their ecological function has crashed. As there has been inadequate monitoring and testing, they are correct that there is no scientific evidence to support community concerns. But there is substantial credible anecdotal evidence. Hence the request to both state and federal governments for an audit of the ecological function of the Lakes. Both requests have been refused.

The last audit of the Lakes was by the CSIRO in 1998. It is argued that without a more recent audit, targeted rehabilitation will not be possible. But the current situation of inadequate information and data on the Lakes' ecology has been the basis on which the following deeply flawed desktop reports have been prepared on the Lakes. These flawed reports have included:

So how did the Lakes become so environmentally degraded? An entrance to the ocean was constructed near Lakes Entrance in 1889, and this allowed salt water to enter the Lakes and impact on the fringing vegetation. Since then, the Thomson and Blue Rock Dams have been constructed, and intense irrigated farming in West Gippsland has further reduced fresh-water flows to the Lakes.

In 2002, the East Gippsland Shire applied to the federal government for funding to investigate deepening the entrance to the Lakes, to cater for deep draft vessels. These vessels service the offshore oil and gas platforms in Bass Strait.

In 2008 a 'trial' dredging of the entrance was undertaken using a hopper dredger from New Zealand that visited annually. The dredging permit was based on dodgy and misleading data and rushed through over the Christmas / New Year period in three months without an Environmental Effects Statement.

The previous side-cast dredger maintained the entrance at 2.5 metres, and the new permit allowed for a total depth of 4.5 metres. Gippsland Ports continued to dredge the entrance for the next two years without a permit, and were reported to the federal government by the Victorian EDO.

A hurried and flawed application resulted in Gippsland Ports then being issued with a 10-year dredging permit to dredge to 3.5 metres, the requested navigable depth required, plus an extra two metres allowance for slump and accretion, making an actual dredging depth of 5.5 metres.

Gippsland Ports have recently taken delivery of a hopper dredger that is stationed at Lakes Entrance. The two-metre allowance for slump has not been removed from their dredging permit, and they continue to maintain the entrance at two metres deeper than that required for navigation.

As a direct result, the entrance cross-sectional area has doubled, and the tidal speed through the entrance has increased from three knots to 7.4 knots. The Tidal Prism, the amount of ocean water entering the Lakes each tide, has massively increased, as has the tidal range of ocean water entering the Lakes, to the extent that surface water is now classified as 'highly saline' (i.e. it can kill fresh-water plants).

The salt-water wedge has intruded up the lake chain as far as the Port of Sale (a distance of over 100 km), endangering the ecologically significant Heart, Dowd and Clydebank Morass.

The ecological impacts on the Lakes are stark:

Ross has recently written to the Victorian Premier advising that Australia is in breach of the Ramsar Agreement and its Treaties with China, Japan and South Korea to protect the habitat of migratory wading birds. He has requested:

There seems no logical reason why the entrance is being maintained so deep, and why the state government will not monitor the adverse impacts of the dredging on the lakes ecology. But slowly, ever so slowly, it has dawned on Ross that the lakes are being managed to a marine condition. He became aware that:

To address these demands it appears that the state government is managing the lakes into a highly-saline marine condition. To justify Melbourne's increased harvesting of the Lakes' feeder streams, it will be argued that fresh water flowing into saline Gippsland Lakes is going to waste and should be harvested instead.

Ross is now heading for 81 years, and his wife Gayle (of 58 years) reckons that if he wasn't fighting environmental vandals he would be dead by now!

Anthony Amis is a member of Friends of the Earth (FoE) Melbourne and FoE Australia's spokesperson on pesticides & drinking water.