Speakers from across the Pacific Islands and Australia came together on the 11th October 2019 at The University of Queensland’s Global Change Institute to discuss the specific human rights, including Indigenous rights, immediately challenged by the global climate crisis. The conference showcased stories of vulnerability, but also resilience; demonstrated via Indigenous Australian and Pacific Islander experiences on the frontline of climate change impacts, but also as global leaders in charting responses that uphold human rights. 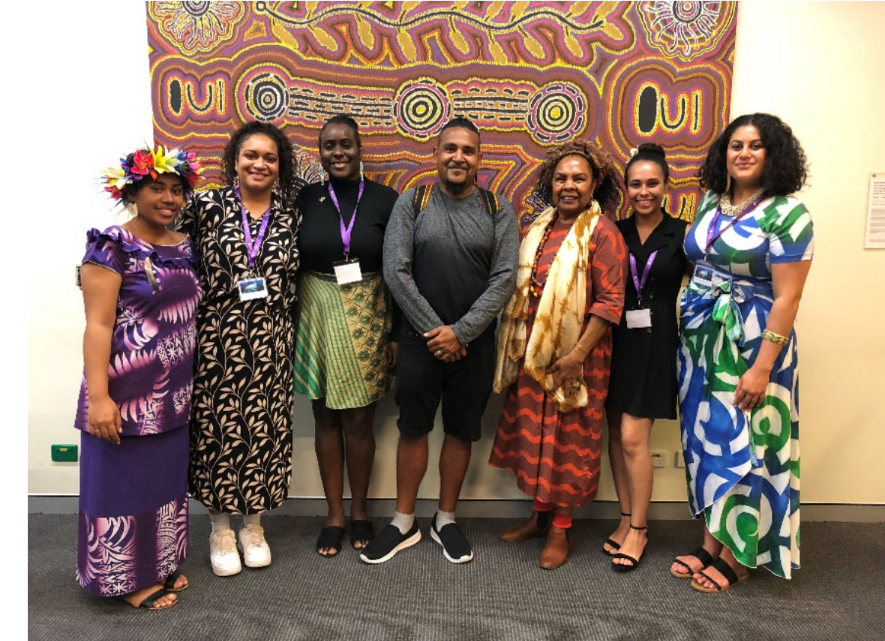 Key themes around the role that human rights play in experiencing and responding to climate change were outlined in keynote addresses from Dr Anne Poelina (Nyikina Warrwa Traditional Custodian from the Mardoowarra), Tony McAvoy SC (Australia’s first Indigenous Senior Counsel) and Genevieve Jiva (coordinator of the Pacific Islands Climate Action Network, based in Suva, Fiji). This was complemented by panel sessions and round table discussions on:

Panelists came from a range of backgrounds and organisations. A large portion were Indigenous Australians and people from Pacific Island heritage who generously shared their poignant stories of local resilience in the face of climate chaos, as well as their activism and leadership in ensuring climate justice. The power of centring Aboriginal, Torres Strait Islander and Pacific voices could not be missed at this event; with Genevieve Jiva (coordinator of the Pacific Islands Climate Action Network) describing this as: “The first time we have not been token in climate debates”. 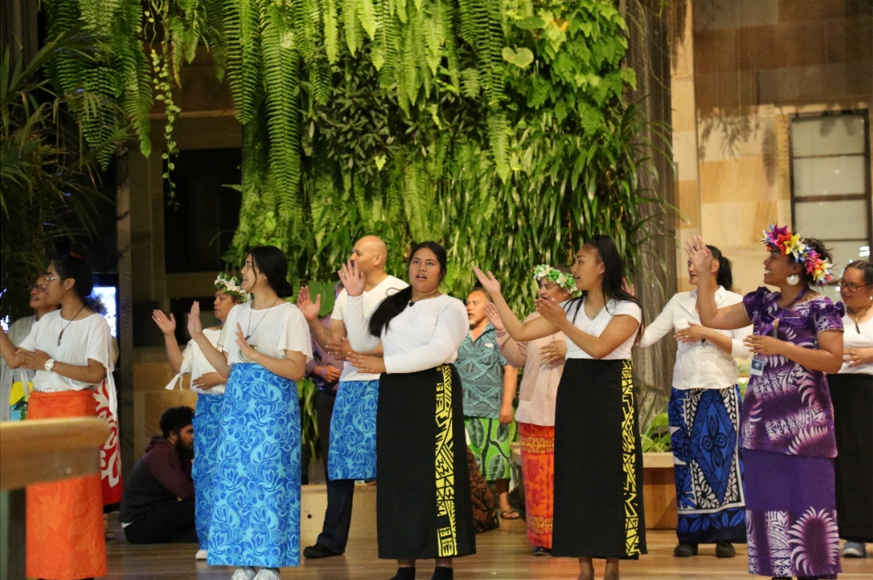 Some speakers shared their personal stories – including Gladys Salirade, who described the disappearance of her grandparents island due to rising sea levels, and Aminata Moreseu-Diop, who spoke about the particular issues facing young people, including in the Torres Strait. Panellists also reported on various climate justice campaigns, including the vital role of culture and sovereignty to these campaigns. Amongst these speakers were Lisa Sipaia Baker, Robati Harrison and Tapenaga Jnr Reupena from Pacific Climate Warriors, and Lisa Viliamu Jameson from Pacific Climate Warriors/350 Australia.

Meanwhile, Murrawah Johnson, youth spokesperson for the Wangan and Jagalingou Family Council, described their remarkable 5 year campaign against Adani’s proposed Carmichael mine that would destroy their country. Yessie Mosby, a Masig, Torres Strait representative (and represented at the United Nations by Client Earth), reported on their internationally landmark case being brought to the United Nations against the Australian Government for failure to take action on climate. Taukiei Kitara, Stella Miria-Robinson and Sailoto Liveti Mosby, from the Pacific Islands Council of Queensland, shared powerful stories of community building within their communities and front line campaigning, while Robyn James and Ruth Konia from The Nature Conservancy described the vital role of women in conservation and climate resilience projects. Barristers, solicitors and legal scholars explored the avenues for climate change litigation provided by human rights instruments – including Brisbane Barrister Chris McGrath, Justine Bell-James from the TC Beirne School of Law, Sean Ryan from the Environmental Defenders Office, and Michelle Maloney from the Australian Earth Laws Alliance. Other aspects of the debate explored included gender framing and issues – Nicole George from The UQ School of Political Science and International Studies – and community adaptation to sea level rise – Simon Albert from the UQ School of Civil Engineering. 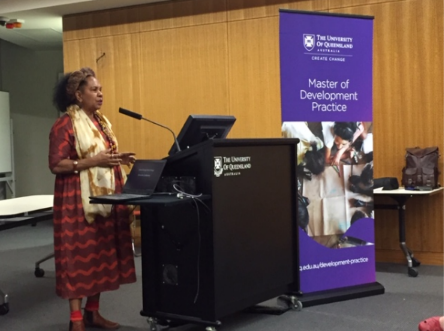 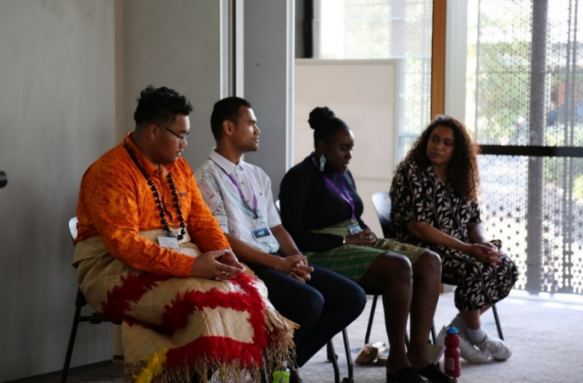 Key sentiments from the day were clear: all Indigenous Peoples and Pacific Islanders insist sovereignty is vital to ensure communities are in charge of their own destinies. Local and Indigenous peoples must also have their right to life, a future and culture protected in the face of the climate crisis. With strong spiritual and cultural connections to country and water, leaving homes to re- settle elsewhere in response to climate impacts not only means a loss in livelihoods, but also the destruction of identity, history, knowledge, language, as well as the culture of entire nations. The message was loud and clear that climate change is not just a science issue, but also a social justice issue. Participants were also invited to read aloud UQ Pro Bono Centre’s Pledge to Raising Awareness of the Issue of Climate Change, which can be found here.

Those fighting for their rights are doing so in a broken system. To move forward in this space, there is a need for transformations across scales. At larger scales, there is a need to re-define sovereignty to better align with perspectives in the Pacific Islands, and this involves integration of relationships with oceans so that we shift our understandings and framing of the Pacific as ‘small islands' to ‘ocean states’ that are rich with culture and empowered communities. We also need better streamlining between state and federal governments, more financing to fight the climate crisis and uphold rights, better alignment of overseas aid with local voices and the cultural survival of Pacific and Indigenous Peoples, a re-framing of Australian identity, and a better integration and recognition of Indigenous knowledge and solutions. Society needs to stand behind and support Indigenous populations until the end of the line, and not just until interests diverge. At smaller scales, individuals need to better use networks and voices to help share the stories of vulnerability and resilience from the Pacific and Indigenous communities. If we save the Pacific and Torres Strait islands, then we save the world, and if we utilize Indigenous knowledge and place it at the centre of how we respond to climate change then all of humanity has a chance to survive in the face of this global crisis. 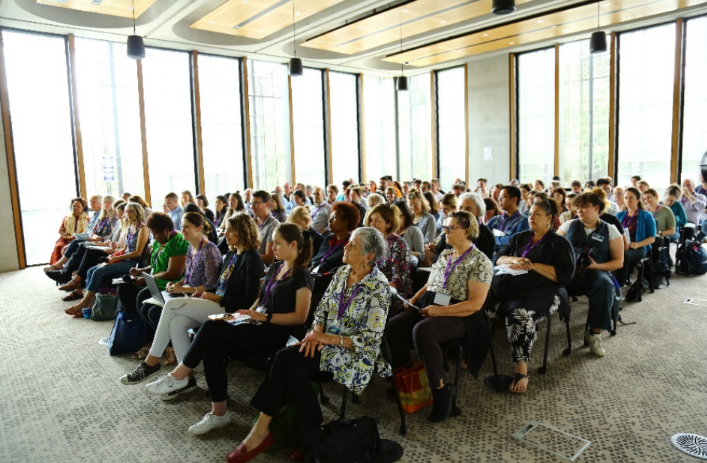 Whilst you are here, please make a tax deductible donation. Friends of the Earth relies on donations from people like you to keep running campaigns for social and environmental justice.
Donate now
Climate Justice