Is Australia ready to address the challenge of forced climate migrants? 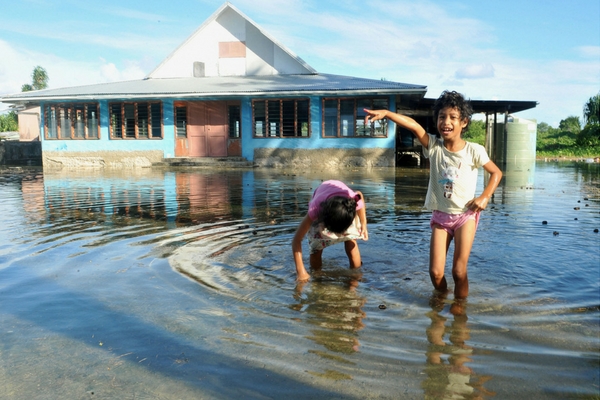 Friends of the Earth Australia has welcomed the public communication by Shadow Immigration Minister, Richard Marles MP*, indicating that Labor is finally willing to take up in a serious way the issue of Pacific people forced to migrate because of climate change related displacement. Mr Marles has stated that “Australia being a destination for climate change migrants has to be up for discussion.”

Ever since efforts in 2000 and 2001 by representatives of the government of Tuvalu to get a hearing on this issue were rebuffed by the Howard Government, Friends of the Earth Australia has been advocating in multiple fora for Australia’s recognition of its obligation to respond to the stated needs of Pacific Island leaders. FoEA has argued that Australia should do this by pre-emptively developing a policy formation and implementation process on the issue of climate change related displacement.

However, “framing the challenge, as Mr Marles does, as demanding a simple humanitarian response, and setting it in the context of current domestic public debate about refugee and migrant intakes, does not adequately address the issue” says Wendy Flannery, convenor of the Climate Frontlines collective in Friends of the Earth Brisbane. “Any policy framework has to include a human rights dimension. It must address, for example, the complexity of the contexts in which climate change related displacement and relocation is already occurring in the Pacific, as well as, ultimately, issues of the loss of territorial integrity and sovereignty.”

“A human rights or “climate justice” approach must also recognise Australia’s responsibility as a catalyst for other people’s displacement. Our top climate scientists and economists continue to point out that Australia is still the highest per capita emitter of greenhouse gases globally. The federal government’s current lack of ambition in its reduction targets in the lead up to the international climate negotiations in Paris – referred to by Kiribati President Anote Tong as “selfish” – is likely to ensure that it will retain that status”.

In claiming that “the desire for the peoples of the Pacific to migrate because of climate change will not happen tomorrow”, Mr Marles “does not take enough account of the urgency of the situation”, says Ms Flannery, including the fact that significant community relocations have already occurred, others are in process and the government of Kiribati already has a “Migration with Dignity” policy in place. The introduction to the 2009 Moana Declaration issued by Pacific church leaders refers to the “imminent threat of forced relocation and displacement faced by Pacific peoples”.

Some of the key proposals of this Declaration could well provide important guidelines for the work Labor needs to do, in intensive consultation with its Pacific neighbours, to help Australia fulfil its obligation in relation to Pacific climate change migration. These call for intensive consultation at all levels, and highlight the need to cater for “the specific and unique situation of persons, communities and states affected by climatic induced climatic induced catastrophes”.

“With the door being opened by Richard Marles, now is an opportunity for Australia to start exercising real leadership on this issue”.