Janesville, Wisconsin ‒ rebuilding after the closure of General Motors 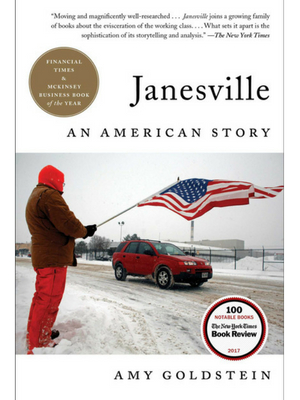 Review by Cam Walker ‒ Friends of the Earth Melbourne.

The world's economy is in a time of rapid transition and transformation. And while the development of new industries brings jobs and opportunities, many people are left behind as traditional economies collapse or move offshore.

In Australia, we are witnessing the end of the mining boom and the loss of local car manufacturing. Coal power is waning, with closures starting in places like the Latrobe Valley, and native forest logging continues its slow decline.

What happens to those who have to survive beyond the loss of the economy they have relied on? While increasingly governments are responding to changes through intervening with buy outs, retraining, alternative development and transition programs like the Latrobe Valley Authority, the fact remains that these changes can have devastating impacts on communities and the individuals who live in them.

Janesville is the story of what happens after the closure. In this case, it is the story of Janesville in Wisconsin in the USA after General Motors closed the huge automobile plant that had been the basis of employment in that town for two generations.

While it is billed as being 'an American story' it has resonance for everyone concerned about the human cost of transition. Journalist Amy Goldstein spent years after the closure visiting Janesville to see how the community would rebuild. The lessons are universal:

Local communities are held hostage to the profit race by corporations and big picture economics, and are often set against each other (different cities had to offer inducements to GM to ensure their factory would be the one to stay open). This bidding war is demoralising and people can feel they have no power.

Once the work is gone, the power of the union wanes, and with it the social benefits that come from having a strong voice for organised labour.

While government support post-closure is essential, it is clear that real outcomes will be generated where the local community control the purse-strings and create the programs, rather than having them airlifted in from a distant government.

A non-partisan response is essential: in this case Democrats and Republicans were able to work together to defend jobs, at least in the first few years after closure. But the 'what comes next' debate – what type of new industry does the community want – is where the ideology kicks in and social cohesion can be lost.

Government programs tend to focus on re training rather than job creation. This sometimes just pushes the problem into the future as re-trained workers then find that there are still no jobs they have qualifications for. In Janesville training needs swamped the ability of education providers, at least in the early days. But over time local providers started to work together to deliver programs, filling the space that might often be filled by government providers.

When local businesses (and importantly, local banks) join together to develop a vision and plan for the city, with strong buy in from service providers and NGOs, great things can happen. Philanthropists joined union officials and local businesses to produce an economic development plan called Rock County 5.0 which had five key aims:

The financial and personal crisis that happened as a result of closure took several years to peak. This is important in terms of planning for transition. It was several years later that bankruptcies started to grow, property values dropped, homelessness increased, etc. One good initiative involved local banks joining together to develop a way to reduce the number of foreclosures that were happening. For instance, they provided free financial counselling, offered one year's grace on mortgage payments before foreclosure, etc.

Community involvement was essential to see the community through: food drives, support for school kids whose families were struggling, the rise in depression and substance abuse that follows mass job loss, etc. Even celebrations like the annual Labor Day street parade were important to keep a sense of optimism in the future.

The book covers some the federal government initiatives that were developed by the Obama administration to respond to the massive job losses happening in dozens of cities. This is a useful book for anyone concerned about how to do transition well. This is not a book filled with political theory: it simply tells the story of what happened next for a range of people whose lives were dramatically affected as they lost their job or saw their community transformed and people flooding out of the city in the hope of finding work elsewhere.

It shows that a strong community with high levels of civic engagement and cohesion is more likely to survive the trauma that comes from large scale closure of industry. As noted by one local, Bob Borremans, the "best solutions to local problems come from the creativity and ingenuity of community". The job of government is to support the creation of this vision, not to drop in services that simply may not work or be appropriate to local needs and realities.