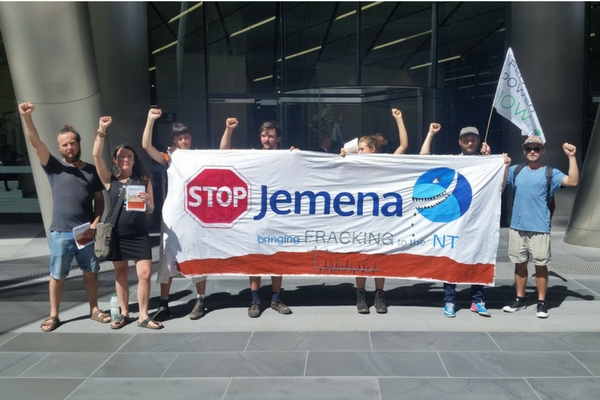 Friends of the Earth Melbourne and Quit Coal campaigners joined with concerned citizens gathered outside Jemena’s Melbourne headquarters to protest against the Federal government approval of the Northern Gas Pipeline. The group claimed that the pipeline, if built, will facilitate controversial on-shore unconventional gas fracking in the state and wished to express solidarity with Traditional Owners in the NT.

Despite the approval and claims that the pipeline will transport predominantly conventional gas, Jemena has repeatedly refused to sign agreements with Traditional Owner groups guarenteeing that fracked gas from unconventional gasfields will not flow through the pipeline.

Friends of the Earth joins the call for Jemena to end the speculation and sign an agreement with the Traditional Owners and other concerned groups guaranteeing that no fracked or unconventionally mined gas will flow through the pipeline.

“We are worried about our Country. We want the government to know we are standing against fracking,”

“We want our land to be clean and healthy. We say ‘no fracking’ because otherwise we could have more earthquakes and risks to our water basin."

The former conservative Country Liberal Party conceived the pipeline. They suffered a major defeat at the 2016 election, where opposition to fracking was high on Territorians’ agenda.

Despite this, Jemena won the contract to build the gas pipeline, with building said to be starting early this year. This contract has been criticised by the South Australian Minister for Mineral Resources and Energy, Tom Koutsantonis, as a “very bad outcome for the nation”.

The Chinese and Singapore Governments wholly own Jemena. The pipeline project is being financed by these Governments, seeking to charge the highest tariffs in Australia for the transport of gas at 0.23 cents per kilometer. This is almost double than the average 0.13c tariff/km charged in Australia.

Friends of the Earth's Phil Evans stated that "the NT pipeline will not provide an energy solution for the East coast domestic market, but rather will ramp up export and further exacerbate supply issues and push up prices." 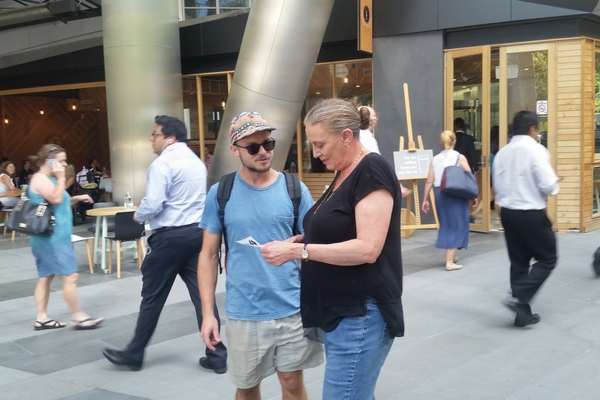 The Northern Territory is one of Australia’s, and the worlds’ most pristine tourism icons and last remaining unindustrialised landscapes. It boasts some of Australia’s largest remaining free flowing rivers, thriving and unique Indigenous cultures and a low-carbon economy based on a service economy, successful natural and fishing tourism, agriculture and pastoralism.

At present, more than 80% of the Northern Territory is under application for onshore gasfield exploration including approximately 40% that has already been approved for shale fracking exploration. For now, community resistance has kept any commercial shale gas production offline, with a temporary moratorium on unconventional gas fracking in place while an inquiry into the controversial industry is carried out.

We call on the NT government to follow the lead in Victoria and to go one better than the current moratorium and place a permanent ban on all unconventional gas mining like fracking.