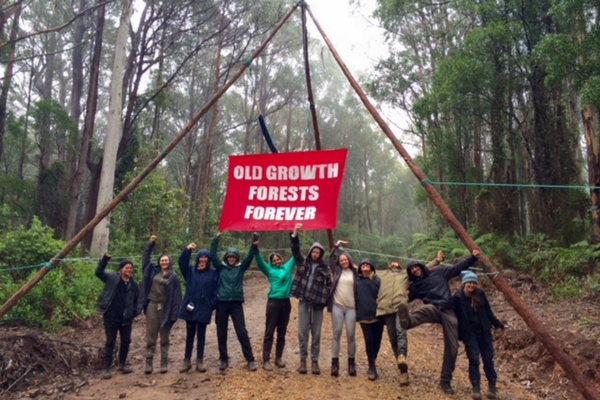 Forest conservationists who established a blockade of old growth forest in East Gippsland are celebrating today after environment groups secured a legal injunction that has stalled the logging operation.

Controversy erupted last week when VicForests constructed a road into the forest to commence logging. Goongerah Environment Centre launched an online petition calling on Environment Minister Lily D’Ambrosio to step in and protect the old growth forest, the petition has so far attracted over 6500 signatures.

Lawyers from Environmental Justice Australia  acting for Fauna and Flora Research Collective secured a Supreme Court injunction this morning to halt the logging arguing that the government has not protected the minimum required area of old growth forest in East Gippsland.

"It's a relief that this precious area has been given temporary protection, however it's disappointing the state government failed to act and community groups have had to take legal action to force the government to protect old growth forests as they are required to," said Goongerah Environment Centre and Friends of the Earth spokesperson Ed Hill.

“It’s absurd that the government refused to prevent logging and are now going to spend tens of thousands of tax payer’s dollars in a court battle arguing they don’t have to protect old growth forests. The government are completely out of touch, not only with their legal obligations but with the community, who overwhelmingly support the protection of old growth forests,” said Ed Hill.

"Twenty people took peaceful direct action to prevent logging from starting as the government failed to protect this forest, now that the Courts have ruled that no logging can take place until legal proceedings are resolved the blockade camp is celebrating," said Ed Hill.

"Protestors have vowed to return to the forest if logging does go ahead after legal proceedings have run their course, logging of old growth forests in a rich state like Victoria in 2017 is completely unacceptable and people will peacefully protest with the backing of the Victorian community who overwhelmingly want to see Victoria's forests protected from logging,” said Ed Hill.

"The Minister's announcement that some trees would be protected did not go far enough to protect this forest. So called habitat trees that are left standing by loggers are almost always killed in the post logging burn conducted by VicForests and the Department, grave yards of dead and burnt so called habitat trees can be easily seen in almost every logging area in East Gippsland," said Ed Hill.

"The forest was still going to be clearfell logged and burnt even with the Minister's proposed protections, any logging of old growth forests in Victoria in the 21st century is unacceptable to the overwhelming majority of Victorians, it's not the 1920s anymore we don't need to be logging untouched old growth forests at all."

"This forest is part of Victoria's forest heritage, a rare example of what our forests looked like hundreds of years ago. To continue to destroy these last remaining unprotected old growth forests is not only having a profound impact on biodiversity and the threatened wildlife that depends on them but it's also robbing future generations of experiencing these forests that remain in a pristine untouched state."

​"Daniel Andrew's must move the government's environment policy into the 21st century, protecting East Gippsland's highly valuable and biodiversity rich forests must be at the top of his list and will win widespread support from the voters who overwhelmingly want these forests protected from logging."

"VicForests is applying for Forest Stewardship Council certification later this year, this certificate is internationally regarded as having the strictest environmental standards and prohibits logging in old growth areas and threatened wildlife habitat,”

“The logging that was to take place in the Kuark forest and many other forests in East Gippsland is completely out of step with the strict standards required by the FSC certificate, unless VicForests make drastic changes to their practices and protect high conservation value forests they will fail achieve FSC certification and the much needed access to timber markets that increasingly demand sustainably sourced FSC certified products.”