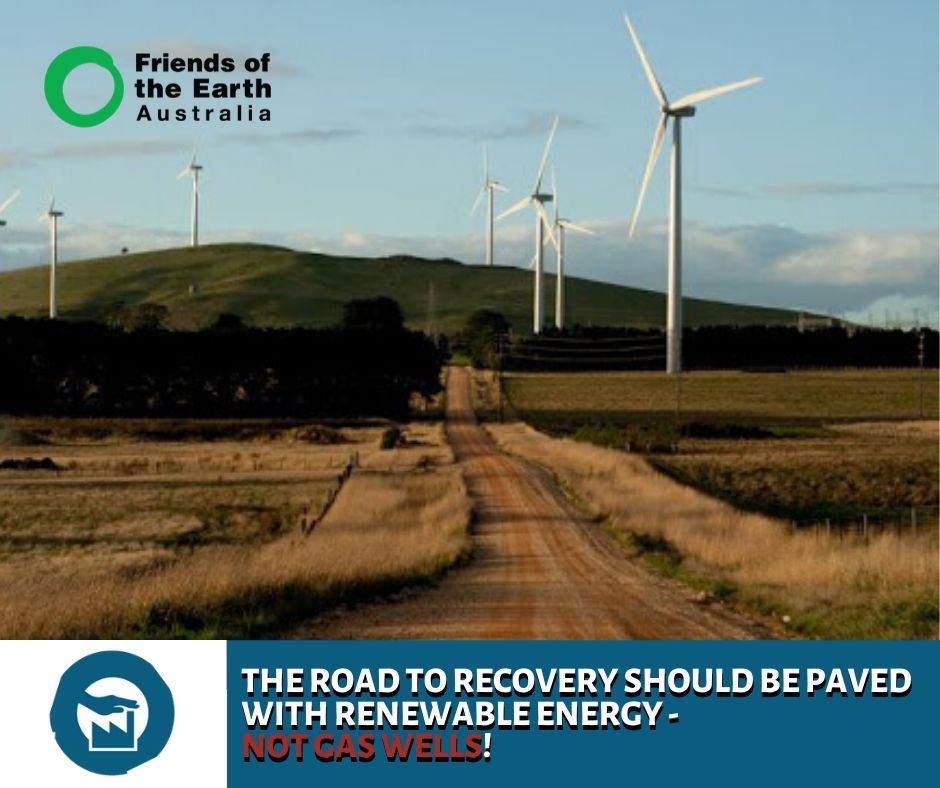 Friends of the Earth Australia calls for the Morrison government to rule out public funding for fossil fuels after a leaked report from the National Covid-19 Coordination Commission (NCCC) urges using taxpayer money to underwrite a massive expansion of the domestic gas industry.

“During the COVID-19 crisis, state and federal governments have worked together to try and ensure the safety of the Australian people. This was a rare moment of bipartisan collaboration, which was welcomed by the Australian people,” said Cam Walker, Friends of the Earth campaigns coordinator.

“Now, as we start to emerge from the lock down, the federal government is showing its true colours: it intends to do everything in its power to back up old and outdated fossil fuel technology at the expense of clean technology like renewables and storage.”

“Further, if this is the calibre of the work that will be produced by the manufacturing taskforce advising the COVID-19 Commission, it should be disbanded and a new set of experts appointed to such an important role.

Friends of the Earth say more fossil gas will worsen climate impacts such as the catastrophic bushfires of summer 2019/20.

Say no to Angus Taylor's plan for a gas led recovery!

“Last summer’s fires were a wake up call to Australians that climate change is already here. Climate science makes it abundantly clear that the time for new investment in fossil fuels is over,” said Walker.

“The argument that gas is a ‘transition’ fuel is at least 20 years out of date. Renewables and storage are cheaper than new build gas or coal fired power stations and offer huge export opportunities for Australia and many thousands of new jobs.

“Yet in spite of this, the federal Coalition keeps pushing dirty, outdated technology that drives climate change, makes people sick, and consumes scarce resources like water.

“The only logical interpretation of these actions is that the government has put its ideological commitment [to fossil fuels] over the interests of the Australian people.

“If these ideas were adopted by the federal government, they would lock us into decades of continued reliance on dangerous fossil fuels. It would be economically negligent because it would lock in potential public investment in a range of expensive stranded assets.

It does not consider alternatives to gas and does not mention climate change. It continues the narrative of trusting carbon capture and storage as a ‘get out of jail free’ card for dirty fossil fuels, in spite of the continued failure to deploy this technology at a commercial scale.

“Despite decades of research and $1.3bn of public funds, carbon capture and storage is still unproven as a secure, long-term method to stop climate pollution from entering the atmosphere.

And significantly, it mirrors the federal government plan to cut environmental regulations, described as “green and red tape”, to allow developments.

“The Australian community has worked for decades to ensure there are federal environmental laws that will protect the ecosystems that our society and economy rely upon from destructive developments. The federal government’s mantra that it wants to cut “green and red tape” is obvious code for “reducing environmental and workplace protections”. This ideological overreach will not be supported by the majority of Australians.

“The majority of Australians want to see green and sustainable stimulus packages to get us out of the economic downturn and avoid the threat of a recession. Sadly, all this report does is back Australia into a corner where we would invest public funds into dead end and dangerous technology. It represents a lack of vision and a failure of leadership.”