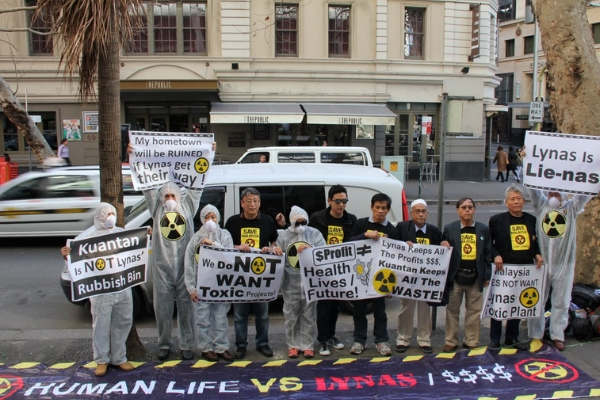 Friends of the Earth Australia and Stop Lynas Campaign Australia stand in solidarity with all Malaysians calling for Australian-owned rare earth miner Lynas Corporation to stop polluting Malaysia with its toxic radioactive waste and to start cleaning up the mess it has created.

We stand in solidarity with the peaceful mass movement across Malaysia that advocated for the Lynas Advanced Materials Plant (LAMP) to not be given an operating licence. Despite the lack of social licence it was approved by the previous controversial Najib-run Government - without a detailed Environmental Impact Assessment - when Lynas gave the undertaking to remove its radioactive waste from Malaysia in December 2012.

Toxic substances like thorium and uranium radionuclides, together with toxic heavy metals and arsenic, most of which are cancer-causing agents, are present in the ore of rare earth minerals. They are being left behind in the waste and effluent at the Lynas Advanced Materials Plant in Kuantan, Malaysia. There are also issues with the harsh reagent and corrosive acids used in the processing stages.

The Malaysian Government made a Ministerial Decision following an executive review on Lynas to enforce the licence condition that it would remove it radioactive waste from Malaysia. Lynas has yet to follow through with this condition. This is a gross violation of its corporate environmental and social responsibility.

Therefore, in solidarity with all Malaysian citizens we call on:

1. Lynas Coporration to clean up the toxic waste it has created at it Lynas Advanced Materials Plant in Malaysia;

2. The Australian government to legislate binding corporate regulation to prevent any further human rights or environmental violation of Australian corporations operations overseas; and

3. The Malaysian Government should not renew Lynas' permit in September this year while Lynas does not have a clear plan of how to deal safely and responsibly with the waste.