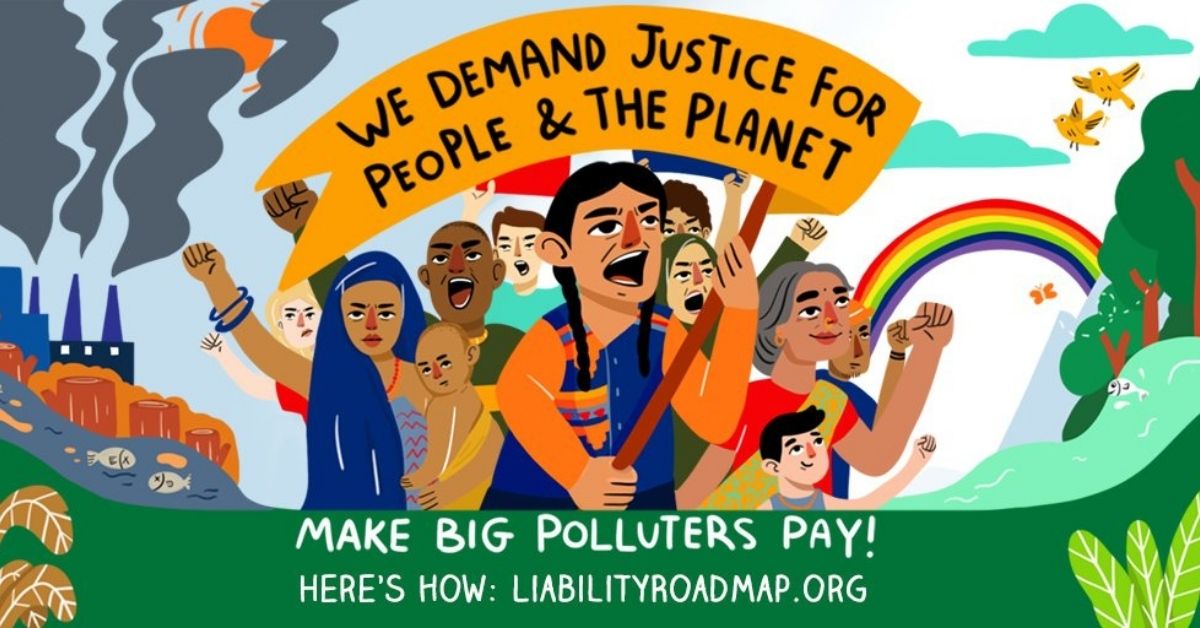 Friends of the Earth Australia has joined a global coalition to release a “liability roadmap”: a first-of-its-kind tool outlining how local to global decision makers, including government officials, can hold polluting industries liable for the climate damage they knowingly cause, while unlocking climate finance needed to address the climate crisis and implement solutions.

This roadmap, released just one week before UN climate week, is the next stage in the global campaign to Make Big Polluters Pay.

Last September, international climate organisations launched a global call for Big Polluter liability at the UN Secretary General’s Climate Action Summit in New York City. At COP25 in Madrid, the demands hundreds of thousands of people to make Big Polluters pay were delivered to government delegates. Organisations and signatories echoing this call hail from around 70 countries including Bolivia, The Philippines, and Nigeria.

“Big Polluters have wrecked our climate, ecosystems, lives and livelihoods, for too long. They manage to abdicate any responsibility, and only benefit from the damage they cause, which falls disproportionately on Global South communities, Indigenous Peoples, people of colour, women, workers, farmers, peasants and low-income communities. The Liability Roadmap is a tool we can use to call to account those who have knowingly caused the climate crisis, and make them pay. Not only that, it lays the foundations for systemic change - reducing corporate power and ensuring resources for the much-needed just transformation,”

Liability has taken on new importance amid the COVID-19 pandemic and unprecedented climate disasters. Many Big Polluters are in large part responsible for the multi-faceted crises people are facing and are still attempting to profit from fuelling it – demanding government bailouts and rolling out PR schemes that position themselves as solutions.

"The liability roadmap is about more than lawsuits and courtrooms. This is about making Big Polluters pay for the havoc they’ve wreaked by fuelling the climate crisis and about forcing them to end their abuses. This is about making Big Polluters pay for causing decades of suffering and destruction in communities on the global frontlines of the climate crisis, with no end in sight. The roadmap will carry us further down the road where Big Polluters are forced to put people’s well-being and the well-being of the Earth and its ecosystems above expansion, extraction, and profit making,”

Fossil fuel and other polluting industry liability is a growing area of focus for climate experts, activists, academics and governments alike as the industry’s long history of denial and the link between industry emissions and climate impacts becomes more evidenced. From U.S. states to Vanuatu to Peru, elected officials and people are exploring holding polluters like the fossil fuel industry liable for its long history of deceit and environmental destruction.

“The launch of the liability roadmap is timely. It presents an opportunity and pathway that African governments must seize to finally hold polluting industries accountable for the environmental and human rights abuses they have caused in communities across Africa and the world over,”

Earlier this year, the expansion of Heathrow Airport was successfully stopped after civil society argued it was a violation of the UK government’s Paris Agreement commitments. The Philippines’ commission on human rights has concluded that the fossil fuel industry can be held legally responsible for their role in climate change. Indian fisherman challenging the International Finance Corporation (IFC) secured a precedent-setting judgement in the U.S. Supreme Court in 2019.

"This is a global issue. Here in Australia many resource companies have acted with impunity for decades. The recent destruction of ancient sites in the Juukan Gorge in Western Australia by mining giant Rio Tinto highlights the scale of this problem. Around the world communities are standing up against corporate abuse and the liability roadmap will provide tools to allow them to hold corporates to account."

“EnergyAustralia and handful of corporations are responsible for greenhouse gas emissions in Victoria’s energy sector. The ‘Liability Roadmap’ provides options for the state government to hold big polluters to account for the climate damage they cause. Governments who are serious about protecting communities from intensifying impacts and climate justice will take a look at the roadmap and take action.”

It is time to Make Big Polluters Pay! Get involved in the campaign: