Book Review: Marx and the Earth: An anti-critique 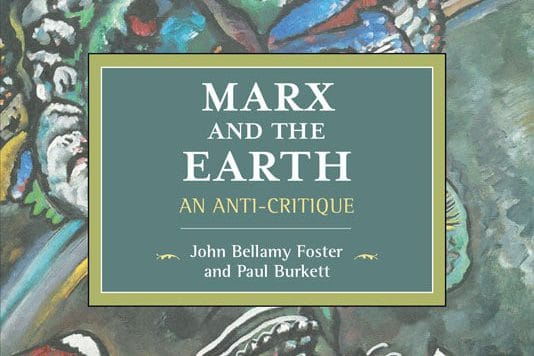 Marx and the Earth is a righteously good read and indispensable for any politically and socio-economically literate environmentalist or Socialist.

Marx and the Earth: An anti-critique

If there is one thing from which green thinking and practice suffers, it is the lack of an over-arching historical and socioeconomic conceptualisation of the dynamics making for the trashing of the environment as habitat for humans and other creatures.

It is one of the ironies of history itself that this is an unnecessary weakness of the environmental movement. An eminently suitable analysis has been available for over 150 years: the historical materialism of Karl Marx. Indeed, Marx's philosophy, precisely because it is materialistic in the cosmological rather than the ethical or pecuniary sense, maintaining as it does that there is no such thing as spirit and that the universe is constituted wholly by matter, perfectly integrates concern for nature and humanity.

Marx believed that the current historical epoch must end in either socialism or barbarism, which is to say, the democratic governance of production and commerce by associated producers, or socioeconomic and ecological collapse. This choice was inevitable because of the tendency of unrestrained commodity production for profit under capitalism to subordinate all other considerations, including the very survival of the human race and all other species.

It was axiomatic in Marx's critique of political economy, the semi-scientific 19th century apologetics for the rise of capitalism, that capitalism would seek to expand beyond all material natural limits, including those posed by critical non-renewable energy sources. This is hardly surprising. Marx was alert to the science of his day. He attended in 1859 in London John Tyndall's experimental demonstration of the role of carbon dioxide in generating local greenhouse effects. His adopted city of exile's pollution problem was by then a couple of centuries old: the asthmatic Whig philosopher John Locke could barely breathe in London at the end of the 17th century. Even in his own day, nearly two centuries later and two centuries ago, Marx fully understood that capitalism was costing the earth. He found instructive contemporary issues like soil degradation, deforestation, regional climate change, biodiversity loss, natural resource depletion and pollution, not to mention the exploitation of human labour.

In an extensive introduction to Marx and the Earth: An anti-critique, authors Paul Burkett and John Bellamy Foster discuss these issues in the context of rejecting the complaints of self-styled 'eco-socialists' that classical Marxism, the Marxism of Marx, is somehow too dated or inadequate to address environmental concerns. There has always been a tendency in various quarters to reconstruct the wheel regarding Marx, as if he were not an intellectual giant on whose shoulders we all stand. Thus, the notion of 'eco-socialism' is in fact redundant, as classical socialism always embodied an ecological perspective. 'Eco-socialism' is thus really 'eco-eco-socialism', something of a fallacy of infinite regress.

Moreover 'eco-socialism' has patronised the working class, the bulk of the 99%, by carrying the coal of ecological awareness to the Newcastle of their class consciousness. This superiority complex is one reason Greens generally have yet to build upon widespread public sentiment and politically awaken the majority of society to a living sense of enlightened self-interest. This is to an extent an expression of the movement's non-proletarian social base. Marx on the other hand was alert to the ecological issues of his own day. He was interested in the natural history of climate change and other prehistorical topics. He cannot accordingly be dismissed as narrowly economic or anthropocentric.

While he could not have foreseen in contemporary particulars today's planetary peril, any more than he could have predicted the actual ferocity of the Great War on the basis of the increasingly fierce wars of his lifetime, the concept of barbarism shows that he did intuit them. 'Barbarism' for Marx was the secular, socioeconomic and ecological equivalent of the Christian Apocalypse, with all its four horses. The practical point of appreciating classical socialism is not to cleave to allegedly 'sacred' Marxist scriptures. It is to enjoy the twin benefits of historical materialism and naturalism. These include primarily the integration of historical socioeconomic and ecological perspectives denying capitalism's alienating dismissal of real environmental considerations as 'externalities' to narrowly understood 'economic' factors.

What is true is that 21st century socialism must be more ecological than ever. While in so far as it is a philosophy, Marxism is too broad and profound to be reduced without vulgarisation to be the platform and dogma of a political party, the Greens had best be content to be a party with socialists in it. The Four Pillars of the Australian Greens with their subsidiary receptiveness to social justice concerns allow for this. But the ruling culture of the party is uneasy with such cohabitation within doors by 'watermelons', said by detractors to be 'Red on the inside and Green on the outside'. The recent successful campaign by party elder Bob Brown against Lee Rhiannon and her NSW following demonstrates as much. It is a sign of relative political immaturity. It is a legacy of the Cold War and the successive neoliberal era, which was unconducive to systematic anti-capitalist environmentalism in 'the West'. This was particularly so given the poor ecological record of self-declared 'communist' polities, which induced confusion of Marxism with them and their environmental practices.

Much Green thinking and practice betrays a hankering to be quit of any need to criticise capitalism, as if it were possible to be coherently or politically ecological whilst avoiding any challenge to it. This goes beyond any politic reluctance to adopt any language which might be misunderstood deliberately or involuntarily and scare the horses. Ultimately, we can have capitalism or we can have the environment, but we cannot have both. Certainly, much can and should be done ecologically without holding our breath and simply waiting for the revolution. But little can be achieved if we are frightened of our shadow within the framework of liberal democracy, without pushing the socioeconomic envelope.

History is not over as Fukuyama mistakenly contended, and Margaret Thatcher was wrong to claim that There Is No Alternative to capitalism. We must keep our options open if we are to effectively prioritise measures to transcend the risks of ecological crisis. Accordingly, the mainstream Neo-malthusian liberal Green movement suffers from a lack of insight into the political economy of capitalist growth, and thus of a critique of a system which is systematically trashing planet Earth. Yet Marxists like Paul Sweezy wrote as early as 1974 that instead of a universal panacea it turns out that growth itself is part of the disease.

But Greens still labour to understand that it is the capitalist nature of growth in commodity production which is the problem, rather than growth as such. There will always be a need for growth in public services like health, education and welfare, provided their ecological footprint is managed. Deploring the contempt for and degradation of nature under 'the regime of property', Marx believed in developing human and natural potentials and placing them at the service of a just, sustainable society. Don't Socialists and environmentalists ultimately believe in the same thing? Doesn't mass-Murdoch fear precisely this natural fusion? The vitalistic, romantic and spiritual tendencies of much Green thinking, particularly 'deep Green' mystical idealism, perversely perpetuate the dualistic divorce of humanity and nature under capitalism. They prevent the cross-fertilisation of Socialist and Green thinking, with deleterious effects including the arrest of both movements and their mutual cannibalisation.

Marx's important ecological critique, based on the work of the German soil scientist Liebig, of the metabolic rift involved in capitalist agricultural cash cropping was embodied in the 1848 Communist Manifesto, wherein Marx called for urban decentralisation and the socioeconomic resolution of the contradiction between town and country. Private, particularly absentee property in land, was to be transcended by a democratic society of associated producers. This required conscious, rational, scientific treatment of the land as permanent communal property and the inalienable condition for the existence and reproduction of the chain of human generations.

This concept approaches a highly evolved revisitation of so called 'primitive communism', the political economy of land tenure typical of many ancient and traditional indigenous societies, including the Australian Aboriginal nations. On this basis, agricultural production needed to be carried out by small proprietors or collective farms. Marx was not the patronising disdainer of the peasantry he is often mistaken for. He appreciated the sustainability of small holdings and collective tenures. As mentioned above, there were ecological problems in Marx's own day which enabled him to understand the metabolic rift between capitalism and the environment. Marx consistently emphasised the fundamental contradiction between the socioeconomic metabolism of capital and the universal metabolism of nature. For Marx, science required the transcendence of the capitalist alienation of nature and from nature, i.e. the estrangement of humanity from the full range of life's diversity on the planet.

The bulk of the book is taken up with developing in detail the introduction's anti-critique of 'eco-socialism' in defense of 'Marx's ecology' (the title of a previous Bellamy Foster study). Topics made out in full include the ecological materialism of Marx; the origins of ecological economics; classical Marxism and energetics, embracing the place in Marxist thinking of thermodynamics and entropy; socioeconomics and the metabolic restoration of an open sustainable socioeconomic system.

Marx and the Earth is a righteously good read and indispensable for any politically and socioeconomically literate environmentalist or Socialist.

Published in Chain Reaction #133, September 2018. National magazine of Friends of the Earth Australia.