Media Freedom on the Frontline

A number of high profile arrests, raids and media suppression orders have hit journalists documenting environmental and human rights violations within Australia over the last couple of months. From arrests of French journalists documenting protests, to the recent ABC raids, the Australian clamp down on press freedom has been noted internationally. As always, the ability of the press to document on these important issues challenges the public's perception of government democracy and protection of rights. 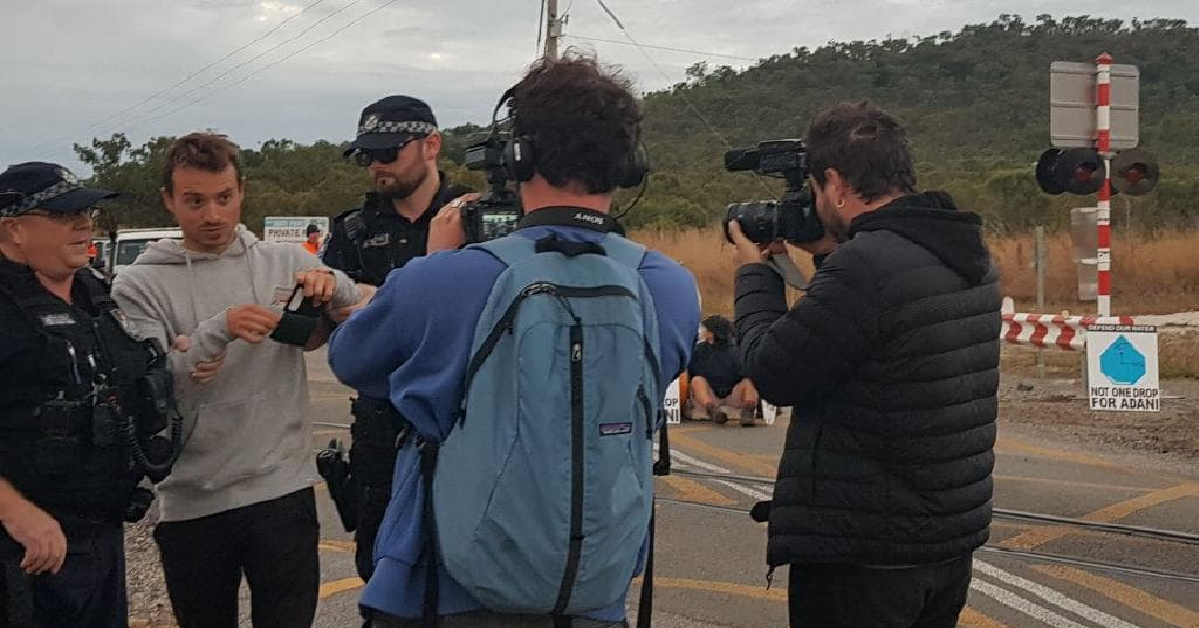 On the 22nd July, 4 French reporters were arrested while filming the blockade made at the Abbot Point coal terminal in Queensland. Among those arrested was Hugo Clement, who works for the French news channel France2 and is a national icon in France for his documenting of global and national environmental issues. A media storm ensued with Hugo himself claiming "it's a very weird thing for a democratic country [to impose]” as the journalists weren’t blocking the road and "I think Adani is a big news topic here so it's not illegal to talk about it. Maybe it is." Clement and his film crew had been previously filming off the Great Barrier Reef for a new documentary titled On the Front. Bail conditions for this arrest have been questioned as their primary requirement to ensure plaintiffs attend their court hearing has been overshadowed by the protection of industry agendas. Queensland Court of Civil Justice has deemed the conditions “an abuse of police power” and “entirely inappropriate”.

The arrests made on Hugo Clement and his film crew at Adani were targeted to the media and go further than protecting the property of the Carmichael mine. This year Australia has fallen in the World Press Freedom Index of Reporters without Borders, an organisation that reviews and reports on the current state of media freedom across 180 countries. Down 2 places to 21/180 it has fallen below Surinam and Uruguay due, in part, to changes in legislation and defamation claims since 2018. A recent interview with the UN rapporteur on media freedom, David Kaye stated the same; that Australia had gone further than other democratic countries to limit basic protection for journalists and the media. Other countries compared include the United States, where political pressure and attacks on journalists are increasingly frequent and threatening. This comes after the AFP raids on ABC Headquarters back in June, where the Australian police took to searching and gathering evidence linked to the Afghan Files report published by ABC back in July 2017. The freedom of the press to publish documents on the overseas actions of the Australian defence force is important, not only to the media but for the public to effectively scrutinise the government.

Arrests fall under one of many methods to suppress the media in Australia. Already mentioned include strong defamation laws and federal security laws, but increasingly court suppression orders. The state of Victoria last year issued more than half of the total suppression orders across the whole of Australia, at 443. Court suppression orders, in a world of borderless digital media, limit the ability of the Australian media to inform the public of important court proceedings but allow the international media to spread the news via social media and news outlets. This undermines journalism within Australia and weakens the public reliance on national newspapers and articles.

Additionally, stronger legislation has been passed to prevent environmental activism on farms and abattoirs that have increased over the last 18 months. Trespassing laws, including “use of the internet to incite people to enter farms illegally” have been brought in with greater fines, surmounting $400,000 for groups or corporations, in NSW. The NSW government argues that the need for greater fines is based on threats to biosecurity in these farms. However, the laws come in conjunction with other legislation and increasingly strong anti-protest trends from the government, highlighting a wider stance on stronger legal action. Scott Morrison has mentioned that these laws in NSW precede the federal government’s own form of trespass laws to come in the following weeks. Calls by the opposition Liberal National party in Queensland argue the need for ‘industrial sabotage’ laws to prevent public protesting in opposition to environmental injustice such as the Carmichael coal field. These worrying trends form a picture of federal opinion on peaceful and democratic protesting and the desire of those in power to listen to the frustrations of the public. Lack of action on environmental issues is sure to acerbate tensions already rising amongst those who recognise the dangers of neglecting the very real consequences of environmental inaction.