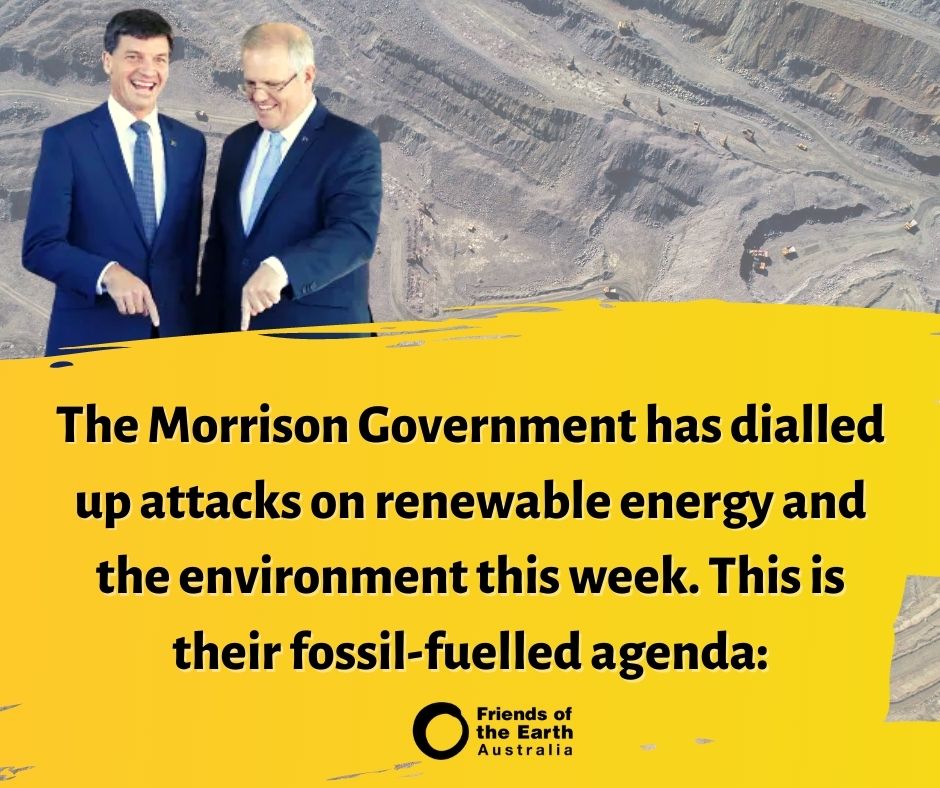 While we all grapple with the impacts of Covid-19, the Morrison government has used its first week back in Canberra to escalate attacks on the environment and renewable energy.

This is what the government has prioritised this week:

This is a brazen attack on the CEFC, Australia’s very own Green Bank, which plays a critical role financing wind and solar projects around the country, reducing emissions and creating regional jobs. The CEFC is currently prohibited from financing fossil fuels projects like coal and gas, a protection that must remain.

At a time of economic crisis, Scott Morrison and Angus Taylor should not be squandering public money meant for renewable energy to help out mates in the fossil fuels industries. Gas is a polluting fossil fuel, and driving the climate crisis. Not only is the sector dominated by tax-dodging multinational corporations, it is increasingly uneconomic, representing a potentially stranded asset. Any attempt to use public money to subsidise coal and gas is a waste that will only intensify the climate crisis. Putting public funds into potential stranded assets would make a mockery of Coalition claims that they are good economic managers.

At the same time, the government has quietly finalised a public grant of $3.6 million to coal company Shine Energy to conduct a feasibility study into a controversial coal plant proposal in Western Queensland. The grant was finalised prior to Labor and the Greens moving a disallowance motion, as lawyers at the Australian Conservation Foundation warned the grant could be illegal.

The government is waging a two-pronged attack on the national environment law, the Environment Protection and Biodiversity Act (EPBC) first established by John Howard.

From its creation, the EPBC has comprehensively failed to protect the environment from over development. However, the water trigger requires that attention be given to the impacts of mining on water. State and territory governments wanting to promote mining cannot be trusted to properly assess the impacts of mining.

It's clear the Morrison government doesn’t want coal and gas companies to face additional scrutiny.  By removing the water trigger, Morrison is putting the country’s precious water -- and the human right to access it -- at risk from polluting fossil fuel industries.

The independent review into the EPBC (the Samuel Review, p.52) states: “To be able to ensure community confidence in 'nuclear' activities, the Commonwealth should maintain the capacity to intervene.

The Prime Minister has already announced a joint ‘fast track’ Taskforce to prioritise and “accelerate” approvals to BHP’s uranium mine at Olympic Dam in South Australia, as one of fifteen selected priority EPBC Act major projects.

Cutting federal involvement in approvals, while encouraging further development of the nuclear industry would be a dangerous move for Australia.

Australia is facing an extinction crisis. Our environment is still reeling from last summer’s bushfires. Recently, the Federal Government introduced legislation to rewrite our national environment law (the EPBC). The government has ignored the interim findings from a statutory review of the EPBC Act. The final report is due in October and they should wait to see the final report before rushing into changes. Instead, they are pushing ahead with legislation that is almost identical to the 'One Stop Shop' legislation proposed by Tony Abbott back in 2014.

Now is not the time to rush through laws that will weaken our ability to protect the environment, or lock in our reliance on fossil fuels. But that is exactly what they are doing. Rushed decisions now in the name of a few more development jobs are not worth the long term, potentially irreversible impacts to our precious, unique animals and land.

The government is trying to shirk its responsibility to protect all threatened species under the EPBC Act, and instead want to pass this off to the states and territories. Morrison is doing this while also ruling out introducing an independent environment regulator, flying in the face of the government’s own expert advice.

Join our call for a strong, independent regulator to oversee strengthened national environment law as part of the EPBC review.