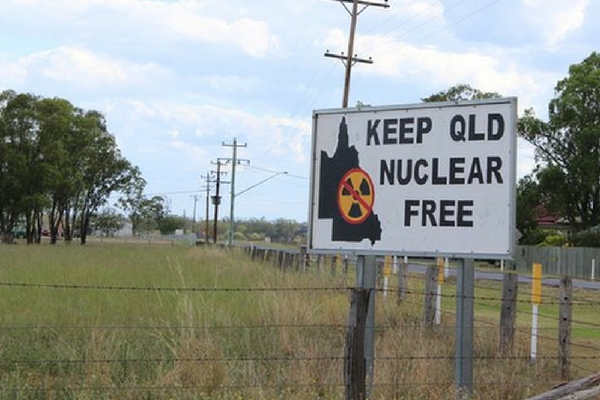 Friends of the Earth Brisbane

The Australian Nuclear Free Alliance and Friends of the Earth Brisbane will vigorously oppose the Federal Government’s siting of a national nuclear waste storage facility anywhere in Queensland.

The federal government has today released a short-list of six possible sites for a national nuclear waste repository, and one is in Queensland. The site, called Oman Ama, is 150 km inland from the Gold Coast.

“Aboriginal communities around Australia are reeling from this announcement,” states Adam Sharah, Co-Chair Australian Nuclear Free Alliance (ANFA).   “For the past 20 years, the Federal Government has attempted to dump its radioactive waste in remote communities, first in South Australia, then in NT.  In both cases, community opposition led to successful legal challenges to the projects.”

“We are concerned about the lack of consultation with Aboriginal communities, which are already under attack due to unconventional gas mining, coal proposals and the roll-back of Aboriginal heritage protections”.

“The Federal Government’s woes with its waste stem from its own flawed processes,” says Friends of the Earth spokesperson Robin Taubenfeld.  “Offering Qld, SA and NSW land owners and communities a pay-out to receive the nation’s unwanted waste is unacceptable.”

“An injection of up to $10 million in to communities agreeing to take the waste is a pittance for the 400 year life span of the proposed facility and site - and irrelevant in the face of the risks associated with the transport and long-term storage of radioactive waste,” Ms. Taubenfeld states.

“Queensland has a storage facility for its radioactive waste and there is no need for Queensland to take up the risks associated with storing national or international waste. The Queensland Nuclear Facilities Prohibition Act curtails further construction of nuclear facilities in our state and we will do what it takes to ensure that Canberra cannot override state legislation in order to impose a dump.”

"The federal government needs to go back to the drawing board and to thoroughly consider all options for radioactive waste management. That includes the option of ongoing waste storage at the Lucas Heights site, south of Sydney, which already houses 90% of waste in question,” Ms. Taubenfeld adds.

The Australian Nuclear Free Alliance and Friends of the Earth are concerned that hosting a national nuclear waste dump will open the door for vastly greater volumes of vastly more hazardous high-level nuclear waste from nuclear power reactors around the world.