Nifty Neville; Catch Him If You Can

This article was written for Chain Reaction magazine by John Merkyl. 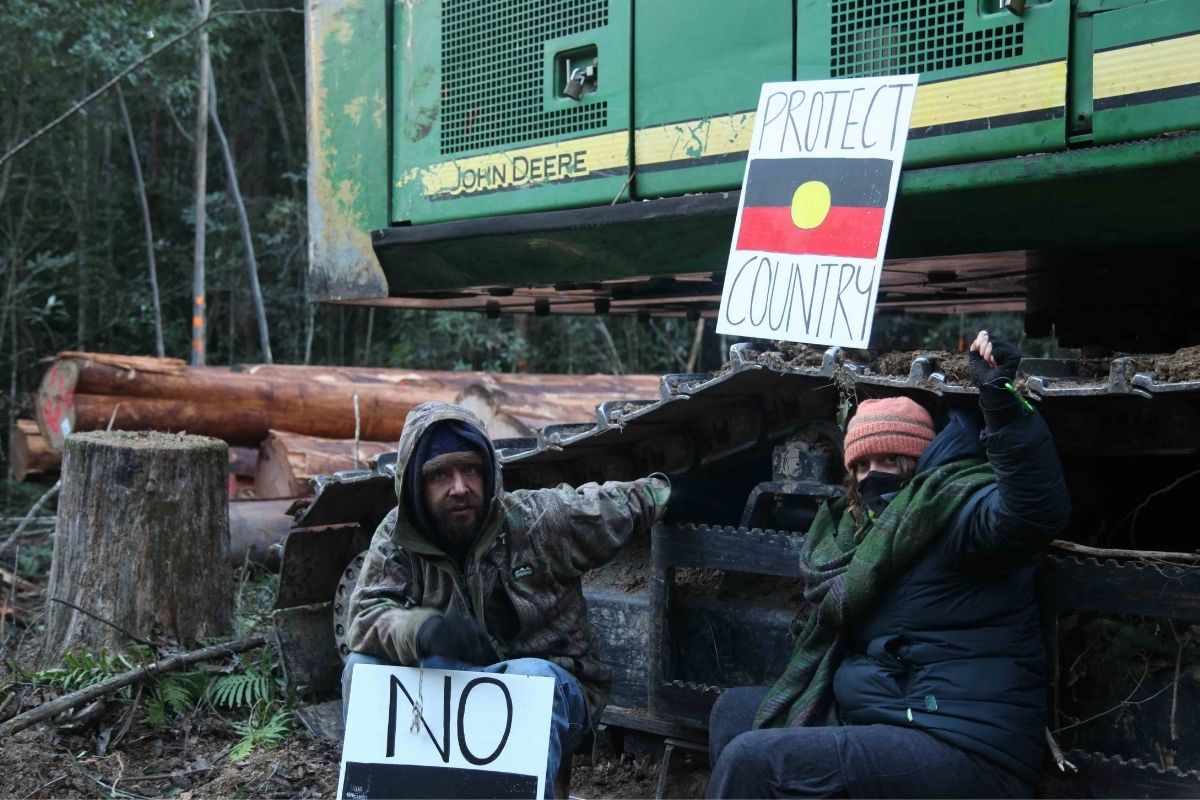 Nifty and Maddie stop work at Wild Cattle Creek in 2020

Wilkarr Kurikuta (aka Nifty), a Wangan Jagalingou Ngemba man from Northern Queensland, is sitting on a plastic chair on the edge of the Gumbaynggirr forest camp when I arrive for the evening yarning circle around the campfire. He tells me the cops came out and told him he’d be breaking bail if he went beyond that point, effectively excluding him from the fire and its conversations.

"I don’t care, brother. I’ll wait a while for it to get dark. If they come back, I’ll just do the wallaby. See if they can catch me."

He flashes a wicked smile, but the weary tone of his voice contains the patience of a lifetime of dealing with police who can be tetchy at best, and openly violent without consequence if they feel like it. Last week Nifty joined the Gumbaynggirr posse when they followed the logging contractors from Nambucca, three hours up into the New England, to Wild Cattle Creek, where they locked on to heavy machinery to stop a new intrusion into rainforest country. When he was cut free eight hours later, he was arrested for trespass.

They don’t tell me when I’m trespassing on Aboriginal Country.

They can say it if they want, but I don’t have to listen.

I looked up a map of Wild Cattle Creek, and saw it was north of where my brother lives in the high mountains, near Earth’s most ancient forests, which are called the Gondwana forests, and date back to when India and the southern continents were the one supercontinent, Gondwana.

I left Nifty to join the yarning circle, where the elders had invited a young tour guide - out of work, and in exile from the coronavirus in Victoria - to do the yarn. His subject was Terra Nullius, and with Wilkarr relegated to the outer, I sat uneasily through his talk about the colonial doctrine of an uninhabited land. White Australia is far too comfortable with seeing indigenous families on the fringes of everything we do – if we see them at all, and small mission towns like Nambucca have been amongst the worst. But here at the Gumbaynggirr camp, they’re right in the centre, where they should be, so I took a little comfort from that.

If I paint Wilkarr as an indigenous warrior, full of the soul of the forest, driven by the spirits of his ancestors, you might think I’m reaching for some version of a movie hero, but in a very candid way, without ego, he tells me that these are exactly the things that urge him on.

This is my responsibility to my ancestors. I listen for their voices, and this is what they tell me I gotta do. They speak to me when I’m here in the forest, and tell me to just keep on going.

I can relate to this. I’ve had many moments, especially when I was younger, when I’ve communed with the ghost of my father for advice on some stubborn hitch in my soul, but for Wilkarr it seems like there’s not just one, but a chorus of ancestral voices that swell inside him to point the way to his next action, with his parents and little sister always somewhere close by.

A few days before I arrived at the camp, Gumbaynggirr custodians had been trying to conduct a ceremony that would usher the spirits of the fallen trees out of the forest as they came past in their logging truck hearses, but the trucks wouldn’t slow down until Nifty put himself on the road to force their hand. The angry drivers nudged at his back, but he held tight, and blew out long notes on his didgeridoo - perhaps to his ancestors in the forest around him.

Whilst you are here, please make a tax deductible donation. Friends of the Earth relies on donations from people like you to keep running campaigns for social and environmental justice.
Donate now
Newry Forest Chain Reaction Gumbaynggirr