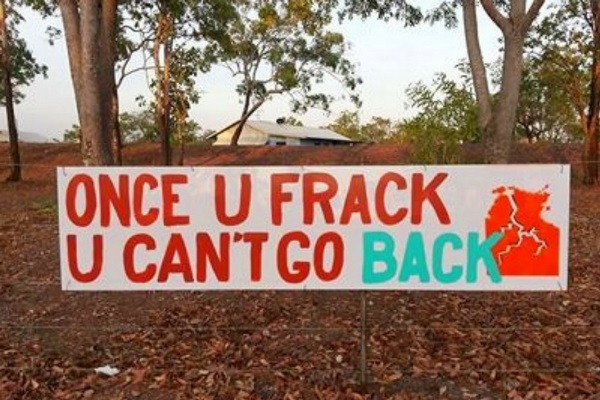 After the huge achievement of the #VicGasBan campaign that has seen the permanent ban of fracking in Victoria, Friends of the Earth Melbourne joined with Seed and Arid Land Environment Centre to hold an information night in relation the Northern Territory Gas Pipeline, the #NoNTPL campaign and how we could make this a national campaign.

In November 2015 China’s energy conglomerate Jemena - whose Australian headquarters are based in Melbourne -  was approved to build the Northern Territory Gas Pipeline by the former NT Chief Minister Adam Giles. Despite now being voted out of power, with concern about the pipeline being one of the leading causes for his fall in popularity, the pipeline is still due to go ahead in March 2017. The concerns raised by Territorians are not only in relation to the insidious effects that the exploration and production of gas has on the climate, but also the more immediate concerns in relation to water, land and health risks due to fracking for unconventional gas, like shale gas. Even the Institute for Energy Economics and Financial Analysis said that the $800 million gas pipeline planned for the Northern Territory is economically unviable, to the extent that it is described as the “whitest of white elephants”.

So what are the concerns with fracking and the pipe line? 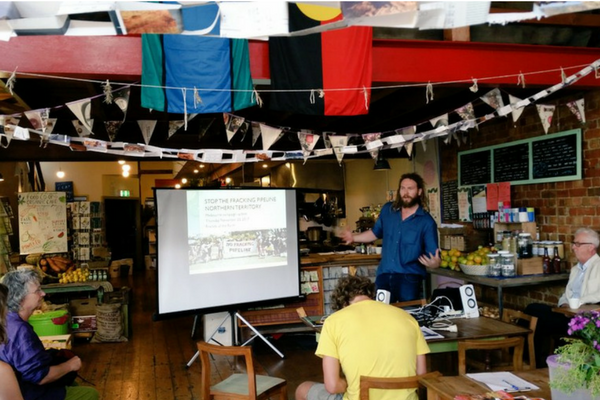 In December 2015 Australia became a signatory to the Paris Climate Agreement, with aims to stop global temperature rise at 1.5C - 2C. In order for the global community to achieve this, 80% of the world’s known fossil fuel sources need to stay in the ground. Many Tradiational Owners, Seed Mob, Lock the Gate, Arid Lands Environment Centre (ALEC) and other communities are strongly opposed to the Northern Territory Gas Pipeline due to the opportunities it would bring for further gas exploration and production - likely through fracking for unconventional gas potentially releasing a methane bomb that the climate just can't stand.

This concern is shared by the Traditional Owners of the land, who have expressed their opposition of the pipeline due to the destruction of land and the assistance the pipeline might provide to potential future fracking. Wakaya Traditional Owner Max Priest expresses his concern that, “If we say yes to the pipeline we would helping the fracking industry to expand across the whole Territory and damage not just our own but other mob’s country.” There is also the heightened risk of fires due to the construction of the pipeline, which could have detrimental effects on human and animal lives. The destruction of land is also a danger to threatened species such as the Bilby and insignificant biodiversity research has been conducted, particularly in relation to the Bilby’s. Surveys for the Bilby’s were only conducted in the months of April, May and June but given the 18 month time frame of construction, more seasonal research is required.

Information on how to object to fracking on their land is not being freely given to remote Aboriginal communities: @Riss_Bundjalung #NoNTPL pic.twitter.com/Uacq5Q8jQ1

Residents from the Northern Territory have repeatedly voiced their concerns about contamination of water, destruction of land and potential health risks, leading the newly elected Labor government to place a moratorium on fracking. The NT rely solely on their underground water supplies, the process of fracking not only uses enormous amounts of water, 20 million litres per ‘frack’, but also risks contaminating the clean underground water supplies with heavy metals, salts and gas. This has already occurred in the Pilliga in NSW where a “wastewater” holding pond leaked, contaminating two aquifers, one at 20m depth and the other 35m, with 4 stock and domestic bores within 5km of the deeper aquifer. The EPA Investigation report stated “that the salinity of the wastewater in the dam is almost as salty as seawater and that the shallower polluted aquifer is now extremely saline”.

A further concern from all residents is the potential health risks if the moratorium on fracking is removed. US research has shown a correlation between fracking and increases in infant deaths, birth defects, and low birth weights. Residents in the US living near fracking sites have complained of nosebleeds, dizziness and headaches.

While the pipeline does not guarantee that fracking will be permitted in NT it is still widely opposed. There is huge potential for solar and wind energy farms in NT, which would assist NT and Australia in fulfilling their climate commitments, is supported by residents, including Traditional Owners of the land, does not pose potential contamination of precious water supplies and does not pose potential health risks to residents.