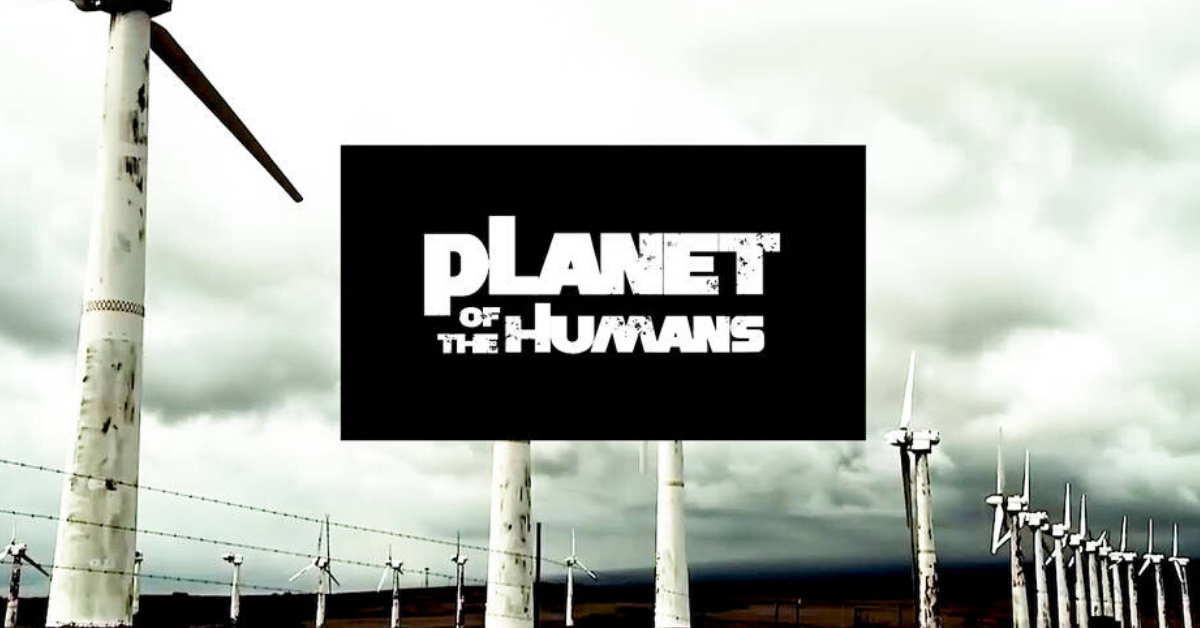 Michael Moore's new documentary, Planet of the Humans' (POTH) has been watched by millions, and has attracted an extraordinary amount of commentary, since it was made freely available in April.1
Jim Green discusses the weird world it presents in Nuclear Monitor #886.

Let's introduce the three anti-heroes responsible for this mess.

POTH executive producer Michael Moore needs no introduction, other than to note that he evidently knows very little about energy issues and appears to have been dragged along for the ride by his collaborators. "I assumed solar panels would last forever. I didn't know what went into the making of them," Moore told Reuters.2 That's two good reasons why he shouldn't be making documentaries about energy issues.

Jeff Gibbs is writer, director, producer and narrator of the film. Gibbs worked on a number of Moore's previous projects ‒ but in POTH he takes the lead. Gibbs insists that "everything you see in the film is accurate"3 even as dozens of articles detail its many inaccuracies.4-17 Joanne Doroshow, who worked as a researcher and fact-checker on a number of Moore's earlier projects, said that Gibbs was "someone we never let near the fact checking process" and "seemed attracted to conspiracy theories and information that was not factual".18 She continued: "I cannot speak to what happened to Michael's films after I stopped helping to ensure their accuracy but it is excruciating to see what has happened now".

Ozzie Zehner, another POTH producer and an interviewee, is introduced in the film as a 'visiting scholar' at UC Berkeley and Northwestern University.19 He ought to contribute some facts to counter Gibbs' conspiratorial muddle-headedness, but the two are as bad as each other. Zehner reminds me of Bjorn Lomborg ‒ an opportunistic self-promoter using contrarianism to grab the spotlight. His 'critical environmentalism'20 echoes Lomborg's 'skeptical environmentalism' and it echoes the 'death of environmentalism'21 that introduced Michael Shellenberger to the world as a self-promoting contrarian.22

"The film does not deny climate science. But it promotes the discredited myths that deniers have used for years to justify their position. It claims that environmentalism is a self-seeking scam, doing immense harm to the living world while enriching a group of con artists. This has long been the most effective means by which denial – most of which has been funded by the fossil fuel industry – has been spread."

"Everyone hates a scammer. And yes, there are scammers. There are real issues and real conflicts to be explored in seeking to prevent the collapse of our life support systems. But they are handled so clumsily and incoherently by this film that watching it is like seeing someone start a drunken brawl over a spilled pint, then lamping his friends when they try to restrain him. It stumbles so blindly into toxic issues that Moore, former champion of the underdog, unwittingly aligns himself with white supremacists and the extreme right.

"Occasionally, the film lands a punch on the right nose. It is right to attack the burning of trees to make electricity. But when the film's presenter and director, Jeff Gibbs, claims, "I found only one environmental leader willing to reject biomass and biofuels", he can't have been looking very far. Some people have been speaking out against them ever since they became a serious proposition (since 2004 in my case). Almost every environmental leader I know opposes the burning of fresh materials to generate power. …

"The film offers only one concrete solution to our predicament: the most toxic of all possible answers. "We really have got to start dealing with the issue of population … without seeing some sort of major die-off in population, there's no turning back."

"Yes, population growth does contribute to the pressures on the natural world. But while the global population is rising by 1% a year, consumption, until the pandemic, was rising at a steady 3%. High consumption is concentrated in countries where population growth is low. Where population growth is highest, consumption tends to be extremely low. Almost all the growth in numbers is in poor countries largely inhabited by black and brown people. When wealthy people, such as Moore and Gibbs, point to this issue without the necessary caveats, they are saying, in effect, "it's not Us consuming, it's Them breeding." It's not hard to see why the far right loves this film.

Even when the film-makers have a reasonable point to make, they mess it up. Promotional videos accompanying the film argue that people in the Global South should continue to develop their economies while those in developed countries need to sharply cut back. Fair enough, there's plenty of support among environmentalists for contraction-and-convergence approaches. But in POTH, the argument becomes so garbled as to be unrecognizable.

Likewise, the film-makers' argument that endless growth on a finite planet is impossible ought not be objectionable: it ought to be the starting point for any serious discussion about environmental sustainability. But in their clumsy hands, the argument trails off into muddle-headed, objectionable Malthusianism.

By all means discuss problems associated with renewables, but how on earth does this cryptic statement by Gibbs in POTH add to the sum of human knowledge: "It was becoming clear that what we have been calling green, renewable energy and industrial civilization are one and the same."

Gibbs ties the threads of his arguments together at the end of the film, but again it's a jumble: "We humans must accept that infinite growth on a human planet is suicide. We must accept that our human presence is already far beyond sustainability and all that that implies. We must take control of our environmental movement and our future from billionaires and their permanent war on planet Earth. They are not our friends. Less must be the new more. And instead of climate change, we must at long last accept that it's not the carbon dioxide molecule that's destroying the planet, it's us. It's not one thing, but everything we humans are doing ‒ a human-caused apocalypse. If we get ourselves under control, all things are possible, and if we don't …"

The far-right are falling over themselves to promote the film.23 "Left-wing greenies turn on Michael Moore. Give him a medal," a Murdoch tabloid columnist wrote, congratulating the film for "exposing the massive lies behind renewable energy".24

Breitbart described POTH as" the most powerful, brutally honest and important documentary" of Moore's career and argued that it could help get Trump re-elected by undermining proposals for a Green New Deal.25

"Michael Moore … has defended the film, saying it is intended to be a warning about the involvement of corporate America in the environmental movement. But that isn't the message taken home by many who have watched it. Corporate fossil fuel-backed groups such as the libertarian Heartland Institute have boosted the film, and far-right politics blog Breitbart, backed by Trump backer and climate skeptic Robert Mercer, has said the film shows renewable energy is more polluting than fossil fuels. Far from taking a chunk out of corporate America, Planet of the Humans has been turned into a cudgel by big oil and the super rich."

POTH doesn't discuss nuclear power, but that hasn't stopped nuclear advocates from endorsing the film's attack on renewables and using that as a launching pad for nuclear boosterism.26-29

Moore is friends with (and was mentored by) film-maker Robert Stone, who produced the wildly inaccurate pro-nuclear film Pandora's Promise.30-31 They both spoke at a screening of Pandora's Promise in 2013, with Moore saying he hadn't made up his mind about nuclear power.32

POTH feels like a set-up. A pro-nuclear sequel to the anti-renewables film, perhaps? But there won't be a sequel. For starters, the film-makers couldn't find a distributor for POTH ‒ that's why it was dumped on youtube. And in any case, the film-makers expressed skepticism and opposition to nuclear power in a recent online forum.33

Michael Shellenberger has enthusiastically promoted POTH, saying that it exposes "why renewables are worse for environment than fossil fuels"34 and using the anti-renewables diatribe to promote nuclear power.29

Ted Nordhaus, a nuclear power advocate who collaborated with Shellenberger on the 'death of environmentalism' in the mid-2000s, criticized Shellenberger and some others for being "so single-mindedly pro-nuclear and anti-renewables that they have cheered the movie's cherry-picking, exaggerations, and conspiracies while largely excusing its deep Malthusianism."35

Shellenberger has become a favorite of the far-right and the climate science deniers. He was interviewed by Tucker Carlson on Fox TV last year, attacking renewables and in particular the 'green new deal'.36 Recently Shellenberger was interviewed by Andrew Bolt ‒ Australia's version of Tucker Carlson ‒ to promote POTH and to promote nuclear power.37

Shellenberger's forthcoming book suggests his lurch to the anti-environment right is almost complete. The Harper Collins website provides this description of the book:38

"The risk of Earth warming to very high temperatures is increasingly unlikely thanks to slowing population growth and abundant natural gas. Curiously, the people who are the most alarmist about the problems also tend to oppose the obvious solutions. What's really behind the rise of apocalyptic environmentalism? There are powerful financial interests. There are desires for status and power. But most of all there is a desire among supposedly secular people for transcendence. This spiritual impulse can be natural and healthy. But in preaching fear without love, and guilt without redemption, the new religion is failing to satisfy our deepest psychological and existential needs."

So climate change isn't such a problem, and those who think it is should support nuclear power (and gas!) … but they don't for quasi-religious reasons. Where have we heard that before? That's right ‒ from Carlson, Bolt and the rest of the far-right.

Zehner makes the case for fossil fuels in POTH, when discussing a solar power plant: "The whole thing is built using fossil fuel infrastructure … You use more fossil fuels to do this than you're getting benefit from. You would have been better off just burning the fossil fuels in the first place instead of playing pretend."

One last observation about this weird world of renewable energy haters ‒ their extraordinary ability to turn on a dime and to contradict themselves. Jeff Gibbs said in an interview: "We don't attack any environmental leaders."39 But in POTH he says: "Environmentalists are no longer resisting those with the profit motive, but collaborating with them. The merger of environmentalism and capitalism is now complete." And this: "What are they [environmental leaders] hiding and why are they hiding it? Is it their ignorance, or is it something else? What if they themselves had become misguided? What if they had made some kind of deal they shouldn't have made and are leading us all of the cliff?"

Shannon Osaka noted in Grist that the second half of POTH is "a jumbled and garbled set of conspiracy theories relating to the Koch brothers, the Sierra Club, Al Gore, and other prominent environmentalists."40

Gibbs said in an interview that he doesn't believe in or argue for population control of any kind.39 But in POTH he says: "The reason we're not talking about overpopulation … is that would be bad for business." A handful of interviewees make similar comments, all of them handling a complicated topic with the subtlety of a sledgehammer.

Shellenberger told Tucker Carlson last year that one of the reasons people oppose nuclear power is that "they associate it with the bomb, which is wrong, they are two separate technologies."36 But in 2018 Shellenberger argued that "having a weapons option is often the most important factor in a state pursuing peaceful nuclear energy" and that "at least 20 nations sought nuclear power at least in part to give themselves the option of creating a nuclear weapon".41