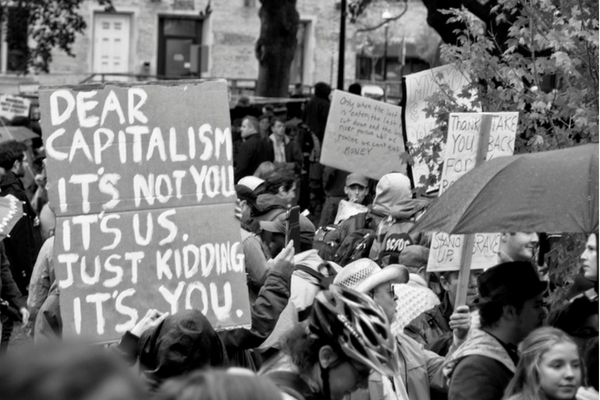 For many environmentalists, the "New Economy" is (mis)understood to be simply an economy that has transitioned away from fossil fuels to a renewable energy powered economy. The reality is that there's not necessarily all that much postcapitalist about a mainstream green post-carbon economic vision.

Indeed postcapitalism, such as it is framed by (for example) Paul Mason in his 2015 book PostCapitalism: A Guide to our Future appears to be a framework that many eco-warriors are not even aware of let alone consciously aspiring towards.

"Many different movements have emerged around the world focused on the concept of a 'New Economy'. Although they use different labels, such as the Social Economy, Solidarity Economy, Sharing Economy, Collaborative Economy, Steady State Economy and Community Economy, they all share two key goals: (i) to challenge the current dominant economic system, with its reliance on fossil fuels, large scale resource extraction and socially unjust structures and wealth distribution, and (ii) to create and strengthen economic systems that serve the needs of people in ways that are ecologically sustainable, socially just and culturally diverse."

From my point of view, foundational to the emergence of the most interesting aspects of postcapitalist, New Economy developments are the Commons and Peer-to-Peer (P2P) and their interrelation.

P2P theorist Michel Bauwens describes the Commons as "an idea and practice, that has emerged as a new social, political and economic dynamic" and P2P as a "relational dynamic based on the assumed equipotency of its participants, organized through the free cooperation of equals in view of the performance of a common task, for the creation of a common good, with forms of decision-making and autonomy that are widely distributed throughout the network."

This interrelation of the Commons and P2P has been termed by Yochai Benkler (Harvard University) as "commons-based-peer-production".

Examples of existing commons-based-peer production are probably most familiar in the digital realm. Think of time banks, peer-to-peer lending, open-source software platforms like Linux, Mozilla Firefox, Wikipedia, Wordpress, Arduino, Rasberry Pi, Wikihouse, and many other digital technologies that are not based on a profit-making motive but rather enable individuals to do and share things of value socially, outside of the market system.

But it's not just in the digital space, we have an emergent wave of commons-based-peer-production in the physical world also that Jeremy Rifkin calls the "Internet of Things". Open design communities are manufacturing in Fab Labs, makerspaces, and community workshops. Futurist Jose Ramos terms this "cosmo-localization" where we have the potential for localising production by drawing on open source global design commons for a wide variety of things including medicines, furniture, assistive devices, farm tools, machinery etc. These are produced locally using technologies such as 3D printers, CNC machines and low-tech crafts tools and appropriate technology.

We have the beginnings of a radically democratised new socioeconomic framework that enables increased capacity for innovation and resilience that prefigures new ecosystems for sustainable communities with solidarity that can be prototyped and defended politically at local and transnational scales. As Bauwens says "the new political agent of change is neither the proletariat nor the precariat, but the commoner, an empowered figure fit for the challenges of our times".

Sadly it appears that not enough environmentalists are aware of these exciting developments and we have instead a post-carbon economy being sold to us largely within the framework of "sustainable capitalism". Al Gore for example sells a "vision" that describes a green capitalism with capacity to "maximize long-term economic value by reforming markets to address real needs while integrating environmental, social and governance metrics throughout the decision-making process". Expressed more simply, his view is that the market has a critical role in saving us from environmental disaster.

Closer to home, Australian Greens leader Richard Di Natale's message to the "Left Renewal" Greens faction for them to "find a different political home" if they wanted an end to capitalism can only be interpreted as him being an adherent to a similar sustainable capitalist framework.

For Di Natale, Gore and their ilk, who knows whether it is a message aimed at not appearing too radical or whether for them it's truly easier to imagine the end of the world than the end of capitalism? No doubt this sentiment speaks to the despair in the hearts of many a stalwart environmental (and social justice) campaigner resigned to the ongoing abject failures of the left and not feeling there is anywhere else to turn.

And sadly, apart from this sustainable capitalist delusion, for many all we have is opposition. Urgent, necessary, critically-needed opposition. But where is our vision for a world beyond this opposition, beyond our current impasse? Where are our practical creative solutions in the here and now that will enable us to transition to a future that is environmentally sustainable, socially just and spiritually fulfilling? Where is the ideological and economic framework that will lift our vision, our hearts and our feet on a trajectory towards meaningful victory beyond a single campaign? What is our narrative?

For me, the most hopeful narrative emerging is that coming together of various threads I have touched on above which we can call postcapitalist. My belief is that authentic green movements have a critically important role to play in this new economic movement. None more so than grassroots groups such as Friends of the Earth with their track record of community organising.

In our campaigning, there are clear echoes in the way that we organise non-hierarchically, in our capacity to bring out the best in each other via Peer-to-Peer (P2P) governance processes and consensus decision-making. In our cooperative use of collaborative technologies and digital media platforms and tools. In our sharing of common resources. In our practice of open sourcing our knowledge through citizen journalism, citizen science, grassroots educational resources and processes. In our values that recognise our precious environment as a commons to be cherished and managed for the welfare of all living beings. In our solidarity with First Nations and oppressed peoples around the world and our capacity to engage with them and invite their leadership in non-tokenistic ways. In our recognition that capitalism isn't working.

All of these above are common skills and practices to grassroots environmental activists and New Economy / postcapitalist movements. Postcapitalism is not about inventing something new or imposing unrealistic utopias but is about building on existing movements, emerging successes and resilient ecosystems. It's about prefiguring, as much as is conceivable, the lives we want in the here and about maximising progressive utilisation of both ancient and modern, physical and non-physical, human and non-human potentialities.

The following is a brief excerpt from their website further explaining some of the fundamentals of New Economy movements:

New economy movements around the world share a similar set of principles that we hope will underpin the emerging 'New Economy Network Australia' (NENA):

Ecological Sustainability: That economic activity not only respects and operates within ecological limits, bioregional health and planetary boundaries, but also supports the regeneration of natural systems and recognises and upholds the inherent rights of nature.

Social Justice: That everyone can participate and benefit from economic activity in inclusive and equitable ways and that this requires working in solidarity to address the historical and ongoing marginalisation of certain groups by racism, imperialism, classism, patriarchy and other systems of oppression.

Democracy: That economic decision-making is participatory, inclusive and transparent and emphasises collective stewardship and management of economic resources, activities and outcomes.

Karun Cowper is a member of Friends of the Earth Perth.