Process not postcode for nuclear waste 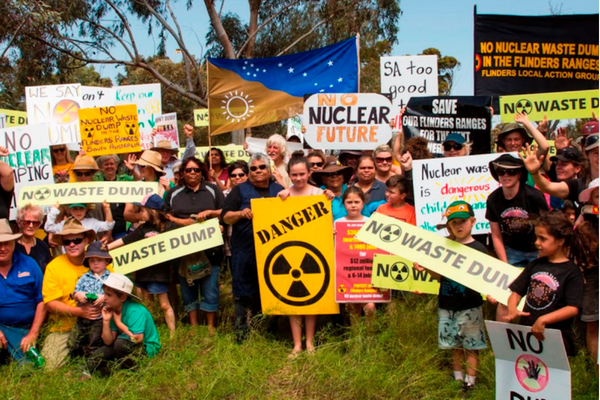 In a matter of months, South Australia could be the reluctant home to Australia's nuclear waste. Federal Resources Minister Matt Canavan is fast forwarding the process to approve a site for a national nuclear waste dump - he wants it done before the next election, putting politics before communities, cultural heritage and public safety.

TAKE ACTION: Send a message to the minister calling for a stop to this flawed process.

He has his sights set on either a site in the beautiful Flinders Ranges, immediately adjacent to an Adnyamathanha Indigenous Protected Area; or farming land near Kimba on the Eyre Peninsula. Most of nuclear waste comes from the Australian Nuclear Science and Technology Organisation, an experimental nuclear reactor located south of Sydney.

The Minister has organised for community ballots to be held in August and September, involving people living in the affected regions. Many people with a legitimate interest in the issue are being disenfranchised, including Traditional Owners. Barngala Traditional Owners have applied for an urgent Supreme Court injunction to halt the vote in the Kimba region; they will argue that native title holders who live outside Kimba District Council boundaries should be entitled to vote.

A Senate Inquiry has just released its report into the proposed nuclear dump. Even the major parties acknowledge that the government's 'indigenous engagement strategy' has not 'conformed to best practice'. Senator Rex Patrick from the Centre Alliance (the former Nick Xenophon Party) calls the government's handling of the issue "flawed and disingenuous" while the Australian Greens call it "fundamentally flawed".

Send a message to the minister now!

The Minister is ignoring widespread opposition among affected communities including Traditional Owners, he is ignoring SA legislation banning the imposition of nuclear waste dumps, and he is ignoring surveys demonstrating majority opposition across SA to his nuclear dump plan.

Traditional Owner groups have maintained strong opposition to a dump on Aboriginal land and the impacts on areas of cultural and historical significance. A dump in either location would also impact local farmers and tourism operators, who rely on a healthy environment for survival.

Australia needs a process not a postcode to properly manage nuclear waste.

Please email Minister Matt Canavan and Shadow Minister Kim Carr calling for an end to the SA dump plans, and for the government to initiate a comprehensive, independent inquiry to address all options for the responsible long-term management of Australia's nuclear waste.

You can send the letter we have drafted, or edit our letter, or write your own!