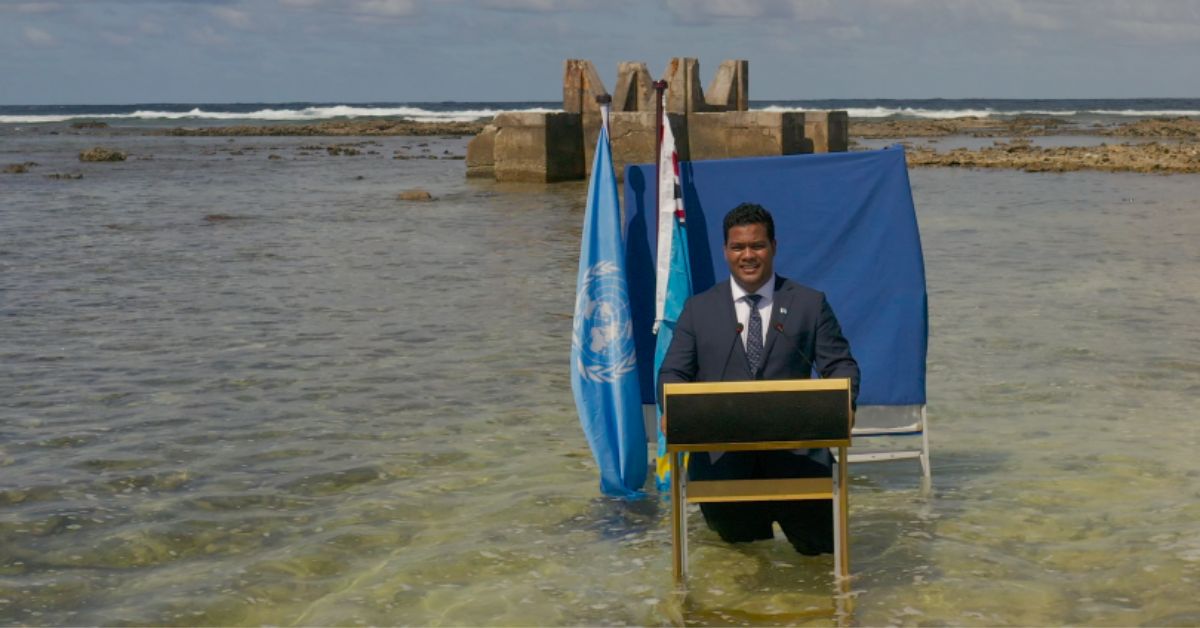 As a lawyer by profession, I’ll be focusing on legal issues and the legal implications of climate change on statehood and its relationship to maritime zones as we understand them - entitlements that states have under the United Nations Convention on the Law of the Sea (UNCLOS).  I’ll also briefly explain some of the initiatives that Tuvalu has undertaken to really strengthen our position at the national level, and regionally and internationally as well.

International law can be defined as the body of rules established by treaty or through custom that governs the relations of states existing within a very loose framework of laws. As we know, there are limitations to the enforcement of some of these rules and international treaties. We've seen many times countries withdrawing from treaties or refusing to follow certain agreements. But the important aspect of international law that I feel is an area where we can make a very positive contribution is that of customary international law. This is shaped by state practice, how states behave and is determined by looking at their laws and policies. It becomes customary in international law when that particular practice becomes widespread across many nations. I feel that this is an area in which Tuvalu can make a contribution to other countries that share a common interest.

It’s about developing state practice of looking at our laws, looking at our policies, looking at agreements that we're entering into and really arguing for the proposition of permanent statehood. These things really need to be reflected at the national level and we've been encouraging the Pacific Island countries in general to take this up.

In other words, we don't need to wait until nations outside the Pacific begin to recognise and support this notion. We can make a start by passing laws and creating policies ourselves that really reflect the positions that I’m highlighting here.

Our government now insists that all countries forming relations with Tuvalu recognise the statehood of the nation as permanent and its existing maritime boundaries as set, even if Tuvalu loses its land territory due to sea level rise.

This is a very important policy and not only for Tuvalu. When you get other countries to recognize this, it contributes to the widespread adoption of these principles and concepts. We've actually also developed joint communication standardisation to ensure that these principles are reflected, including within our foreign policy.

Our constitution is presently under review and one important aspect we're looking at is the definition of our territory. The existing provisions of the constitution contain very broad coordinates of what constitutes the territory of Tuvalu. Under UNCLOS, countries are entitled to maritime zones that are measured from baselines and we're entitled to a territorial sea area up to 12 nautical miles and an exclusive economic zone up to 200 nautical miles.  These maritime zones are measured from a baseline of the low water mark at low tide. However, the legal challenge posed by this definition is that, with sea level rising as a result of climate change, the low water line shifts over time.

The proposed text change for Tuvalu’s constitution is that the baseline coordinates declared under the maritime zones act shall remain unchanged, notwithstanding any regression of the low water mark and unless otherwise prescribed by an act of parliament.

As a first step, we have to ensure that our national law is reflective of the proposition that we're pushing on the international stage which also removes a sense of waiting for other states to come on board.  Moreover, it really puts the onus on us as Pacific nations to be more proactive. The more nation states we can convince to adopt this approach the more we are contributing to the formation of customary international law that would really support and cater to Tuvalu’s situation.

Hon Simon Kofe is Tuvalu’s Minister for Justice, Communication & Foreign Affairs. He began the Climate Frontlines webinar session “Legal and Political Discussion: What rights to cultural identity and sovereignty need to be protected?  What guarantees are needed for these rights to be ensured?” . Thanks to Madeleine Hohenhaus for this edited transcription.

While standing in the ocean off Tuvalu, Hon Kofe issued a statement to those gathered at COP26: