Protest Against Continued Destruction of Sacred Aboriginal Lands and Culture

Friends of the Earth Perth, School Strike 4 Climate and aligned environmental groups will be rallying in solidarity with First Nations people to demand that mining companies stop destroying Aboriginal cultural sites, and that better protections for cultural sites are put into place. For too long have mining and fossil fuel corporations wreaked havoc on the climate and cultural sites - and it needs to stop. 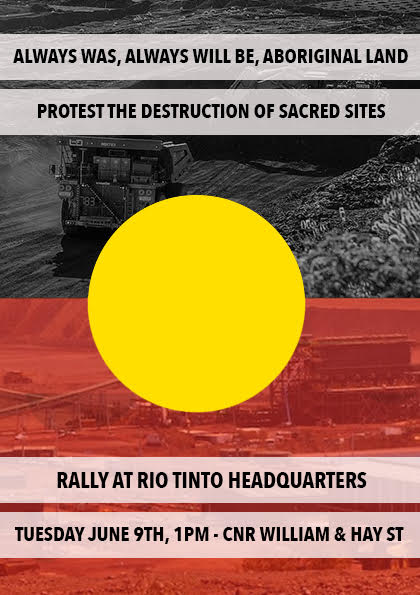 The recent Rio Tinto blasts destroyed the site of the Puutu Kunti Kurrama and Pinikura people of the Pilbara, an inland cave that showed continued human occupation through the last Ice Age. Artifacts show that Aboriginal people first occupied this site more than 46,000 years ago. On Sunday May 24 2020, explosives were detonated by Rio Tinto - destroying a sacred site with cultural significance to not just traditional custodians, but for humanity across the world.
Dumbartung Aboriginal Corporation is holding a protest against the continued destruction of Aboriginal sacred lands and culture by Industrialists and Mining Companies, and we should all stand in solidarity and support. The rally will occur outside the Perth headquarters of Rio Tinto.

Overwhelmingly, these events are cause for international outcry and concern. Far too many indigenous people face destruction of their sacred lands, and it is the responsibility of all people regardless of faith and creed to protect the earth for all future generations.