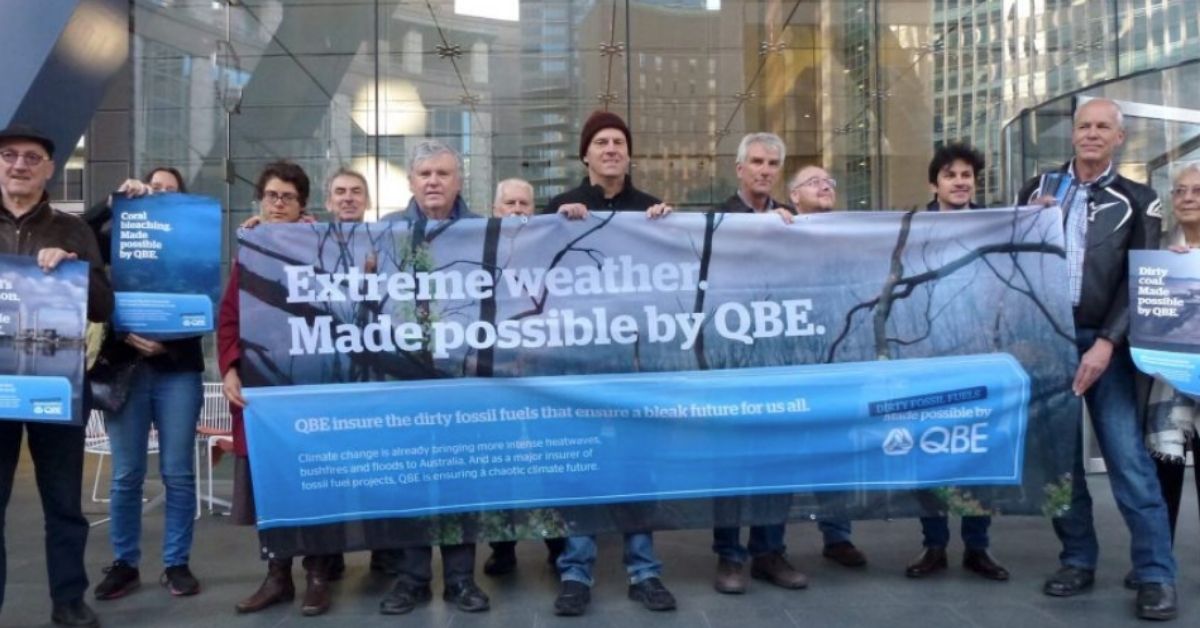 Together with the announcement of a massive A$2b loss due in part to ever-worsening extreme weather, fuelled by the burning of oil and gas, QBE’s updated Environmental and Social Risk Framework, released today, includes oil and gas targets which ignore the urgency of the climate crisis and are out of line with the Paris Agreement goal of keeping warming to 1.5 degrees.

In short, QBE will stop insuring new tar sands projects from 2022, but will allow business as usual in the rest of its oil and gas underwriting and investing until 2030 at the earliest. Then, from 2030 onward, it will assess whether its oil and gas company customers are aligned with the Paris Agreement and stop insuring those that are not. Yes, you read that right, it will assess, for the first time, Paris alignment of its oil and gas customers in nine years time. That’s fifteen years after the Paris Agreement was signed.

Take Action: Call on QBE to end its support for new oil and gas projects now, not in decades time.

No information is given as to how Paris alignment will be assessed, but here’s some free advice for QBE: if oil and gas companies are supported to continue business as usual for the next nine years, as QBE intends to do, they will not be aligned with the Paris agreement in 2030.

It is disappointing to see QBE kicking the can down the road on climate action. Business as usual until 2030 will guarantee the failure of Paris. All companies undertaking or planning new oil and gas projects or expansions must be refused insurance now, as their activities are not consistent with keeping global warming below 1.5 degrees.

Leading research organisations and the UN have found that between 2020 and 2030, global oil, and gas production must decline annually by 4% and 3%, respectively, to be consistent with the Paris Agreement’s 1.5°C warming goal.

In August, 25 leading scientists at Australian universities and institutions wrote that “to meet the upper Paris goal, we must achieve net zero emissions by 2040-2050. This requires a rapid phase-out of existing fossil fuel infrastructure, leaving no room for expansion of the gas industry”.

Friends of the Earth member group, Market Forces, has coordinated a shareholder resolution calling on QBE to align its underwriting and investment practices with Paris. QBE’s business as usual approach to the most urgent crisis humanity has ever faced means this resolution is more important than ever and the resolution will be lodged in coming weeks.

Last month, QBE increased its catastrophe allowance for 2021 by 24% to US$685 million, up from US$550 million in 2020, after its catastrophe claims suffered a 62% increase (to US$688 million) on the year prior. According to the insurer, the increase was driven by extreme bushfires and storm activity in Australia, which was also “a major contributor to the global losses” suffered by the company. QBE’s continued support of the climate-wrecking oil and gas industry will do nothing to stop this hemorrhaging of money.