In compiling this edition, Chain Reaction asked activists to share their experiences of gender (in)justice and dismantling the patriarchy within the broader environment and social justice movement. Sarah Day shares her experiences in this Chain Reaction #140 article. 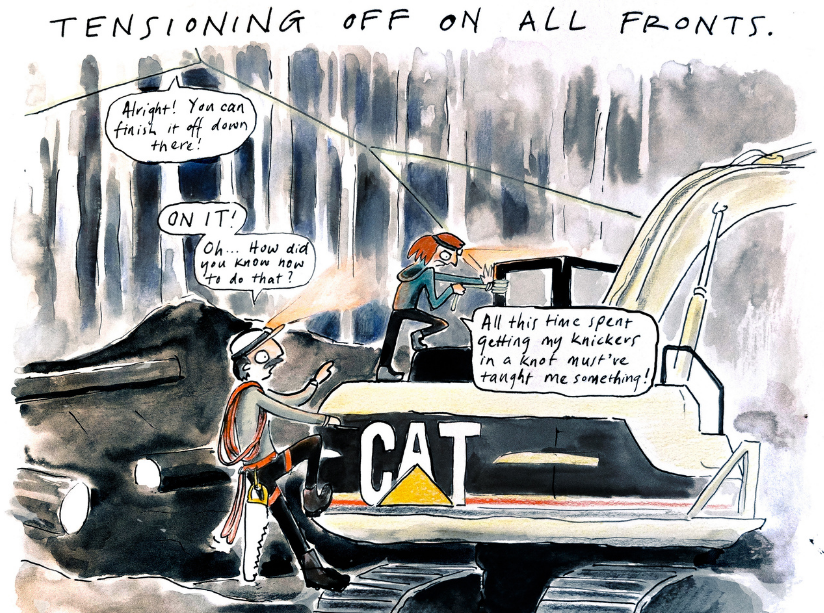 Just as I find it hard to talk about gender justice, it is hard to write about for several reasons. One is the knowledge that it will be impossible to convey the depth and breadth of the problem and be met with the serious response it deserves; the other is the discomfort of the despair and rage that begin to bubble up as soon as I turn my mind to the topic. I realise I keep a damper on this by choosing to walk away from many confrontations. This is also a choice for mental and sometimes physical safety.

I’m also aware that using binary language when trying to talk about gender justice can overlook gender diversity and the fact that many people are dealing with multiple forms of oppression. The experiences I describe here occurred between cis women – mainly myself, a not-straight white cis woman without a disability – and straight white cis men without a disability. I hope I don’t make anyone feel excluded with the following words.

And immediately what springs to mind are some memories that cause the fear of broaching this topic. For example, being in a meeting specifically convened to talk about gender justice with long term grassroots environmental and social justice campaigners who care deeply about justice and feeling like I was going to throw up when, as a woman was disclosing her sexual assault to the group, a man was laughing at something on his phone. No one said anything about it.

Another memory, of the last time I tried to have an in depth conversations with a long term campaigner about the gender roles being played out at a particular action. I had mentioned I’d wanted to talk about it in a text and received the reply that these were important concerns that he would like to discuss. Then nothing. When I saw him next and asked if we would discuss them he said he didn’t want to. I mentioned his text message and he said that he’d “only said that to keep the peace”.

Even writing these anonymous examples feels like some kind of betrayal. I am in awe of the bravery of people who call things out directly

The reason it feels so hard to talk about gender justice with straight white cis men is how your whole history of humiliation and harm is sitting there beside you while you try and explain why the latest horrible thing is not ok. This history seems to remain invisible no matter how many women disclose their experiences.

You are wide open to attack and in my experience, attack is the usual response, whether that’s anger, shaming, denial, joking, brushing off or pretending to care and then continuing to do the same thing. When the person you’re talking to is your ally against the injustice and damage taking place in the world, these responses can feel unbearable. So I rarely take the risk.

The invisible history I am talking about is growing up doing domestic chores and following a code of conduct my brother and dad were never asked to; being welcomed to teenage hood by being told I’m both embarrassingly inexperienced and a slut, hearing rumours I am both desperate for a poke and a dicktease; in my twenties losing count of the times my breasts and thighs are groped, my bum slapped and squeezed, my hand pulled and head pushed towards dicks by both strangers and boyfriends and being angrily called a bitch for not responding favourably; being slapped in the face, screamed at and wanked in front of in public; being sexually assaulted more than once and not telling anyone because it was obviously my fault; in my thirties finally telling close friends and finding out that nearly every one of them has been sexually assaulted. Feeling lucky compared to what has happened to them.

Environmental and social justice organisations don’t exist outside the patriarchy, so it shouldn’t be a surprise that gender injustice persists within them. But it does cut deeper when it happens and is not addressed or even noticed.

Some of my experiences feel too small to be worth mentioning but it’s the endless drip feed that wears you down. Some of them are bigger. Whenever they occur, big or small, I get the same sick feeling of suppressed rage and overwhelming doubt – is this ok or not?  A big deal or not? Should I say something? What’s the right way to do that? Will that just make things worse?

I am talking about a colleague who arrived four years after me proudly telling me he’s getting paid $10,000 p.a. more for the same job, and remembering back to when I’d started on the lowest salary band, writing (a real letter) to the chairperson to ask if my skills and experience had been taken into account and receiving no reply.

Being told to do the wrong thing by a new manager who doesn’t understand my job, him pointing in my face, going red with rage and yelling, “that is a direct order”.

Having a member of the management committee of the organisation I worked for tell extensive lies about me – someone I’d barely interacted with outside of meetings. Him telling me to meet him in a café and being told by him I’ll have to “lose some skin”. Being called into a meeting and pretend-sacked by him and two other committee members, despite having resigned three weeks before. Him trying to prevent me being paid out long service leave. Never being asked if the lies were true or given an apology.

Saying yes to a project on the explicit condition that I would not be required to work with a person I chose to no longer, due to the impact his chaos and agro behaviour had on my work and mental health. That person taking control of the project. When asking how this situation would be managed, being told everyone just needed to cooperate and I should hand the project over to him.

These brief descriptions are just the tip of icebergs of bullshit. The exact same bullshit I hear from friends, colleagues, activists constantly. 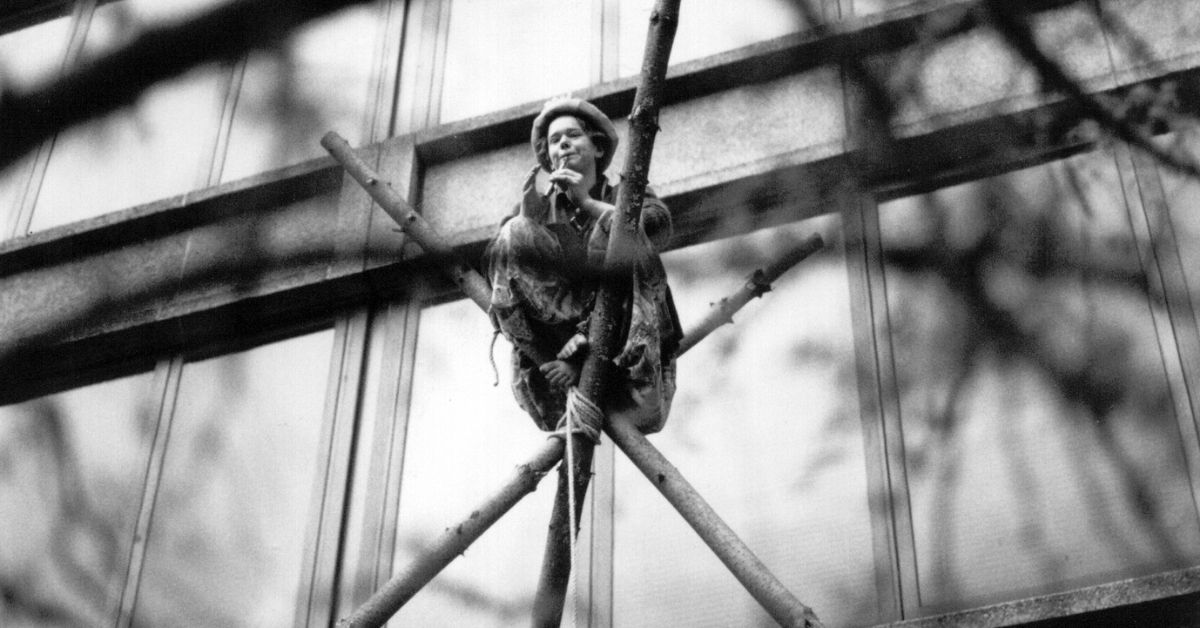 Women, and gender diverse folks have always played a key role in environmental and social justice struggles and are entitled to a safe place to organise.

I studied and volunteered since my early twenties to gain enough skills and experience to get the job I really want – working to protect forests. For a long time I assumed I wasn’t being taken seriously because I didn’t have the skills and experience of those around me. But nearly 20 years later, even with the conveyed legitimacy of being paid to do this work, there’s plenty of times I’m not taken seriously, plenty of the times by younger less experienced men.

I now purposely do environmental and social justice work, paid and unpaid, with groups of incredible, encouraging, supportive, strong, inspiring, exceedingly cooperative people in which the vast majority of the group, and those making the decisions, are not straight white cis men. The contrast is startling. No one’s mood dominates the atmosphere. Everyone is taken seriously. Everyone is listened to and given equal say. We know we all have different skills, experience and perspectives to share.

I am heartened by the changes I see in environment and social justice movements in the last few years with many new people getting involved who just won’t accept the behaviour that wasn’t even recognised as problematic when I got started twenty years ago (you’d hope so, hey!). It is incredible to see women and non-binary folks call things out, come forward, speak up and take on roles up the front.

This is not to say that these movements haven’t always been full of incredible, brave and strong people pushing against this internal tide. And maybe lots of us (I did) felt like we had to spend our energy almost exclusively on trying to stop one particular injustice or ecocide in order to have any impact at all. I’ve come to realise that the patriarchy, the ecocide and all other forms of oppression must be taken on together because they are inextricably linked and are sucking us of power and motivation as well as being unjust and deadly.

I am aware that these words are nowhere near as powerful as the rage I feel because the patriarchy is masterful at inculcating fear and doubt and undermining worth – all of which I feel as I write.

I’m aware that I’m in a very privileged position and benefit from the oppression of other people, that in this country, where I live on stolen Dja Dja Wurrung land, allyship with the fight of First Nations people for Sovereignty, self-determination and care of Country is the foundation of the better future we all fight for. It’s the foundation of any future at all.

Sarah Day is a forest campaigner who has worked in diverse environmental and social justice organisations and was the FoE Community Campaigner for the 2018 Victorian election forest campaign.

This article was first published in Chain Reaction #140.