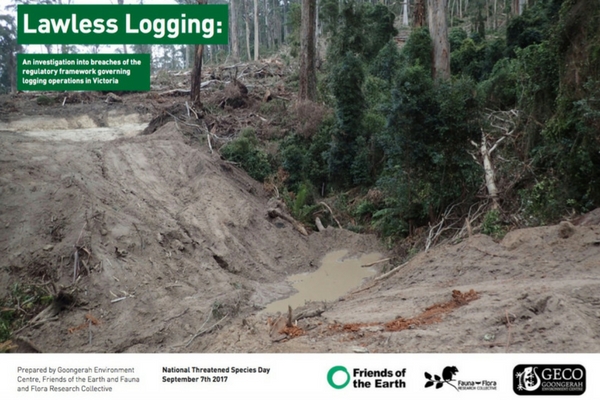 The Lawless logging report has been prepared by FoE in partnership with forest survey groups Goongerah Environment Centre (GECO) and Fauna and Flora Research Collective (FFRC).

Victoria's forests and threatened species are in crisis. Logging in critically important habitat is pushing endangered wildlife towards extinction.

Legal protections for Victoria's wildlife are not being followed by VicForests and are not being enforced by the Victorian Environment Department.

TAKE ACTION>> Join with us to call on Environment Minister Lily D'Ambrosio to enforce our environment laws and protect Victoria's threatened wildlife from native forest logging.

The Lawless logging report prepared by Friends of the Earth, Goongerah Environment Centre and Fauna and Flora Research Collective details 27 logging operations carried out by state owned logging agency VicForests, that have breached legal protections for threatened wildlife and protected rainforest since the Andrews Labor government was elected.


All 27 cases of logging that the report details were reported to the Department of Environment, Land, Water and Planning (DELWP) by community groups over the last three years. Friends of the Earth says these community groups have been doing the job the Department should be doing and are acting as unofficial regulators of the logging industry.

Friends of the Earth believe that it should not be left up to the community to find threatened species at the 11th hour before their habitat is bulldozed and pulped for cheap copy paper. The Department are outsourcing their responsibilities to the community whist turning a blind eye to appalling logging practices that are breaching legislative protections and fast tracking the extinction of forest wildlife.
It is hoped that the report serves as a wake up call to Environment Minister Lily D’Ambrosio that her Department is failing in its responsibility to protect threatened wildlife and enforce the laws that the government’s logging agency must follow.

Friends of the Earth's Ed Hill described DELWP as "weak, ineffectual and lacking the will to appropriately enforce compliance" suggesting that an independent statutory body should be established to take over the Department's regulatory role.

“The Department consistently defends the interests of the logging industry, which is completely out of step with their responsibilities to enforce the logging laws and protect threatened species. Forest dependent species are paying the price, under a dysfunctional and broken regulatory system that ignores scientific evidence and places the interests of VicForests logging above the law,” said Ed Hill

Victoria’s threatened species are in crisis, the government’s own scientists have warned that forest species such as the Leadbeater’s Possum and Greater Glider are facing extinction and need urgent protection from logging. The Labor government must act to protect Victoria’s native forests and threatened wildlife from logging by declaring the Great Forest National Park and new reserves in East Gippsland that protect the regions high conservation value forests and rainforest.

The report calls on the Andrews labor government to act on four key recommendations.