Friends of the Earth Australia welcomes the majority report finalising the Senate Committee Inquiry into the Trans Pacific Partnership (TPP). Whilst we concur with the Australian Greens and Senator Nick Xenophon that the recommendations are lacking in strength, the report nevertheless spells the final death knell of the TPP. As the committee states, “Given the clear position of the Trump administration, it is apparent the TPP will not enter into force in its current form”. 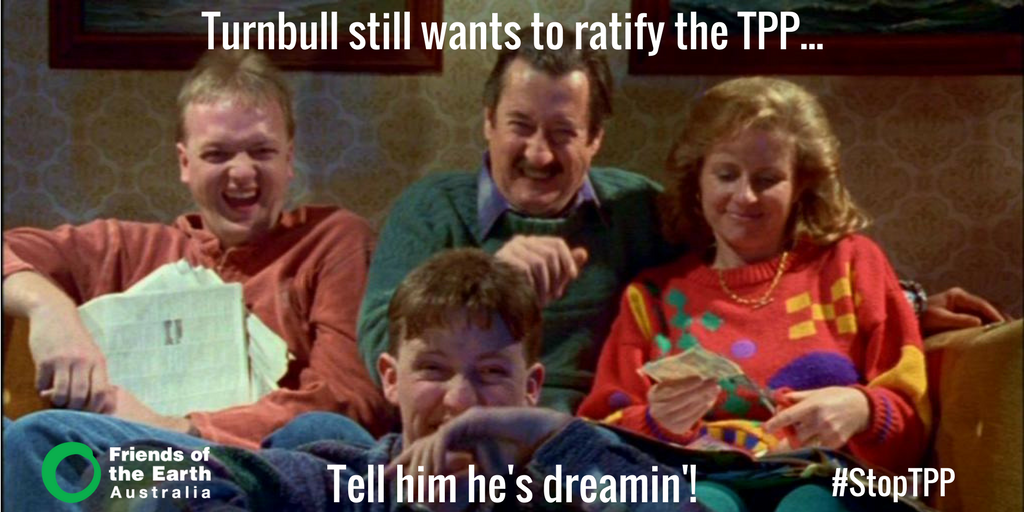 Despite indisputable evidence of the TPP’s demise, the Government seems strangely determined to push through enabling legislation. Indeed, the report observes that, “the Australian Government has indicated that it still may attempt to ratify the TPP through introducing implementing legislation into the Parliament… it is not clear to the committee why ratification should be a legislative priority… it would be unproductive for the Australian Government to commit resources to passing implementing legislation which will not commence if the TPP does not enter into force”.

“The Prime Minister’s determination to continue flogging the dead TPP horse, despite irrefutable proof of its demise, is symptomatic of his ineffective leadership on this and many other important issues”

The Senate Committee’s majority report highlights major concerns about the trade deal that have been voiced repeatedly by Friends of the Earth and a multitude of other organisations and individuals; including the lack of transparency in the negotiating process, the lack independent economic modelling and review, the lack of enforceable labour and environmental standards, the lack of protection for biologic products, the draconian intellectual property provisions and the risks associated with Investor State Dispute Settlement (ISDS) provisions.

“While we welcome the recommendations by the Committee they do not go far enough when it comes to the Investor State Dispute Settlement (ISDS) provisions. ISDS is a dangerous mechanism designed to benefit corporations at the expense of the community. In order for any future trade deals to benefit the Australian community, it is essential that legislation be passed banning its inclusion in those deals.” stated Ms Moore.

The Committee’s second recommendation, that the Government “expedite widely supported reforms to the treaty-making process”, is a welcome acknowledgement of the dire need to democratise Australia’s treaty process. Notably this recommendation was echoed in additional comments from the Greens, the Coalition and Senator Xenophon, indicating bipartisan support for prioritising reform to the treaty process.