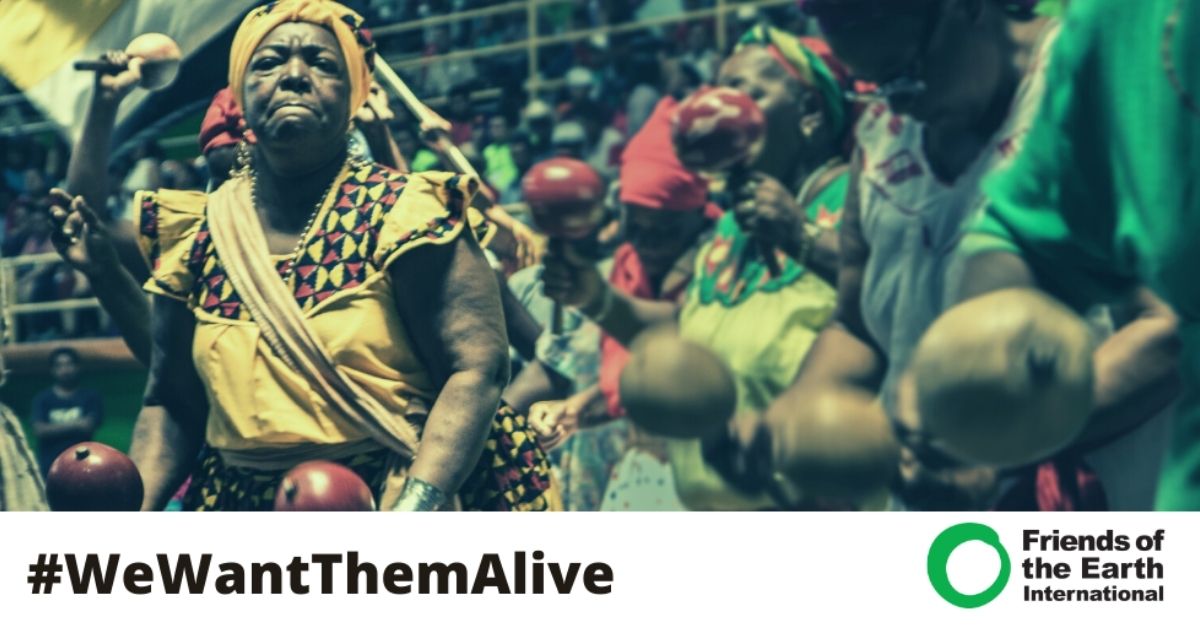 Friends of the Earth Australia has joined a host of international groups in signing a letter to the Honduran Government demanding the safe return alive of kidnapped Triunfo de la Cruz comrades.

Listen to Friends of the Earth's Real World Radio for more information.

From the Triunfo de la Cruz community in Tela city, these comrades were members of OFRANEH, the Afro-Indigenous Garifuna Peoples’ organisation of Honduras. On 18 July 2020, they were abducted from their homes by heavily armed gunmen wearing national police uniforms and waistcoats carrying the Police Department of Investigations (DPI) badge.

Ever since, and despite continued complaints by national and international organisations and movements, the Honduran authorities have failed to respond effectively to queries regarding ongoing investigations into the whereabouts of the four kidnapped men.

As is well known within and beyond this Central American country, the indigenous Garifuna community of Honduras has been suffering systematic attacks for several years now. These attacks are perpetrated by banana and oil palm companies, among others, and more recently from land grabbers for housing and tourist developments. OFRANEH’s longstanding democratic and legitimate commitment to defending the territory, and their ongoing public denunciation of violations of peoples’ rights and their own human rights, has made the organisation’s members into targets of attacks. They repeatedly face threats, persecution, killings and despicable actions such as the one we here denounce: the kidnapping of those who oppose the neoliberal model of privatisation and commodification of the territories and natural resources upon which communities rely.

According to information gathered and examined with support from resisting peoples and organisations that monitor human rights in Honduras, the Indura hotel on the Honduran northern coast, and the Punta Izopo National Park in Tela, have been denounced by locals for misappropriating land and driving out local people. Similarly, real estate development companies Macerica and Idetrisa have been reported for illegal land possession.

Garifuna peoples have not been consulted about any of the projects developed by these companies, as is legally mandated in order to comply with the right of Indigenous Peoples to Free, Prior and Informed Consent, under the International Labor Organization’s (ILO) Convention 169, ratified by Honduras in 1995.

The attacks have seen a sharp rise since 2015, when the Inter-American Court of Human Rights (IACrtHR) ordered the restitution of land and reparation of damages for the Triunfo de la Cruz community. The complaint was filed at the Inter-American Commission on Human Rights (IACHR) in 2003, and admitted on 14 March 2006. On 8 October 2015, the IACrtHR issued a ruling against the State of Honduras for all these acts of violation of the territorial and collective rights of the Triunfo de la Cruz community. That ruling establishes the State’s responsibility and obligation to guarantee the rights of the community, repair damages, and ensure adequate mechanisms to prevent the repetition of such acts. Yet so far, almost five years later, the ruling has not been enforced and the community is still being violated. In 2019, 17 people were murdered—11 men and six women.

Recently and for many years, our regional network of environmental justice organisations, Friends of the Earth Latin America & the Caribbean (ATALC), has been denouncing the vicious violence endured by organisations, movements and communities in Honduras. ATALC has compiled information, documented complaints, and placed on the ethical and historical record the appalling situation to which the Garifuna people have been driven, with no decisive action being taken by the State and the successive governments in office to address it. In view of the increasing criminalisation of these indigenous people, along with combined strategies of community dispossession and continued violation of their rights, Friends of the Earth International reiterates its condemnation and denunciation of the kidnapping of the Garifuna community defenders. Furthermore, we denounce all crimes against humanity inflicted on community leaders—who, as political subjects, resist the destructive model and defend their ancestral territories. These men and women are fundamental in ensuring dignity for working class lives.

As an organisation fighting for environmental, social, economic and gender justice, we strongly denounce the systematic violence that is being inflicted on the Honduran people. Every day results in more victims, more men and women murdered and more families unable to meet their basic needs. Meanwhile, neoliberalism is plundering territories to benefit transnational corporations, who are profiting from the COVID-19 pandemic that their irresponsible and criminal actions only exacerbate.

Furthermore, given the prevailing impunity in Honduras, which we here denounce, we join forces with social organisations there, calling for internationalist solidarity and demanding from the national government:

We call on the international community, organisations, movements and social movements around the world to add their voices of denunciation and to closely monitor the unfolding of these events. We stand in solidarity with OFRANEH and all the Honduran social and popular organisations and movements. We will continue our internationalist solidarity until the kidnapped comrades are found alive and the systematic violence and attacks against our peoples are stopped.