Stand up for democracy - say no to the anti-espionage bill 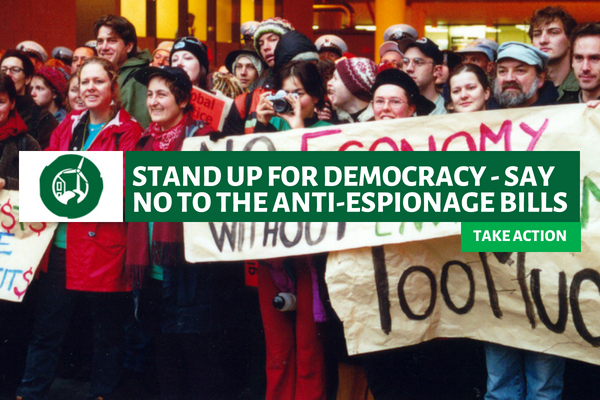 The Australian government is seeking to introduce new espionage and foreign interference laws that threaten our democracy.

On face value they could be seen as being about modernising the laws that are meant to tackle foreign interference in Australia’s domestic affairs. But a closer look reveals a dangerous agenda which will limit the ability of Australians to exercise their democratic rights and potentially criminalise people for protesting.

The Coalition governments under both Tony Abbott and Malcolm Turnbull have long pursued an agenda to limit the ability of the environment movement to campaign effectively to protect people and planet (check here for a background to this campaign). We need to see these current Bills (and the associated foreign donations legislation) as part of this campaign, which has been engineered and driven by the most conservative forces in the Coalition and their allies in the fossil fuel sector and Institute of Public Affairs.

Labor leader Bill Shorten says that the opposition “won’t support anything that punishes the charity and not-for-profit sector”. We welcome this statement. The Greens have already said they oppose the Bills in their current form. It is essential that the ALP announce that they will vote against the Espionage and Foreign Influence Bills while they include reference to charities.

Liberal and Labor MPs say the attorney general has veto power over prosecutions and will choose not to prosecute journalists, whistleblowers and community groups. But if the government doesn’t intend to prosecute civil society for these new offences, why are they included in the bill at all?

Why should we be worried?

Any attempt to limit peaceful protest is a direct attack on democracy. The robust democracy we enjoy in Australia has been created through organised citizens movements forcing greater accountability on governments and corporations and the creation of laws which protect people and environment. Peaceful protest has always been a part of this process.

These Bills will create new offenses in the areas of espionage and sabotage.

Even if prosecutions aren’t carried out, the mere threat of them could have the effect of silencing civil society.

In 2016, the UN special rapporteur on human rights defenders, Michael Forst, said he was “astonished to observe mounting evidence of a range of cumulative measures that have concurrently levied enormous pressure on Australian civil society”. Earlier this year UN officials warned the federal government that some of the proposed changes to national security laws mooted in drafts of the proposed legislation would impose “draconian criminal penalties” on freedom of expression and could potentially be “inconsistent” with international treaty obligations.

There are a number of specific concerns about these Bills:

Under new espionage offences, a person – a journalist or concerned citizen or whistleblower – could be imprisoned for reporting on breaches of international environmental law by the Australian government.

Protest: Protesters who blockade a railway to an export coal mine could face 20 years behind bars for “sabotage”. A wide range of ‘critical infrastructure’ is included in the legislation, which could impact on climate activists, farmers concerned about drilling in their region, coastal communities worried about coal shipments and so on.

What can you do?

1/ Please contact the ALP and urge them to oppose the Bills in their current form.

3/ Ask your friends to do the same.

4/ Please consider making a donation to support our work. These ongoing attacks on groups like FoE are a significant drain on our resources and divert staff from their real task of protecting the environment. You can donate here.

______
Please see this report from Hands of Our Charities for more information.