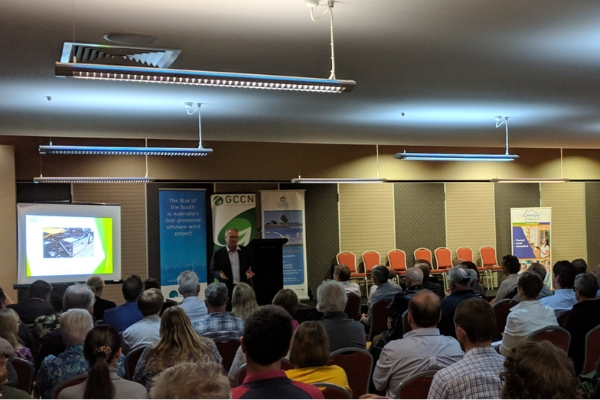 With Australia’s first offshore wind farm Star of the South capturing the community’s imagination, Friends of the Earth made a trip to the Latrobe Valley last week to get an update about the proposal and hear what people in the region think.

At a Renewable Energy Network meeting hosted by the Gippsland Climate Change Network (GCCN), Star of the South was at the top of the agenda, with Andy Evans co-founder of Star of the South providing an update about the offshore wind farm and what it means for the Latrobe Valley.

Members of the local community, and leaders in the region, responded exceedingly well to the project and asked pressing questions of Evans.

We asked Jennifer Barfoot, an active member of the Morwell community, about her feelings towards the proposal. She said she was “really exciting because we will get a lot more jobs back here and will expand all the way down to Yarram around the coast.”

Click here to support our work to say Yes2Renewables

Thinking industrially, Jennifer highlighted that “there are so many skills here used to working on big projects” and that the “infrastructure is already here”.

When asked about the engagement of public opinion, Jennifer expressed that “people have to learn to change their thinking… we’ve always had coal here”. She said the “[community] have to be confident that these other ideas are certainly worth a thought”.

The Star of the South is expected to create a ‘new era’ of opportunity and investment for the Gippsland and Latrobe Valley region and its people.

Chris Barfoot, Project Officer at the Community Power Hub Latrobe Valley, described the current operation of the coal industry as the “preservation of a corpse”.

He asserted the need to be looking into the future for industry to “grow and expand” through renewables, and Star of the South is a prime example.

The project’s capacity to hugely reduce carbon emissions seems a no-brainer for Caroline Crossley, a Councillor in the Wellington Shire.

When asked about her vision for the Star of the South, Crossley responded, “It is a hugely important and positive outcome, not only for the environment but also for job creation; and pivoting away from the traditional energy resources of the coal [whilst] retaining Gippsland as the major producer of energy for Victoria”

It’s a view shared by Loraine Bull, Vice Chair of Gippsland Climate Change Council Network who said, “we see Star of the South as a wonderful way to do a planned transition away from coal and bring new jobs and training to the region”.

Bull affirmed that the “community are very positive” and Star of the South proves a “great way to re-jig our economy into the future”.

After many months of delay Angus Taylor, the exploration license for the Star of the South has finally been approved. At last week’s forum, community members expressed disappointment with the delay.

Ms Crossley expressed her disappointment for government inaction. She said, “there seems to be excuses that there is no framework… there’s been developments around the world it’s not new technology”.

“It’s been frustrating for the community and the company that this is holding it back…it seems ridiculous that it’s taking this long” Ms Crossley said.

“Angus Taylor says he doesn’t like wind, but it’s government policy to try to support the Latrobe Valley through this transition. For the life of me I cannot understand why they are not grabbing this opportunity by both hands and running with it”.

Now that the licence has finally been approved, the Latrobe Valley has the chance to grasp the big economic opportunities on the horizon.