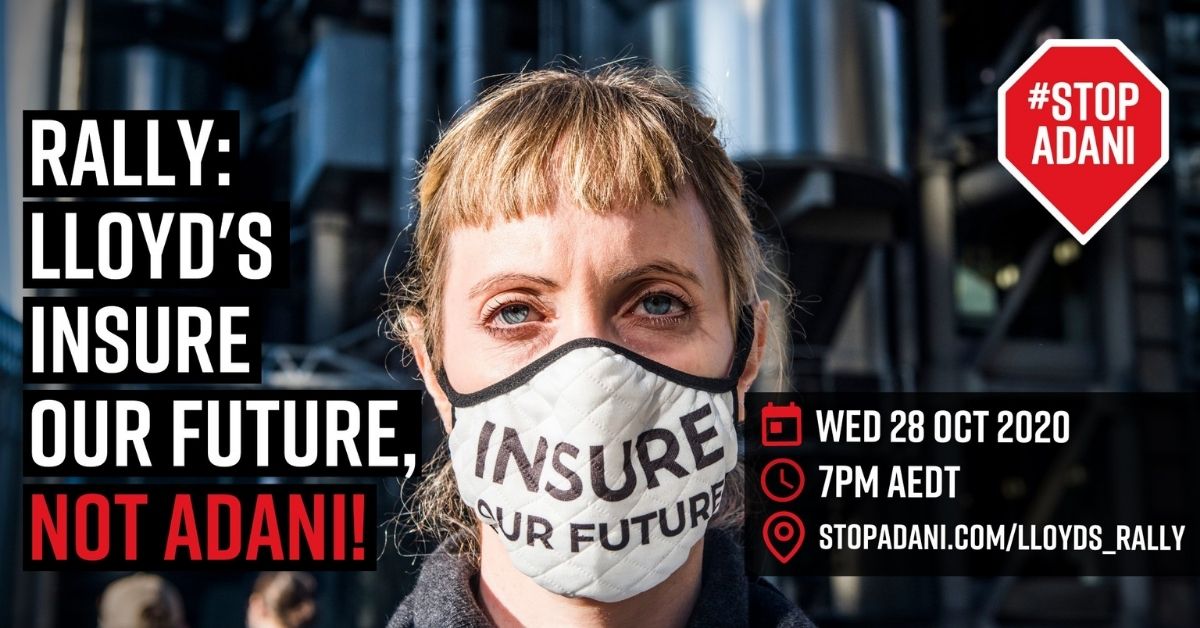 On Wednesday 28th October, people working for a safe climate future from around the world will converge at the Stop Adani online rally: Lloyd's Insure Our Future, not Adani’s mine!

Adani are desperately searching the Lloyd’s of London insurance marketplace for the insurance they need to build their destructive mine.

But people in Australia aren’t the only ones who want to stop Adani’s disaster project and get Lloyd’s of London to take action on the climate crisis.

Allies from the Pacific Islands, the UK and Poland also want Lloyd’s to stop acting as the last refuge for climate wreckers like Adani - and will be joining people like you at the online rally!

RSVP for the online rally

The day before the online rally, allies are taking action in London to maximise our impact - they will be delivering postcards filled with hundreds of faces of people from Australia and the Pacific right to the doorstep of Lloyd's of London, sending a clear message - rule out Adani.

Twenty-three insurers have already ruled out Adani, including many Lloyd’s insurers. Consensus is building in the insurance world and Lloyd’s is currently assessing their own exposure to fossil fuels, with a report due by the end of the year. Right now we have a powerful opportunity to get Lloyd’s over the line and get them to rule out helping Adani dig and burn more coal.

Online rally: Lloyd's Insure Our Future, not Adani’s mine!
When? Wednesday 28 October, 7pm - 8.15pm AEDT - timed to optimise our impact on Lloyd’s.
Where? Online! Click here to RSVP and we’ll send you the link to join.

For those who joined the first Stop Adani online rally back in May to pressure Marsh - we know they can be heaps of fun, hearing inspiring updates from global campaigners and taking powerful, collective action together.

#StopAdani legends like Carrie have been pressuring Adani's potential insurers for months, calling on them to say NO to...