Friends of the Earth stands in support of Black lives 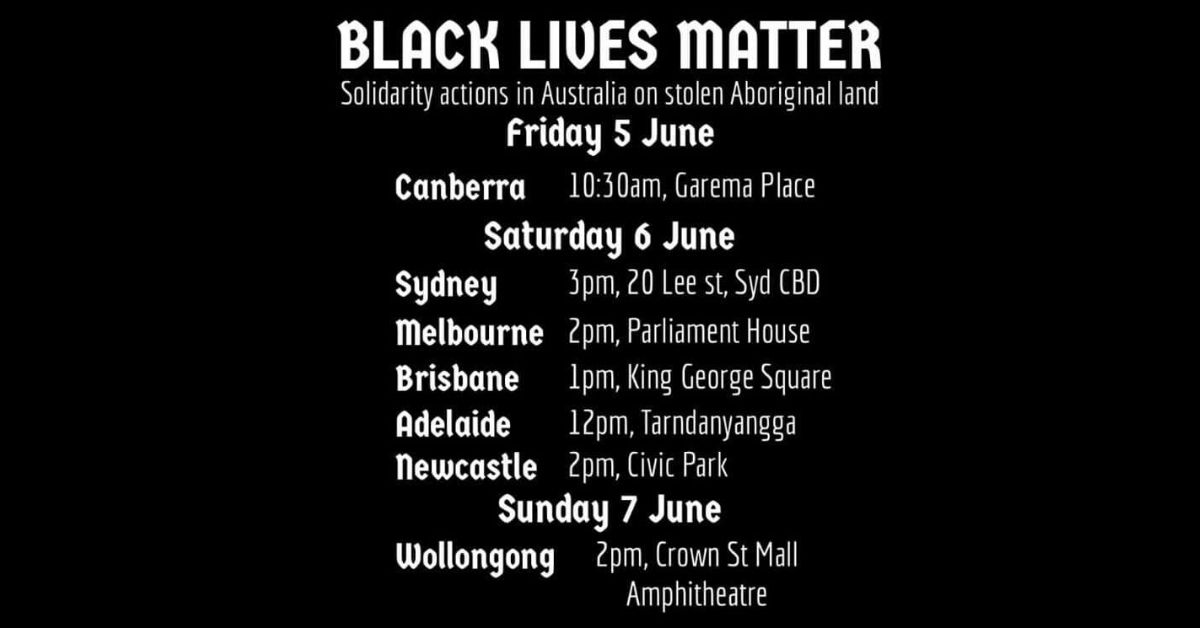 Friends of the Earth Australia stand in solidarity with the uprising for Black lives in Minneapolis and across the United States.

We are horrified by the murder of George Floyd at the hands of the police force. But while we are horrified, we are not surprised. The violence of the police hits African Americans, First Nations, Latinos, Asians and other minorities hardest, and has done for centuries.

Sadly this is not just a travesty of justice in the USA. Globally, Indigenous people face the repression of states and their police forces. In Australia, as in North America, the country was established through colonisation characterised by massacres and attempted genocide.

This is not a story from the past: At least 432 Indigenous people have died in custody in Australia since 1991.

In addition to police violence, Indigenous people in Australia continue to face threats to their lands, waters and sacred places by mining and resource companies.

Indigenous people have always resisted. We honour that resistance, commit to be allies in their struggles, and declare our support for Black Lives Matter and the movement to end Black Deaths in Custody here in this country.

If you are thinking about attending one of the rallies, please check with local information regarding any safety concerns, but this advice was put out by rally organisers in Narrm/Melbourne and Meanjin/Brisbane Warriors of the Aboriginal Resistance (these events are not being organised by Friends of the Earth):

Below is a statement from our sister organisation Friends of the Earth U.S.

Friends of the Earth U.S. condemns the murders of George Floyd, Breonna Taylor, Tony McDade, and Ahmaud Arbery, and the continued state-sanctioned violence against Black people in the United States. Today and every day, we declare Black lives matter.

These recent acts of police violence are consistent with a larger system of racism in this country, present since the founding of the nation. We are witnessing the ways in which this systemic racism is manifesting at this moment: the disproportionate and militarized police violence Black people experience when exercising democratic rights to protest; the state’s violent neglect of Black communities during the current Covid-19 crisis; and the active and ongoing suppression of the fundamental right to vote. We also recognize the many ways in which Black communities experience environmental racism, disproportionately bearing the burdens of pollution and toxic exposures.

Echoing the demands of frontline organizations, in this moment we call for: the defunding of police departments, the reallocation of resources directly to communities for healthcare, housing, and economic opportunity, and the full prosecution of all police involved in the recent murders of Black lives.

Friends of the Earth U.S. reiterates its solidarity with our Black staff, members, allied organizations, and Black communities across the United States in the fight for social, racial, and economic justice. George Floyd, Breonna Taylor, Tony McDade, Ahmaud Arbery, and countless others should still be alive today. We recommit ourselves to doing the necessary advocacy, organizing, and mobilizing to dismantle systemic racism in achieving a more healthy and just world.

Please join us in demanding that all four officers involved in George Floyd’s murder are held accountable.