Shell Oil, one of the biggest climate polluters in the world, finally faces court in December

This is a potential game-changer because if successful, Friends of the Earth Netherlands historic climate case against Shell would rule that the oil corporation must reduce its CO2 emissions by 45% by 2030 and to zero by 2050. This would have global repercussions that would extend to Shell's investments in Australia. 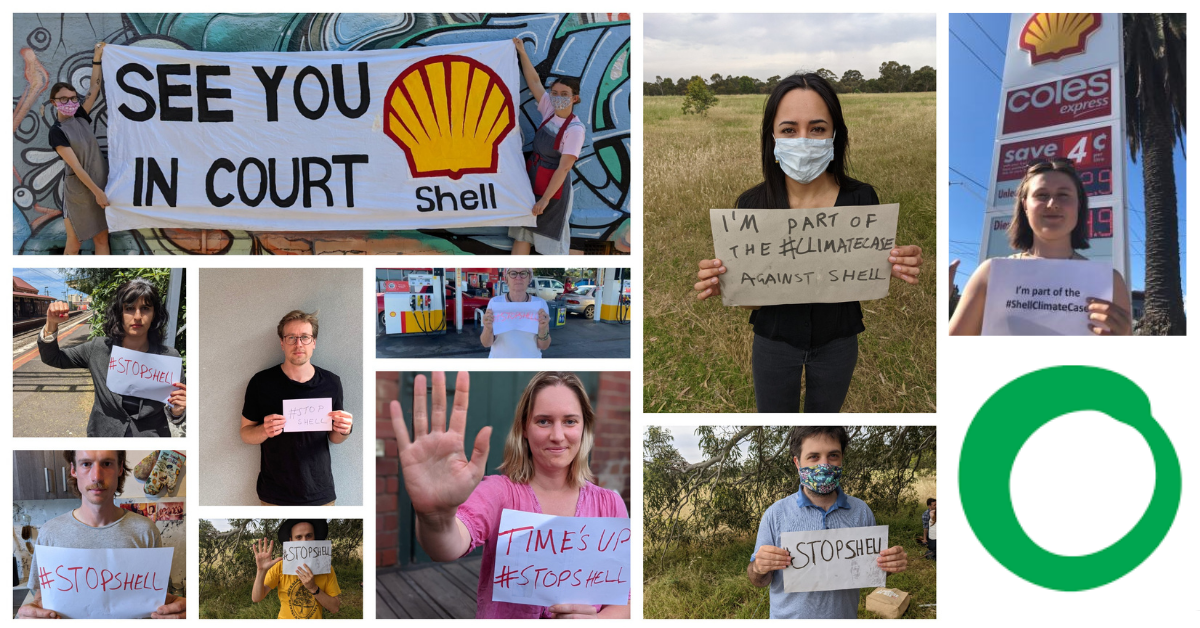 Thousands of co-plaintiffs and supporters around the world demand Shell stops climate destruction.

The groundbreaking Dutch climate case against Shell reaches the courtroom this December, with public hearings on 1, 3, 15 and 17 in The Hague, Netherlands. If successful, this case would rule that Shell must reduce its CO2emissions in line with the Paris Climate Agreement.

Friends of the Earth Netherlands (Milieudefensie) director Donald Pols: “This is a unique lawsuit with potentially significant consequences for the climate and the fossil fuel industry globally. We are confident that the judge’s final verdict will force Shell to adhere to international climate goals and stop causing dangerous climate change.”

Led by Friends of the Earth Netherlands (Milieudefensie), this case against one of the most powerful and polluting corporations in the world is backed by 17,379 Dutch co-plaintiffs, around a million global supporters from 70 countries, and six other Dutch organisations (1). Pols is clear on what the goals are: “This is a historic moment because we are backed by so many people. This is actually ‘the People versus Shell’, a company that has got away with greenwashing for too long. This case will make it clear to everyone that more than 95% of what Shell does is causing dangerous climate change. This has to change as soon as possible.”

For decades, Shell has known that its exploitation of fossil fuels has been destroying the climate(2), yet still it plans to expand fossil fuel operations while devoting a tiny percentage of its portfolio to renewables. The plaintiffs argue that Shell is violating its duty of care and threatening human rights by knowingly undermining the world’s chances of staying below 1.5°C. They accuse Shell of violating Articles 2 and 8 of the European Convention on Human Rights: the right to life and the right to family life. (3)

In the historic 2019 Urgenda case against the Dutch state, the Dutch Appeals court created a precedent by ruling that a failure to achieve climate goals is a human rights violation. The court ordered the Dutch state to cut its greenhouse gas emissions by at least 25% by the end of 2020. A successful outcome in this court case would force Shell to reduce its CO2 emissions by 45% by 2030 compared to 2019 levels.

Sam Cossar from Friends of the Earth Australia said “This case is a potential game changer.  If we win the court case, it could substantially impact on Shell’s operations in Australia by requiring their business to be in line with global carbon targets.  A mere 100 corporations are responsible for the majority of global emissions, and the broader climate litigation movement is based on the precipice of finally holding corporations to account and legally requiring change.”

A public live stream of the hearings will be available through Milieudefensie’s website (in Dutch only): www.milieudefensie.nl/livestream.

(1) With 17,379 co-plaintiffs and six organisations: ActionAid, Both ENDS, Fossielvrij NL, Greenpeace Netherlands, Young Friends of the Earth Netherlands and the Waddenvereniging.

(2) “Smoke and Fumes: The Legal and Evidentiary Basis for Holding Big Oil Accountable for the Climate Crisis (Nov 2017)”, CIEL: www.ciel.org/reports/smoke-and-fumes/

On 5 April 2019, Friends of the Earth Netherlands delivered a court summons to Shell to legally compel the company to cease its destruction of the climate, on behalf of more than 30,000 people from 70 countries.

Interview with Roger Cox, leading lawyer in Friends of the Earth’s case against Shell: