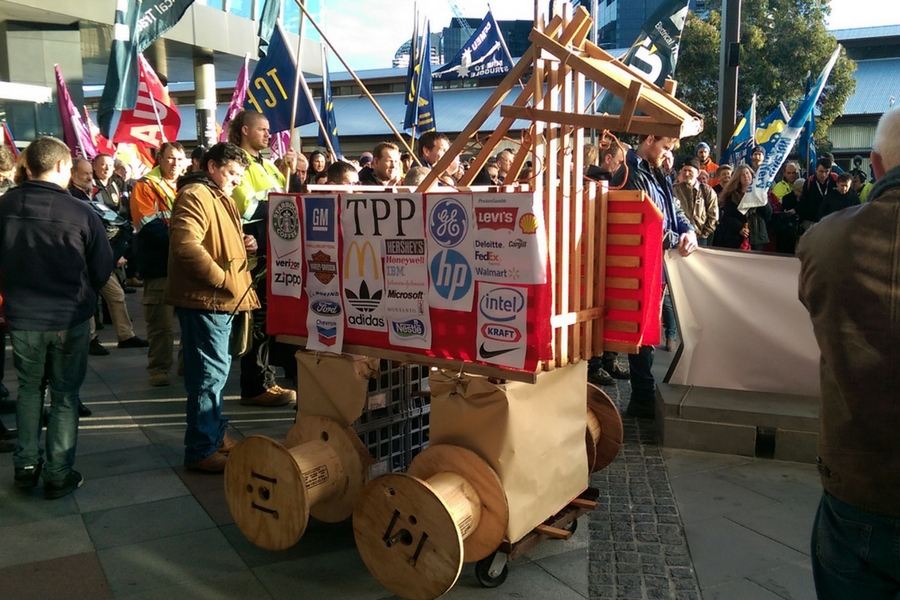 Friends of the Earth is a founding member of the TPP Unions and Community Roundtable. We are committed to preventing the ratification of the TPP, and work with a variety of politicians, unions, community groups and individuals in order to achieve this goal.

In order to accurately score politicians on their commitment to disabling the TPP, the following two questions were emailed to all parties and independents currently holding seats in the upper or lower house:

If Elected, will you:
Those parties and independents who responded with a clear "Yes" to a question received a tick; the Liberal-National Coalition, who have made it abundantly clear that they will continue to push the TPP through regardless of community sentiment have received a cross; where we have not received a response or the response has been unclear, we have left a question mark.
Find out more about the TPP Unions and Community Roundtable and FoE's Economic Justice Collective.
Scroll down to see our media release on the scorecard.

Today the TPP Unions and Community Roundtable Coalition, of which Friends of the Earth is a founding member, has released a Federal Election 2016 TPP Scorecard ranking all currently elected parties' and independents’ stance on the Trans Pacific Partnership (TPP).

In order to accurately score the parties and politicians on their commitment to disabling the TPP, the Roundtable asked two questions:

If elected, will you:

1: Vote against the enabling legislation for the Trans-Pacific Partnership?

So far the TPP Union and Community Roundtable has received responses from the ALP, the Greens, the Nick Xenophon Team, Glenn Lazarus and Andrew Wilkie. As evidenced by their ticks on the scorecards, the Greens, Xenophon, Lazarus and Wilkie all responded with an unambiguous “Yes” to both questions.

However, the response from the ALP demonstrated an alarming vagueness, stating that Under Australia’s treaty-making arrangements the Parliament must examine trade agreements. The review of the TPP by the Joint Standing Committee on Treaties (JSCOT) was not concluded at the time Mr Turnbull caused the dissolution of the Parliament. The TPP will be examined by JSCOT in the next Parliament whoever forms government – that’s how our treaty system works; and that A Shorten Labor Government will not agree to Investor-State Dispute Settlement (ISDS) provisions in new trade agreements. A Labor Government will seek to remove these provisions from existing trade agreements and work to ensure ISDS provisions do not prevent governments from pursuing legitimate public policy goals.

Friends of the Earth TPP and trade spokesperson Kat Moore said “time and again, the major parties have bluffed their way through questions regarding the TPP, committing to nothing, whilst meanwhile our sovereignty is being eroded, and our environment, health, jobs and basic freedoms put at risk. The ALP got us into this Trojan Horse deal; the LNP have pushed it further, with no regard for public opinion or wellbeing. Based on this record, we cannot trust either of these parties to put community interest ahead of corporations.”

Friends of the Earth TPP and trade spokesperson Samantha Castro said “The ALP has stated they are against the Investor State Dispute Settlement (ISDS) mechanism. This is their opportunity to demonstrate that they’re serious about this. We call on the ALP, as well as crossbenchers, to vote against TPP-enabling legislation, and to introduce, or support, legislation to ban ISDS in all trade agreements.”

The scorecard is available here.