"What would happen if we talked of caring for carbon?", asks Aviva Reed, a transdisciplinary visual ecologist, for Chain Reaction #143. Perhaps always thinking of carbon as the "enemy" of the climate erases the place it has in the ecology of life? This beautiful image-essay shares two of Aviva's visual artworks, and radical ecological philosophy about the importance of interrogating our relationship with carbon. 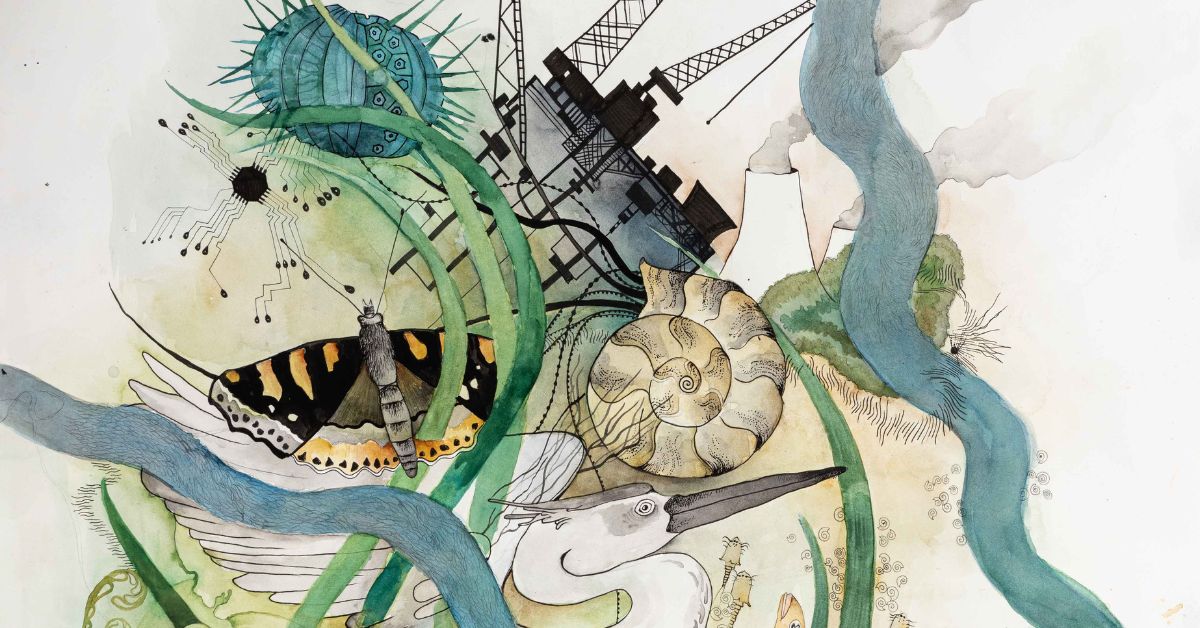 There is an eternal reaction in the chemical realm, carbon is always on the move…. It may be moving in slow time or fast time, but is always moving, changing, shifting, warping, mixing, reacting, loving, joining into community, making community, carbon is the beautiful windy choreography of life and death.

What would happen if we talked of caring for carbon? Carbon has become mythological in the way humans discuss it. Used in the modern lexicon to describe a malevolent, impending doom of emissions, the dominant narratives of carbon are often associated with but just one form of carbon molecule, carbon dioxide. But carbon is far more than a gas that holds heat. Carbon is a form of embodied energy that attracts, repels and builds worlds. Carbon is a ‘trickster’, ‘shape shifter, entity of multiplicities, and offers us a way finding in a time of a changing climate. When we view carbon as both a material and cultural element, we can begin to understand the gifts this trickster molecule may offer.1

‘Transforming carbon (2022)’, explores the world through the lens of carbon as muse, as a chemical agent, with agency. This body of work used illustration, painting, narratives, poems and performance lectures to play and reframe carbon. The process of art making is in itself a methodology for re-searching knowledge, a way to undo the ‘cult of reductionism’2 inflicted upon the world by the western cognitive empire.3 The focus of this project is on western science’s relationship with categories and the chemistry that shapes liveliness.

‘We are carbon thinking about carbon,

We are carbon eating itself.’

Carbon is an element that has a supreme architecture. At the atomic scale, its six prong ring has an excellent capacity to bond with multiple other elements to form chains and membranes. Its form can both keep energy moving through a system (in the form of glucose molecules from photosynthesis), whilst also building the structure of a system (through forming molecules such as calcium carbonate in coral reefs). Both an energy holder and a bone builder, carbon is a shapeshifter. It has a structure that yearns for connection with other chemical elements that can then build phenomenal complexity in the form of DNA chains.

How we discuss, and relate with, carbon matters to how we know, and be in the world. Indigenous peoples and an increasing amount of contemporary scholars have called for the reframing of cultural narratives around ecological relationships as an ethical obligation.5  The shape and symbols created through language is how we make sense of the world. Sense making of the world plays out in legal and financial paradigms. Whilst it is integral to re- vision energy production away from forms rich in carbon emissions, a language of demonizing carbon has dominated the way we approach the current dilemma of a carbon cycle out of balance. A quick audit of how carbon is discussed in the dominant extractive paradigms finds us using words such a ‘decarbonisation’, ‘carbon zero’ and ‘net carbon’ with a strong focus on ‘carbon emissions’. These words exemplify carbon as ‘trickster’ – for whilst carbon in the air and ocean are both reaching saturated levels, terrestrial carbon (carbon in the soil, forests, biodiversity and saltmarshes) are severely depleted. This distortion of carbon in western science narratives neglects the opportunity to create healthy relationships with carbon, with ourselves, with the earth. The process of ‘bringing carbon home’ refers to supporting the transmigration of carbon from the atmosphere into other forms, such as abundant, thriving ecosystems. Enhancing the possibility for biodiversity to exist is creating carbon pathways for both energy and embodied carbon to find a home out of the atmosphere and back into the flow of life. 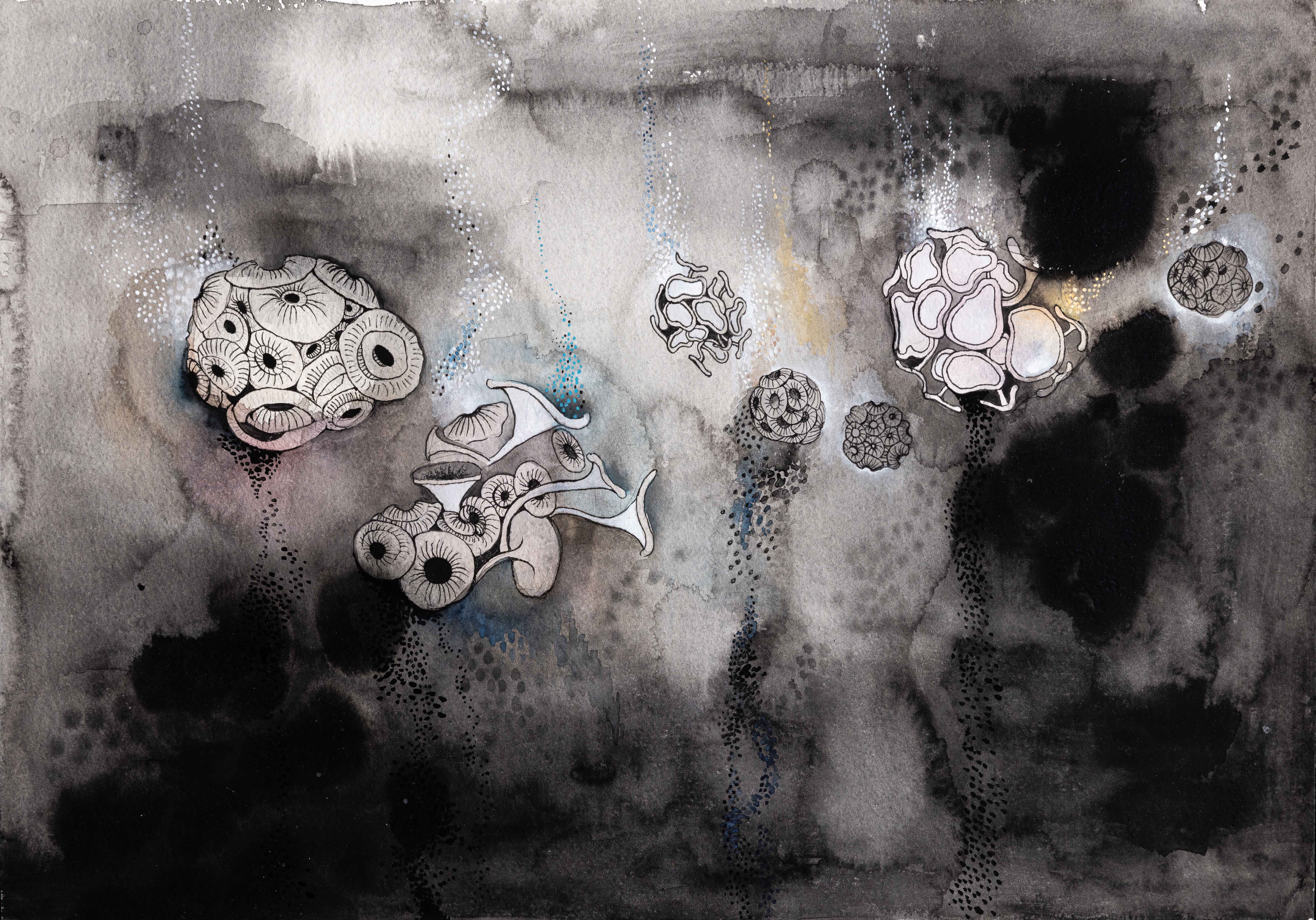 Carbon’s homes have been destroyed not only at a physical level, but also at a chemical level. Carbon’s capacity for bonding has been made obsolete through extractivist practices. It is necessary for the carbon dioxide molecule to become other carbon molecules, to shapeshift, to re-form into molecules in the soil, in the bodies of living things, into sugars to feed life. But most modern day soils can no longer hold carbon due to a lack of hydration and organic matter. Forest soils are burnt with high intensity fires and compacted with machinery during clearfelling, killing the fungi that would normally hold carbon in the soil. The oceans are soaking up carbon dioxide from the air, creating chemical reactions where shells can no longer form molecules for carbon rich bones. A focus on restoring the carbon relationships on earth is what a post extractivist world looks like.

Carbon literacy is our way into caring for carbon. Redefining the language used to describe and to relate with carbon enhances the capacity to perceive the complexity within the carbon cycle. This reframing offers a way to undermine the ‘carbon imaginary’ offered by traditional western sciences. The carbon imaginary is the historical move of western science to claim there is a ‘life’ and a ‘nonlife’, a breaking apart of the bio and the geo.6 Yet, when we tune into carbon as an elemental force, and trace it through our planetary metabolic system, we find an animacy that moves at different rates, that shifts, twirls, combines and recombines through slow times, fast times in deep time. We find that time and carbon are embraced in a living and dying cycle of millennia, the cliffs made of carbon rich plankton bones. This new ‘imaginary’ of collapsed living and dead categories is not a new concept but has always been part of an understanding for Indigenous communities worldwide.7 This honouring of deep time and the liveliness of mountains, rivers and rocks acknowledges the liveliness of flow and the memories of molecular life, with agency, with animacy. 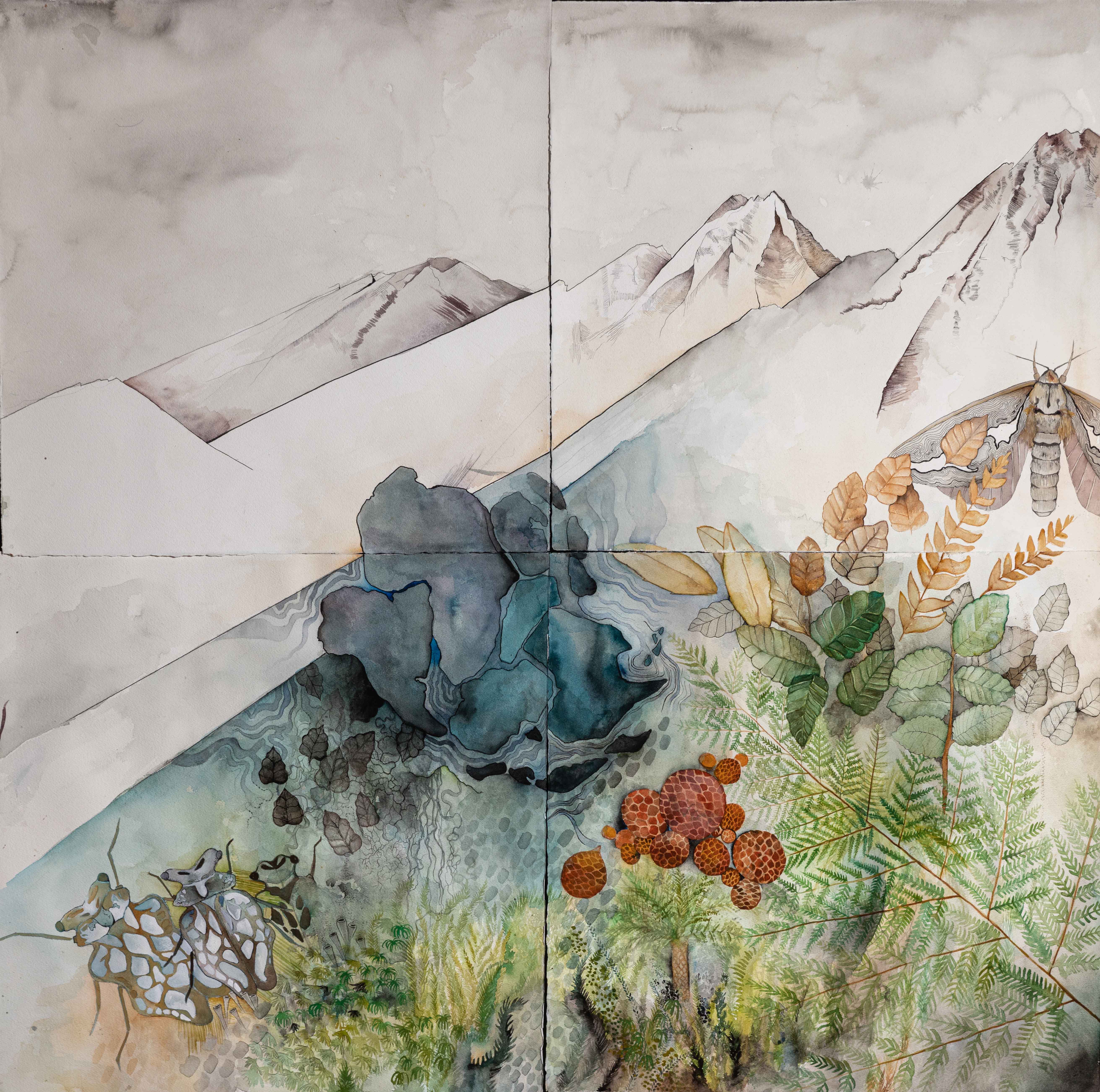 Throughout my practice, western scientific canons such as carbon chemistry and the categories of biotic and abiotic, live through the haptic process of drawing, painting and imagining these ‘invisible’ chemical forces. Dreaming into them as I tease out ideas, I tune into their stories and collapse the ‘carbon imaginary’. There is no such thing as living and dead, bio and geo. In this way, drawing is a way into activating my ecological imagination. This playful space unlocks different ways of thinking. ‘Transforming Carbon (2022)’ found new ways of describing, connecting and being with carbon, as a carbon based life form. These processes initiated an engagement with the waiting ghosts of carbon soon to become ancestors. Thinking between carbon and time and rates of change, carbon as an animate force became very visible. And most, importantly, led me to consider, how we can best love carbon, home carbon and enhance carbons own agency to exist? What language, feelings, insights and imaginings can shift the world to a way of being that reveres and honours the deeply complex nature of things and embraces a world of deep care for the eternal cycles of carbon? How can we support carbon to be its best self?