Trump withdraws from Paris Climate Agreement - what next? 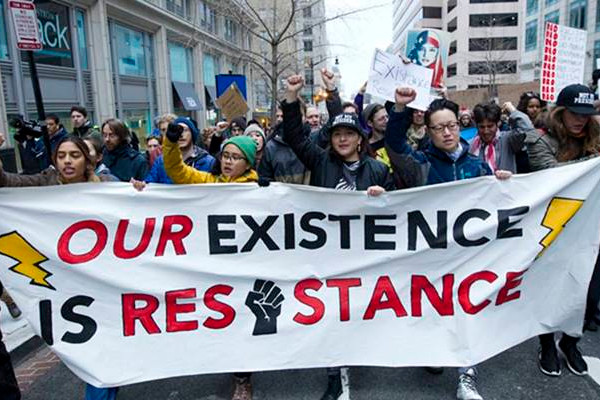 The election of Donald Trump, the Brexit vote in the UK, and the continued rise of Right wing populist parties across liberal democratic nations is a huge concern for anyone who wants to see action on climate change and protection of the environment. Today's announcement that the USA will withdraw from the Paris Climate agreement should not come as a shock, but nor should it be seen as the end of climate action.

As Friends of the Earth International's climate justice and energy coordinator, Dipti Bhatnagar, noted in 2015 when the deal was struck, "Despite the hype, the Paris agreement will fail to deliver. Politicians say it is a fair and ambitious deal – yet it is the complete opposite. People are being deceived."

Paris at best is a starting point for real climate action - not a fait accompli. What is most important now is to continue to build a people power movement and to drive change at a local level. Community empowerment campaigns that tap into the frustrations that have led to the rise of the new Right can and will deliver great social and environmental justice results - one need only look a the recent Coal and Gas Free Victoria campaign as proof that those traditionally Left and Right can work together for real change.

As Friends of the Earth Australia campaign coordinator, Cam Walker, says, "we need to be really sophisticated and separate out the cultural issues around racism, xenophobia and misogyny and the political structural issues around globalisation and that will allow us to find ways to work together."

Closer to home, the expanding electoral success of similar parties, like Pauline Hanson’s One Nation, underscores how this new right wing populist worldview is gaining acceptance in the mainstream.

A common thread running through the new, populist Right is the climate denier and anti-environmental positions. While One Nation senator Malcolm Roberts stands out as a key denier in Canberra, there are many more, and their presence in parliament and the coverage they get in the media emboldens others in the community who hold this view.

While climate change deniers tend to be older conservative Anglo males, the appeal of this new form of politics goes well beyond that demographic. As new constituencies subscribe to an anti-immigration, pro-protectionist, socially conservative agenda, they also get a strong dose of climate denier politics.

Leaving aside the narrow minded and inward looking social and political positions on issues like asylum seekers and foreign aid, there is a direct and immediate problem for us as environmentalists: The reality of climate change requires an urgent transformation of our economic and energy systems.

Yet the new Right are attempting to derail action and re-frame climate policy as being about hurting battlers. Fracking bans and closure of coal equate to higher electricity prices, more renewables to power blackouts, and so on. Most campaign messaging by large environmental groups continues to appeal to middle class interests and values. Yet, the middle class is now a shrinking societal fraction, outnumbered by the working poor, the precariat,  the remnants of the working class, and those excluded entirely from any real social and economic ‘investment’ in what we think of nostalgically as “Australia the lucky country’.

In the economic realm there is a lot to be hopeful about. These profound structural shifts could generate a kind of environmental campaign gloom-saying. But, a nuanced examination actually poses hope from unexpected quarters In opposing ‘free’ trade and the predatory behaviour of many large corporations, the newly re-energized and expanded Right has entered the political space normally filled by progressive movements. The position of senators  Hanson and Jacqui Lambie, on issues like trade demonstrates an alignment between ‘the battlers’ so favoured by the rhetoric of the Right and the environmental and social justice values of Friends of the Earth.

Friends of the Earth has been working to do this for many years now. Two campaigns stand out in the last decade – Yes 2 Renewables, which has successfully built active support for renewable energy in the community, and the Coal and Gas Free Victoria campaign, which helped achieve the first permanent ban on onshore unconventional gas drilling and fracking. We achieved both these results by meeting people where they are, building trust, common cause, and political power, and then flexing that muscle in a strategic way.

The fact is that current political and economic systems work primarily for the benefit of the big players: corporations who avoid paying their share of tax, the fossil fuel companies who have a direct line to the PM, and the conservatives in the federal government who are wanting to cut penalty rates and social welfare. Right wing think tanks like the Institute of Public Affairs (IPA) have a massive influence on policy makers and the mainstream media, promoting radical ideas which would destroy many of the social safety nets that Australians rely on.

People know that the system is broken. The new wave of conservative populism  takes advantage of discontent and dislocation in the community. From FoE’s point of view, what we need is to show that this discontent and dislocation aligns with genuine inclusive progressive thinking and action, that can circumvent the old political parties, and call to account corporate privilege, and addressing climate change and environmental degradation is a central part of this process.