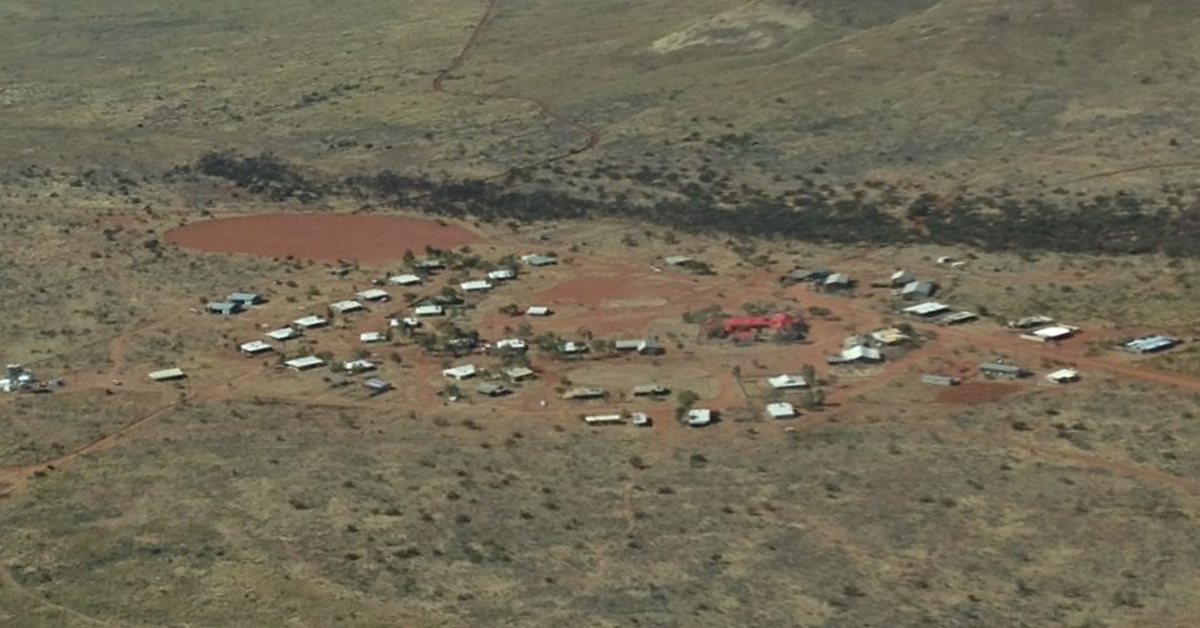 Photo: Parngurr in remote Western Australia is one community which has been exposed to uranium through their drinking water above Australian Drinking Water Guidelines.

Problem microorganisms and contaminants listed in the report specify only E.coli, Naegleria Fowleri, Nitrate and Uranium. It is likely that a swathe of other “untested” contaminants will also be present in many remote water supplies. 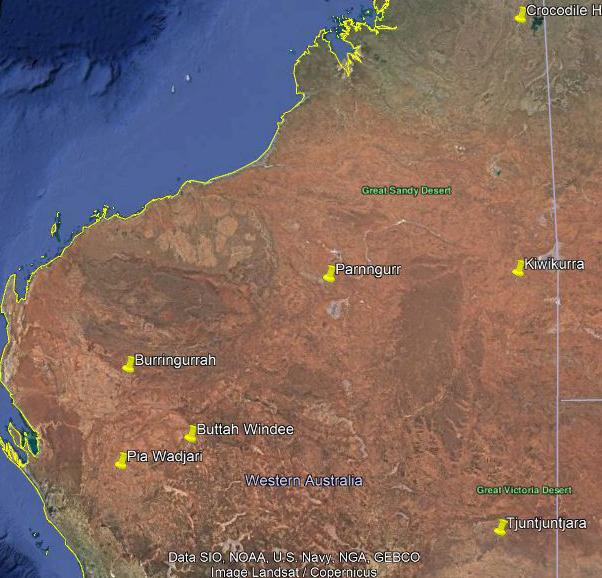 Location of remote communities in Western Australia which have recorded uranium in drinking water above Australian Drinking Water Guideline levels over the past few years listed in the Auditor's report. (Note: Buttah Windee was not listed in Auditor's Report)

E.coli is a thermotolerant coliform and superior indicator for detecting faecal contamination

Naegleria Species are members of the amoebae protist genus and are often found in warm aquatic and soil habitats. Naegleria Fowleri is a causative agent of the lethal primary amoebic meningoencephalitis (PAM). Most Naegleria species are however non pathogenic.

Excessive nitrates can cause the potentially life threatening Blue Baby Syndrome (methemoglobinemia), where the skin turns blue and the baby has trouble breathing. Gastric cancer and kidney problems may also be a consequence of long term exposure to nitrate.

Uranium is a radioactive heavy metal where exposure has been associated with kidney damage. Uranium has also been linked to reproductive problems and DNA damage.

The total number of WA remote residents impacted by uranium above guideline levels in drinking water probably now totals around 500 people (with perhaps an additional 500 - 1000 people in the Northern Territory). There have also been hundreds more people in Queensland and New South Wales exposed to relatively high levels of uranium in their drinking water over the past few years. The majority of people impacted will be Aboriginal.

Uranium in drinking water can be difficult to treat if no alternative supplies can be found. The source of the uranium in impacted communities is sourced from local geological formations and groundwater.

In terms of the recent WA Audit report, the number of WA remote communities impacted by the 4 major contaminants (above drinking water guidelines) over the two different audit periods, were dominated by Naegleria species in 2012/14, followed by E.coli and nitrate. This was particularly so for the Kimberley's and Goldfields regions.

For the years 2018/20 microbiological issues appear to have reduced substantially in a number of communities in the Kimberelys, but many continue to be impacted by nitrate and uranium problems. Levels of detection were not published in the audit report. 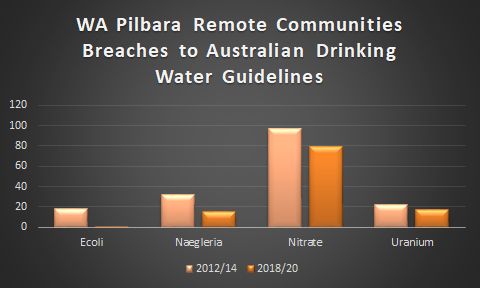 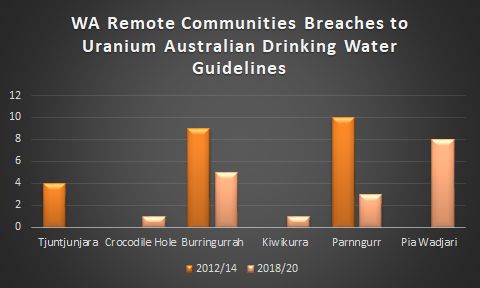 Uranium breaches were confined to four communities in the Pilbara in 2018/20: Pia Wadjari (8), Burringurrah (5), Parngurr (3) and Kiwikurra (1). Crocodile Hole in the Kimberley also reported one breach. Tjuntjunjara, a “Goldfields” community recorded 4 uranium breaches over 2012/14, but none in 2018/20. Total Uranium breaches dropped by ~22% over the time period. No detection levels were printed in the auditors report. They are listed as only breaches to the ADWG (eg uranium >0.017mg/L).

Past records have also revealed that some of the highest levels of uranium recorded in Western Australian groundwater occurred in the Pilbara locations of Yeelirie and Wiluna 75 km north. It is unclear whether this groundwater was used for drinking water. Uranium in the groundwater at Yeelerie was recorded at levels 140 times higher than the safe drinking water limit in 2011, however most of the bores (except 1) sourcing groundwater for drinking water, stock watering or irrigation had fallen into disrepair.

The two biggest challenges in terms of treatment options are a) financing for new treatment technology and b) sourcing alternative supply options. For example, it has recently been estimated $2.7 million will be required to resolve water quality issues at Burringurrah and Pia Wadjari. In April, the NT Government announced a $28m investment ($7m per year for 4 years) to resolve water quality issues in 10 NT communities. Laramba a community with perhaps the highest uranium levels recorded in Australia is one of the communities prioritised.

Reverse osmosis is a treatment often mooted for uranium removing 80-90% of uranium from drinking water. New treatment technologies recently suggested in the NT, aimed at curbing uranium in drinking water include membrane capacitive deionisation and electro chemical technology which may reduce nitrates and heavy metals. These technologies can be expensive and water authorities balk at the cost of adequately servicing remote communities due to the distance and the number of people serviced. Water carting may be a viable option for some of these communities.

The small community of Buttah Windee, located 5km from Meekatharra in WA’s Pilbara discovered uranium above guideline levels in their drinking water in 2009. The community was told by the state government that $500,000 would be needed to sort out the problems and due to the small size of the community it did not warrant the investment. Bottled water was instead supplied and a year later the Government recommended to move residents to nearby Meekatharra. The residents instead decided to get their drinking water carted in from Meekatharra. Government water services ended in 2013. The population of Buttah Windee dropped from 50 to 12 over the next few years.

By early 2019, the community had new technology donated.  Six hydropanels which capture water from the air and produce up to 900 litres of water a month were installed. The community then crowdfunded $26,000 and installed a reverse osmosis water treatment plant for water used at the community fish farm, supplied by a new bore. The plant supplies about a dozen people. 50 people had been living in Buttah Windee but many moved back to Meekatharra due to the poor quality of Buttah Windee’s drinking water. Larger schemes, perhaps by a factor of 20 would be required for larger remote communities with hundreds of people.

Although there have been concerns about Western Australian remote communities concerning drinking water, exact information has been difficult to locate. Most publicity in the past have been associated with levels of nitrate in drinking water.

Despite problems in Western Australia, the Northern Territory also continues to suffer from uranium in drinking water in a number of communities. Chronic breaches have occurred in 3 communities, Laramba, Willowra and Wilora over the past decade and probably much longer. 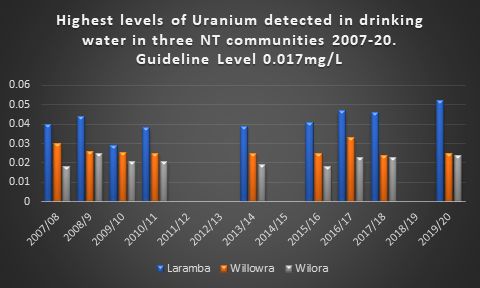 Laramba residents have most likely been exposed to uranium at levels 2-3 times higher than the Australian Drinking Water Guidelines for many years. The highest recorded levels at Laramba each year also appear to be increasing. 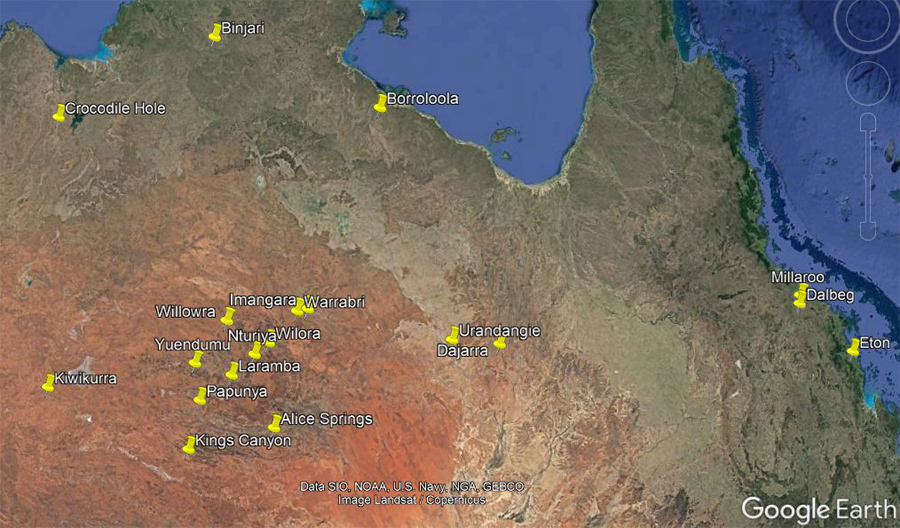 Communities in mainly the Northern Territory and Queensland, which have recorded uranium and radionuclides in their drinking water above guideline levels over the past decade or so.

Uranium in drinking water has also recently occurred in three Queensland communities. The highest levels were detected in January 2021 at Dajarra (population 200 located 1000km west of Mackay) in western Queensland at 0.046mg/L, almost three times higher than the safe guideline. Remarkably this was the first time uranium had been detected in town, although it has been suggested that these levels would have been occurring for decades. Uranium has also been detected in recent years at Urandangie (125km west of Dajarra) at 0.017mg/L and Eton ( located 27km south west of Mackay) in 2016.

Uranium was also detected, along with Selenium above Australian Drinking Water Guidelines in two small north Queensland communities in 2006. The communities, Millaroo and Dalbeg, which the authorities said was caused by groundwater.

In October 2016 uranium above guideline levels was also detected in the New South Wales communities of Kootingal, Moonbi and Bendemeer. Tamworth Regional Council apologised for the “oversight”, which had left residents’ drinking water with high levels of uranium for at least two years. Consumption of uranium tainted water probably went on for many years, but residents will never know as testing by the local council only began in 2014. In 2020 Billimari (NSW) also faced the prospect of being told that they had uranium in their non potable supply.

Radionuclides or radiating emitting elements in drinking water (breaching 1mSv/yr) over the past decade or so have included the communities Kings Canyon, Alice Springs, Borroloola and Binjari in the NT. The Victorian community of Goorambat also recorded levels of Alpha activity for radionuclides over guideline levels in 2012/13.

Wilmington SA, had radon (a radioactive gas produced from decay of radium 226 in soil and minerals) detected in the community above guideline levels of 500Bq/L in October 2018. In South Australia uranium guidelines were breached at Saltia Creek (October 2019) and Woolshed Creek over 2016/17, however at both of these locations water is deemed to be non-potable. 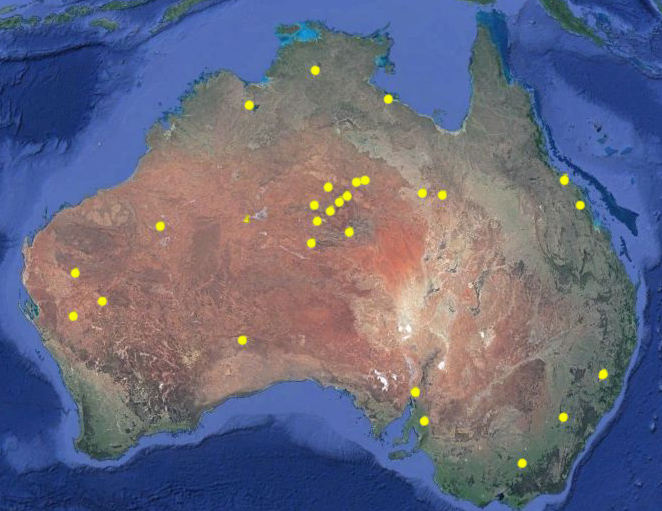 Location of communities across Australia which have recorded levels of uranium and radionuclides above Australian drinking water guidelines over the past decade or so.

In terms of risks from uranium mining to drinking water: In March 2004 28 workers at Ranger Uranium Mine showered in, and drank, water that was contaminated with levels of uranium 400 times the safe maximum under Australian standards… 159 workers were potentially exposed to the contaminated water. Aboriginal people were also reported to have been exposed to the contamination after drinking from a tap that should have been shut off. 200 environmental incidents had occurred at Ranger uranium mine since 1979. In July 2006 100 workers at Beverley Uranium mine in South Australia were exposed to uranium through contaminated drinking water.

Existing and “Decommissioned” uranium mines also continue to leach radioactive water into the environment and will continue to do so for thousands of years. BHP’s Olympic Dam mine has a history including seepage from tailing impoundments into underlying groundwater. Ranger Uranium Mine (where toxic tailings are currently being dumped into pits) has leached contamination into Kakadu National Park, Rum Jungle uranium mine (1954-71) caused Acid Mine Drainage pollution to the East Finniss River where 640,000 tonnes of tailings were discharged damaging 100sqkm of floodplains. Mary Kathleen Mine and Ben Lomond Mine in Queensland have also caused downstream pollution. Anyone downstream of these leaking mine sites could also be jeopardised through exposure to waterways downstream of the mines. Nuclear blasts at Maralinga and Emu Field in the 1950’s also lead widespread contamination of Australia through nuclear fallout, including drinking water reservoirs and water tanks.

More information on uranium issues can be found here

Friends of the Earth is currently compiling more information on drinking water contamination throughout Australia. More information can be found here.